A couple of days ago I started to track down a rather odd paragraph in the Wikipedia article on Christmas trees, and I wrote a blog post on it here.  The article reads:

At the end of the Middle Ages, an early predecessor [of the Christmas tree] appears referred in the Regiment of the Order of Cister around 1400, in Alcobaça, Portugal. The Regiment of the local high-Sacristans of the Cistercian Order refers to what may be considered the oldest references to the Christmas tree: “Note on how to put the Christmas branch, scilicet: On the Christmas eve, you will look for a large Branch of green laurel, and you shall reap many red oranges, and place them on the branches that come of the laurel, specifically as you have seen, and in every orange you shall put a candle, and hang the Branch by a rope in the pole, which shall be by the candle of the altar-mor.”[21]

This in fact refers to a  now lost manuscript that once belonged to the Cistercian monastery of Alcobaca in Portugal.  Those manuscripts are now in the Portugese national library, the Biblioteca Nacional.  This particular one was 32 pages long, and was one of a number which contained sacristy regulations for the monastery.  Originally numbered cod. alc. 151, the manuscript was renumbered as cod. alc. 64 some time during the 20th century.  Many of the Codices Alcobacenses are online;  but not this one, which was stolen from the library in 1948.  A couple of articles contain transcriptions of portions, but I was unable to obtain these.

Since then, a kind correspondent has sent me a copy of Gabriel Pereira, “Trechos portugueses dos séculos XIV e XV”, Boletim da segunda classe da Academia das Ciências, 5 (1911) 319-328, which I have uploaded and link to here.  It is full of interest.

Firstly, the manuscript was not in Latin, but written in Portugese!  This immediately raises questions about just how old the manuscript was.  Pereira does not offer much of a date: he notes that one entry refers to Dom Estavo da Guair, and a regulation by him from 1435.  So the document cannot predate this, but must be later.  He says that it was written in a 15th century hand.  He also states that the document clearly remained in use, because of marginalia in the writing of the 16th and 17th century.

Secondly, the mysterious reference in Wikipedia to “p.330” is explained!  For p.330 of Pereira is as follows: 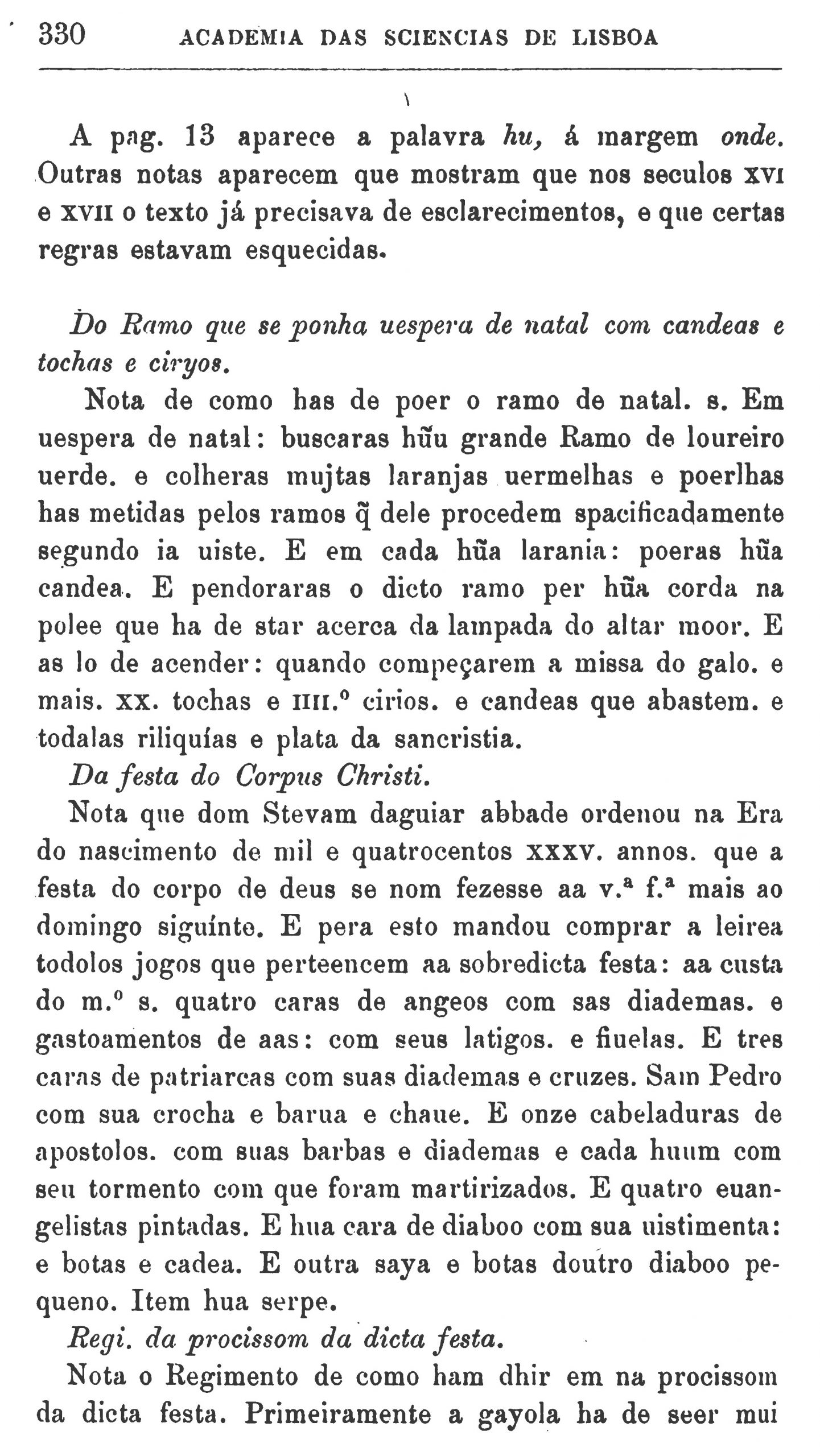 This, then, is the source for the Wikipedia text, although the latter has plainly been copied and “improved” many times since Pereira in 1911.

Using Google translate I get this:

Concerning the branch which is put up on Christmas Eve with candles, torches and cirios (?)

Note how the Christmas branch must be. i.e. On Christmas Eve, you must look for a large green laurel  branch, and you will pick many red oranges and put them in the branches that come from it specifically as you have seen.  And into each orange you will insert a candle.   And you will hang the aforesaid branch by its rope  on the pole which stands over the lamp on the main altar.  And light the lights: when the mass of the galo starts, and also 20 torches and 40 cirios.  And the candles that you bring (?), and all the relics and plate of the sacristy.

I don’t know any Portugese or Spanish – contributions welcome! – but that gives us some idea of what the sense is.

I also discovered a modern catalogue entry for the manuscript at Berkeley, here.  This contained the interesting information that a partial copy of the manuscript Alc. 64 exists, made in the 19th century, and today filed with other items in a manuscript in the Portugese national library:

It’s manuscript 203, although I believe it is not online, and item 18 within it.

So there we have the backstory.  It’s not a tree, not from 1400, not a precursor of the German invention of the Christmas tree, early in the 16th century – maybe around the same time as cod. Alc. 64 was written – but it is certainly an interesting parallel.