Excellent news today via Matthew R Crawford.  It seems that Cyril of Alexandria’s lost Commentary on Hebrews has been discovered.  It is preserved in three Armenian manuscripts held in the Matenadaran library in Yerevan, the Armenian capital.  An edition has been prepared, and is for sale here at BooksFromArmenia.com, for the modest sum of around $30. 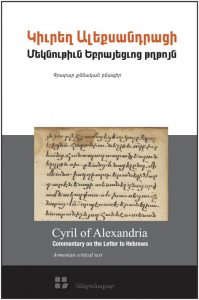 The fragments of the Commentary on Hebrews are listed in the Clavis Patrum Graecorum under CPG 5209 (3).  It’s in vol. 3, page 8.  They were edited by Philip Pusey in an appendix to his edition of the Commentary on John, and also appear in the PG 74, cols. 953-1006.  There are Greek, Latin, Syriac and Armenian fragments.

Last year Joel Elowsky produced a translation of Cyril, entitled “Commentaries on Romans, Corinthians, and Hebrews” through IVP, so he has been unfortunate in his timing.

There is an article: Parvis, “The Commentary on Hebrews and the Contra Theodorum of Cyril of Alexandria”, JTS 26 (1975), 415-9.  From this I learn that Cyril’s commentary is, inevitably, directed against one of his political-religious foes.  In this case it is Theodore of Mopsuestia.  It is referred to by one of his opponents, and so must have been written before autumn 432.  It must have been written after his feud with Nestorius began in 428.

It is always good to recover a text from the night.  Let us hope that someone can produce an English translation of it soon.

The other point that comes to mind is that we need a new and fuller catalogue of the Matenadaran in Yerevan.  What else is there, one might wonder?

UPDATE: I have found another article on the web here, in Russian, by “Priest Maksim Nikulin”.  The English abstract reads:

In the present article the author studies one of the exegetical works of St. Cyril of Alexandria, his Commentary on the Epistle to the Hebrews. This work has been preserved only in fragments contained in catenae, florilegia, and quotations by other authors. The author identifies the texts that have survived to our day and the testimonies of later authors, who confirm that St. Cyril had written a Commentary on Hebrews. The author then provides an overview of the existing publications of this work with an indication of the manuscripts used by scholars of each edition. The author provides the opinions of different scholars about the dating of the work, all of which date it to the anti-Nestorian period of St. Cyril’s life, afer 428 AD. The author comments on the valuable insight by P. M. Parvis, who found in this work a fragment of St. Cyril’s polemics against the Antiochian exegesis and Christology of Teodore of Mopsuestia. The author also considers the hypothesis of P. E. Pusey, who believed that two works of different genres were composed by St. Cyril commenting on Hebrews, as well as the opinions of other scholars about this hypothesis. The author comments on the Armenian fragments of this work studied by J. Lebon. Finally, the author provides a hypothesis about the structure of the work.

I imagine that Dr Nikulin will be excited by the new discovery!