This is the last in our little series of posts of renaissance images of the Baths of Constantine in Rome.  The final group of witnesses are not strictly drawings at all.  They are views taken from maps of Rome produced in this period.[1]  The fashion was for aerial views, which means that monuments had to be depicted.  How accurate these are is another matter.  Nor are they always very easy to access online.

The first possible witness is from the 1493 Nuremberg chronicle, which includes a view of Rome.  I found a viewer for it here.  In the bottom left corner, there are some items of interest. 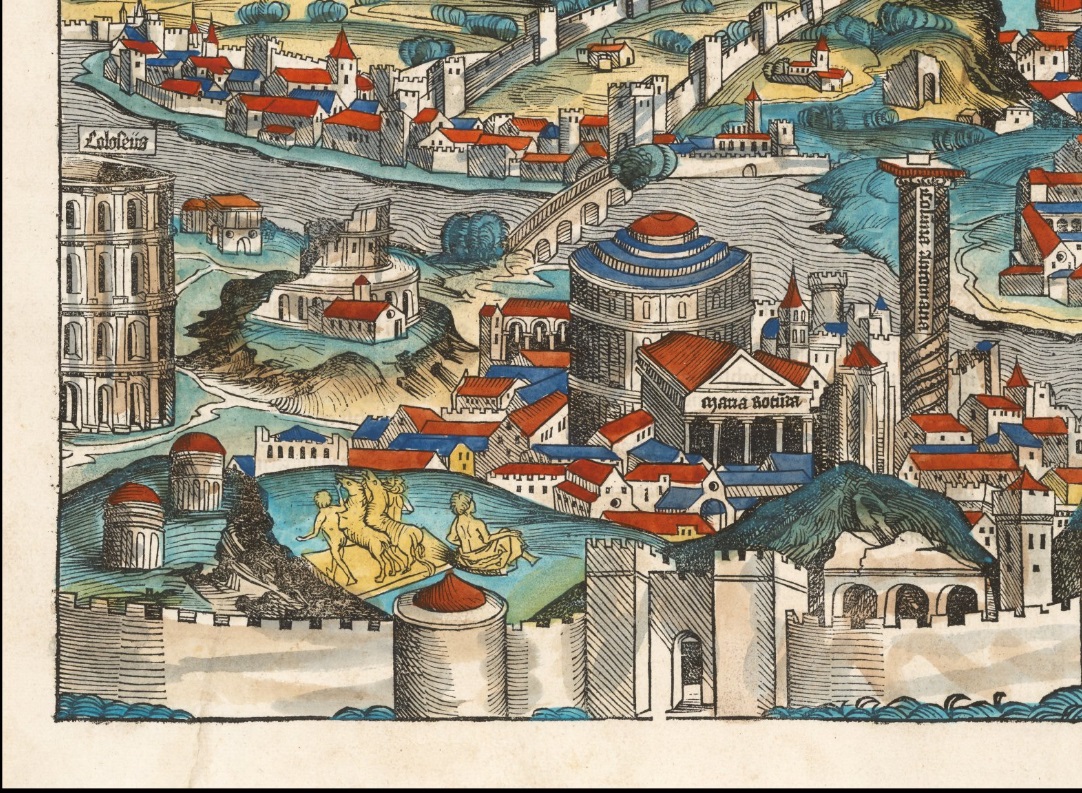 There are a set of statues in yellow, facing left.  These are plainly the horses of the Dioscuri, which stand today in the piazza outside the Quirinal Palace.  To their right is a reclining statue – possibly the Oceanus who was found in the same area.  To the left of these is an area of ruins or rock, and then two domed buildings.  The very well-researched Andrea Pollett website suggests that these rotundas were part of the Baths of Constantine.  But I do not know whether the area of ruins or rock is in fact intended to represent the edge of the Quirinal hill, in which case these are too far toward the Colosseum to be part of the Baths.

Next we have the Duchetti map of 1572, also viewable at BLR Antique Maps, here.

The triangular temple fragment still stands, and the Disocuri, and some kind of structure “Ther. Constantini”.

Also interesting is the Mario Cartaro, Novissimae urbis Romae accuratissima descriptio, an etching of 1576, although I was unable to find this online.  This excerpt from it (from the Andrea Pollett site here) shows the opposite side of the wall in the Peruzzi drawing, as it ran along the street:

Below the “Thermae Constantina” is the raised triangle remains of the Temple of the Sun / Serapis of which I wrote elsewhere.  In the square to the left are perhaps the two statues of the Dioscuri.

But … here is the same view, from a different angle, in another map, Veduta di Roma, also by Mario Cartaro printed in 1579, only three years later (via info.roma.it here): 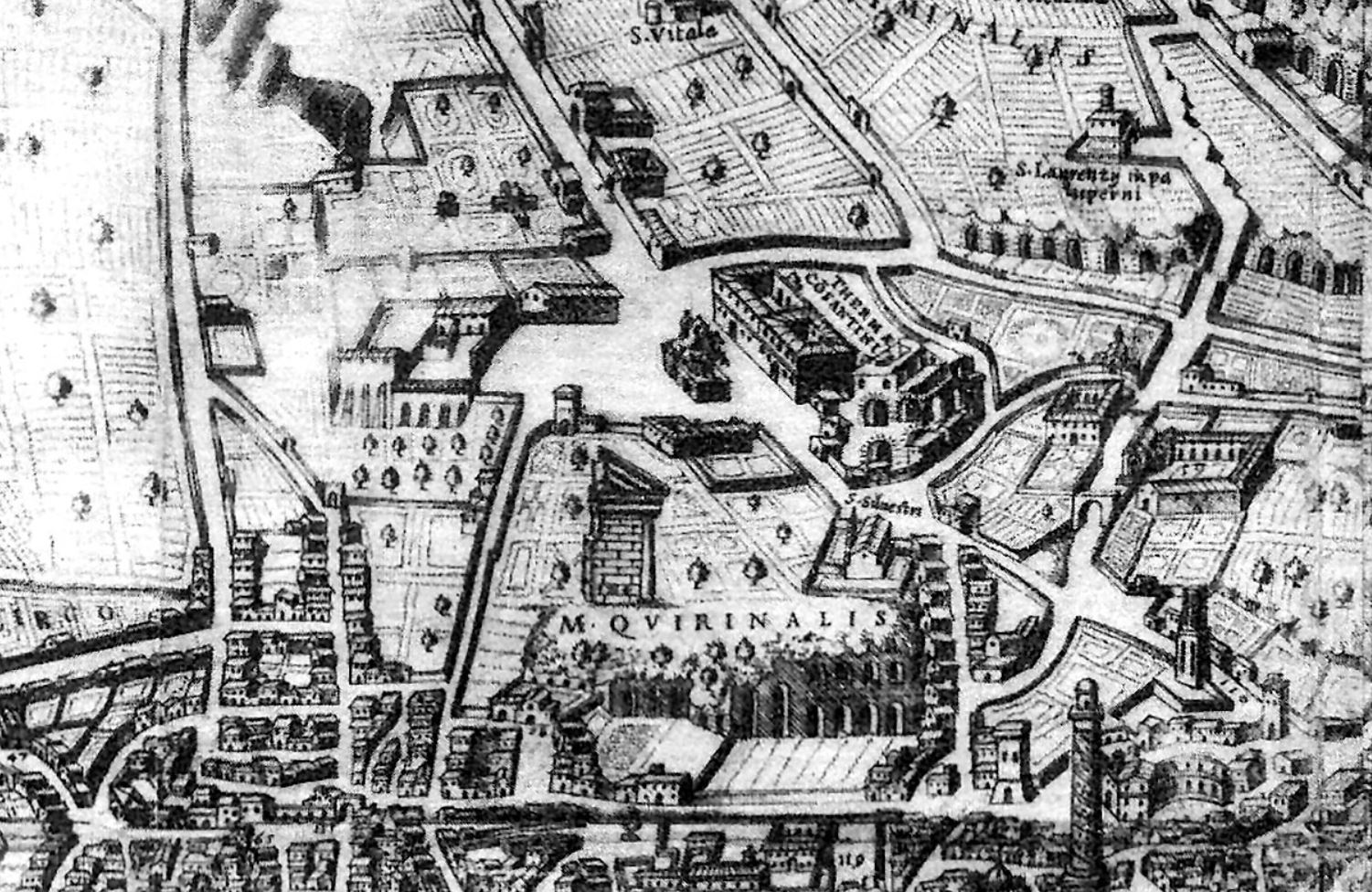 The statues in the Quirinale piazza face a brand new building.  The Baths of Constantine label appears to point to the structure below them, facing the church of S. Silvester.

Next in 1577 is the La pianta di Roma of Du Pérac-Lafréry.  I know my knowledge of this to this Italian site. 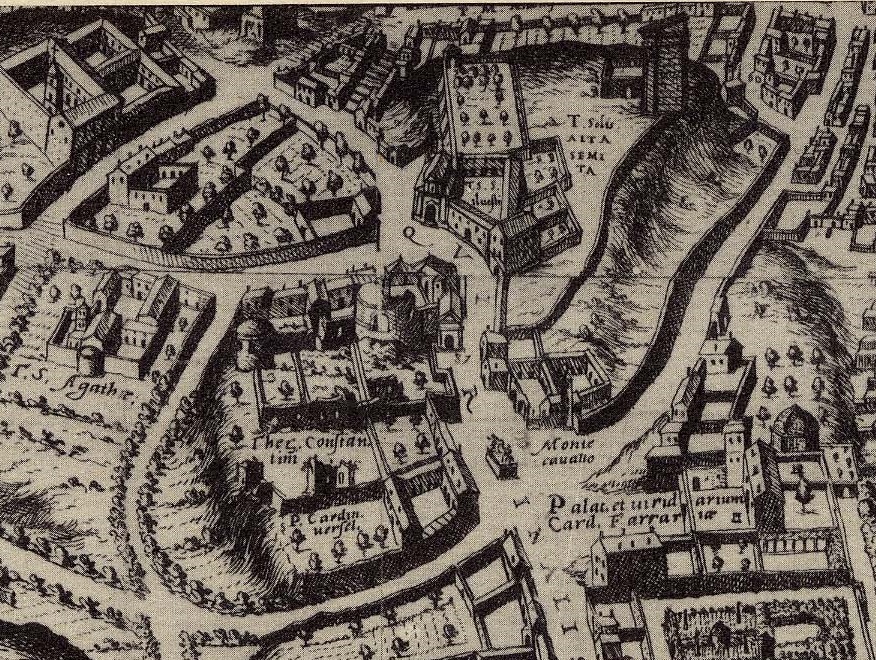 There is a rotunda, a collapsed mass of rubble against it, and above the lettering “Ther. Constan” there is a wall with an exedra.  The Dioscuri stand in the Piazza del Quirinale, here called “Monte Cavallo”, the hill of the horsemen.  The triangular temple is at the top, marked “Templum Solis”, temple of the sun.

And that’s our lot.  For by 1625 the Quirinal Hill looks quite different, in this plate by Giovanni Maggi: 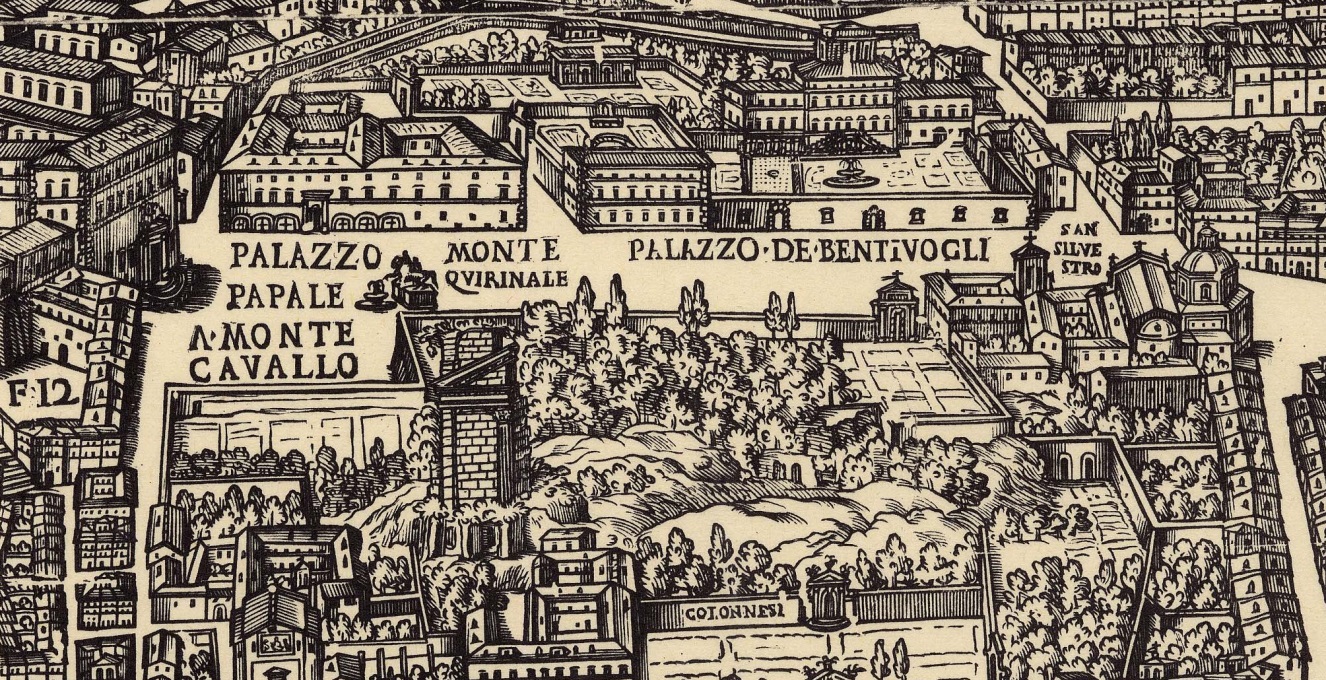 The horsemen still stand on “Monte Cavallo”, now also Monte Quirinale.  The triangular temple is still there, although not for long, and the church of S. Silvester is down the hill.  But opposite stands the new “Palazzo Papale”, the papal palace (today the Presidential Palace), and next to it a massive new “Palazzo de Bentivogli” occupies the whole space where the Baths of Constantine once stood.  They are gone.