When should we take down the Christmas tree?  A google search reveals confusion.  The general idea is that we do so on Twelfth Night, but not when that is.  However it seems pretty clear that it should be on the evening of the 5th January, because 6th January is the festival of Epiphany, when the Three Wise Men are commemorated.  Naturally other customs exist.   I have read that this custom of taking down the tree on Twelfth Night is Victorian,[1] but I was unable to find any source for it.

What is not easily found online is any indication of what custom originates when, where and why.  Instead there is a mass of lazy journalism, repeating hearsay.

Very commonly found is some variant of the following:

In 567 the Council of Tours proclaimed that the entire period between Christmas and Epiphany should be considered part of the celebration, creating what became known as the twelve days of Christmas, or what the English called Christmastide. [2]

The Second Council of Tours (can. xi, xvii) proclaims, in 566 or 567, the sanctity of the “twelve days” from Christmas to Epiphany, and the duty of Advent fast;…

The acts and canons of the second council of Tours may be found online in J. Hardouin, Acta Counciliorum…, volume 3 (1714), column 355, here. 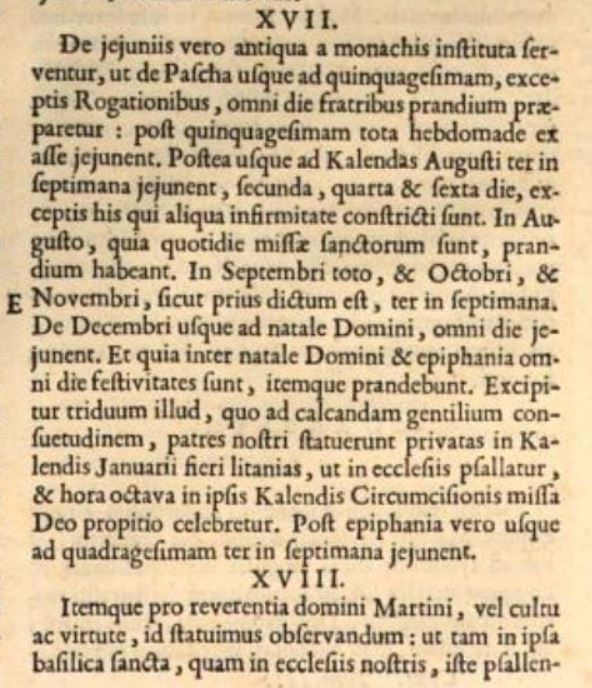 A quick look at the list of the canons reveals that canon 11 has nothing to do with the matter, despite what the Catholic Encyclopedia says.  The title of canon 17 however is as follows:

17.  On the observation of fasts that must be attended to by the monks.

The text of the canon is as follows.  Usefully Hefele’s summary of the canon (found here) is in fact nearly a  literal translation of it, so I will give that.

17. In regard to the fasts of monks the old ordinance shall continue. From Easter to Pentecost (Quinquagesima = Πεντεκοστή), with the exception of the Rogation Days, a prandium (breakfast or luncheon, before the cœna, about midday) shall be prepared daily for the monks. After Pentecost they shall fast for a week, and thenceforward, until the 1st of August, they shall fast three times a week, Monday, Wednesday, and Friday, except the sick. In August there shall be prandium daily, because there are daily Missæ Sanctorum (not de feria). In September, October, and November, again, the fasts must be three times a week, as before; but in December, until Christmas, daily. From Christmas to Epiphany there shall be daily prandium, because every day is a festival. Excepted are only the three days in the beginning of January, in which the fathers, in order to oppose the heathen usages, ordered private litanies. On the 1st of January, the festival of the Circumcision, Mass shall be sung at eight o’clock. From the Epiphany until Lent there must be three fasts in the week.

This is plainly some way short of justifying the more exaggerated claims that we hear.  It’s a regulation of when monks are to fast, rather than a “proclamation” for the people at large.  But it is still very interesting.

My own Christmas tree will be taken down tomorrow on January 5th, during the day before Twelfth Night, the eve of Epiphany.  But I have attempted to discover the basis for the claim that doing so is a Victorian tradition by using a Google Books search.

Certainly the requirement to take down the tree and decorations before January 6th is made very firmly in this 1892 volume, Mary Sherwood, The Art of Entertaining, page 379, although the author confuses Twelfth Night with Epiphany.

The Christmas green was once the home of the peace-loving wood-sprite. Christmas evergreens and red berries make the most effective interior decorations, their delightful fragrance, their splendid colour renders the palace more beautiful, and the humble house attractive. Before Twelfth Night, January 6, they must all be taken down. The festivities of this great day were much celebrated in mediaeval times, and the picture by Rubens, “ The King Drinks,” recalls the splendour of these feasts. It is called Kings’ Day to commemorate the three kings of Orient, who paid their visit to the humble manger, bringing those first Christmas gifts of which we have any account.

The rosemary, the bay, the ivy, the holly, and the mistletoe, the Christmas decorations of hall and cottage, were now pulled down, when according to the popular superstition not a branch, nor even a leaf, should be allowed to remain,… In their place, however, the ‘greener box was upraised,” and Christmas now was positively at an end. Some, indeed, considered this to have been the case on Twelfth Night; and old Tusser, in his “Five Hundred Points of Good Husbandry,” strongly contends for it; but then his head was more full of the cart and plough than of regard for old customs: and, like any other master, he was naturally anxious that the holidays should be ended, and the labourers should get to work again as soon as possible; and certes, merry-making, however agreeable it may be, will not help to dig the land or sow the grain. But in spite of these wise saws, the truth of which nobody would contest, human feelings are stronger than human reason, and customs, when they tend to pleasure, will maintain their ground, till they are superseded—not by privations, but by other forms of amusement. Having therefore tolerated the rites of Candlemas Eve, we may as well put up with those of Candlemas Day.

This Thomas Tusser published his didactic poem, Five Hundred Points of Good Husbandry as long ago as 1557.  In the 1812 edition by William Mavor, on page 270 here, he is talking about “Plough Monday”, the first after Twelfthtide.  The annotator of this reprint notes:

Till after Twelfth-day, very little country business of any kind used to be carried on. Feasting and visiting filled up the period between Christmas and that day, which was always observed with due solemnities. Plough Monday, which speedily followed, was to remind the cultivators of the earth of their proper business; and a spring was given to the activity of domestics, by some peculiar observances. The men and maid servants strove to outvie each other in early rising, on Plough Monday. If the ploughman could get any of the implements of his vocation by the fireside, before the maid could put on her kettle, she forfeited her Shrovetide cock. The evening concluded with a good supper.

This rather suggests that Twelfth day, January 5th, was the last day of the Christmas season even then.  But of course no Christmas tree was known in that day.

I was unable to find anything useful before 1800.  The Google Books search is very poor in many respects.  So the matter must therefore be left open for now.

2 thoughts on “When to take down the Christmas decorations? A canon of the 2nd Council of Tours (567)”