The Roman Martyrology or Martyrologium Romanum is one of the service books of the Roman Catholic church.  It contains a list of martyrs, organised by the date on which they are commemorated, with a short notice of their life and death.  In the daily church service, there is a point at which the martyr or martyrs for the day can be remembered, and the Roman Martyrology supplies the necessary text.[1]

The full title of the work is Martyrologium Romanum ad novam kalendarii rationem et ecclesiasticae historiae veritatem restitutum (Roman Martyrology, by the new reckoning of the calendar, and the truth of church history restored).  This was part of a programme of work on liturgical texts, headed by Cardinal Sirleto.  In 1580 Baronius and others on the commission drew up the list of martyrs to be included.[2]

According to the old Catholic Encyclopedia (here), this first printed edition appeared in 1583 – Romae : ex typographia Dominici Basae; excudebat Franciscus Zannettus, MDLXXXIII. It is dedicated to Pope Gregory XIII.  A second edition appeared, also at Rome in the same year, but I’m not sure how to distinguish it from the first.  One of these is online here.  The title page has only brief details: 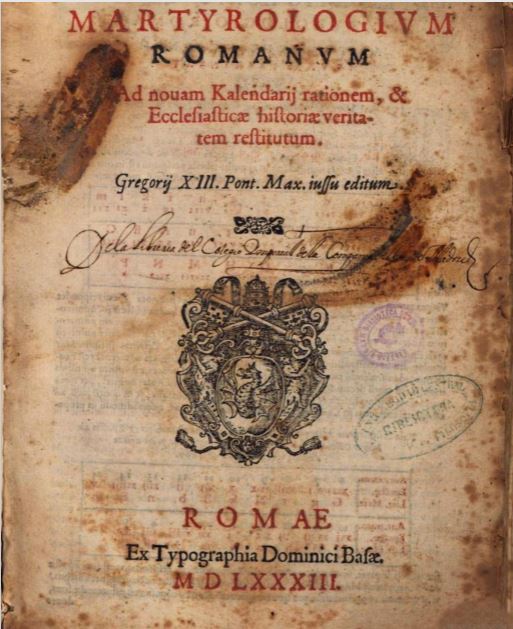 But the colophon at the end gives us a little more, including the date of printing – the 26th May. 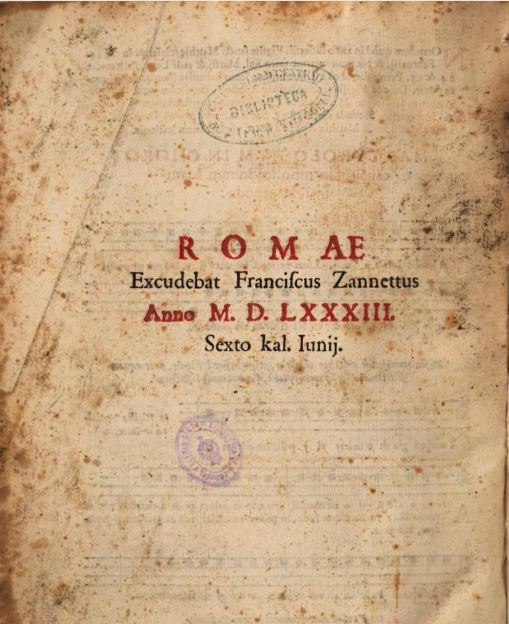 Other editions appeared at Venice and Lyons in the same year.

On 14 January 1584 Pope Gregory XIII issued a breve entitled “Emendato iam kalendario”, ordering the use of the revised edition.

In 1586 a further revised edition appeared, to which Baronius added a Tractatio de Martyrologio Romano.  (Online here), and Baronius himself revised it further in the Antwerp edition of 1589.

Finally in 1748 there appeared the version of Benedict XIV, which remained the standard version until very recently (I couldn’t find this online, but a transcription of the Latin is here).  An English translation of this appeared in the USA at some date.  I was able to find editions from 1869 (online here), 1897 (online here), and 1916 (online here), although I do not know whether these are the same.

The material contained in the Roman Martyrology is derived from many sources, and grew organically over a period of a thousand years, in manuscript.  Much of this period was a time of ignorance and superstition.  The value of the information provided is of very questionable historical value.  Duplicate entries for martyrs abound.  There is a useful but very old article by E.C. Butler, “Achelis on the martyrologies: Die Martyrologien, ihre Geschichte und ihr Wert: untersucht von H. Achelis. 247 pp. (Berlin, 1900.)”, JTS os-2 (1901), 447-458, which summarises work on the text to that date.  More recent overviews must exist, but these are unknown to me.

3 thoughts on “The Roman Martyrology – editions and origins”