We all know the umlaut.  It’s those two dots above the vöwëls in German words.  It also appears in the names of low-grade heavy-metal bands, as a way to seem more Germanic.

But how many of us know that the umlaut is completely fake?

in 1783, G. D. Fuchs issued his Bibliothek der Kirchenversammlungen des vierten und funften Jahrhunderts – Library of Church Councils of the Fourth and Fifth Centuries – in multiple volumes at Leipzig.  Being German, he printed it in a “Fraktur” typeface – that horrible, unreadable Germanic “gothic” typeface.

But modern technology is wonderful, and I’ve been scanning some of it and creating an electronic text.  And I noticed something… 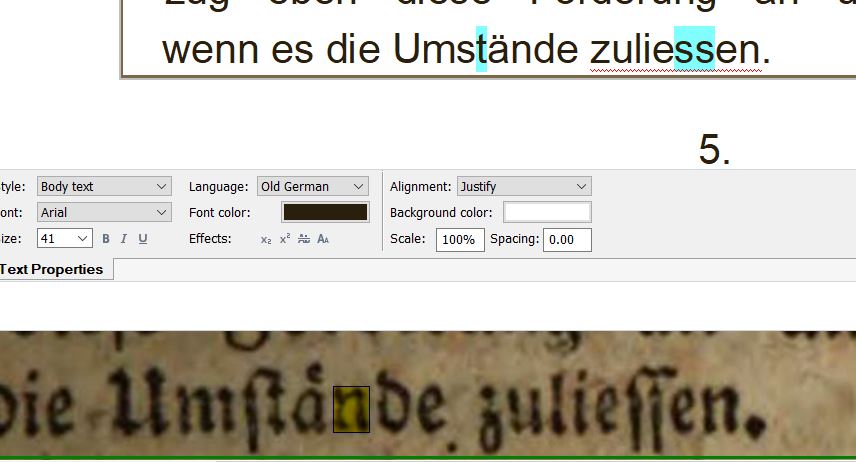 At the top is what the OCR software makes of the text.  At the bottom is the image being scanned.

But notice the “Umstände”.  In Fuchs text, the modern umlaut is actually printed as a tiny little letter “e”!!

I’m sure we all remember the fat Nazi Reichsmarshal from numerous war films.  In German, of course, he is “Göring”, with his umlaut correctly in place.  In English we say “Goering”.  It turns out that we are right.  That umlaut, the funny looking vowel with a funny-looking mark, is just fake.  His name really was Goering, and the Germans just wrote it in a funny way that just looked more Germanic on the page.

Longer ago, the German language in German books were rather less, um, Germanic.  I’ve noticed in the past that the spellings in Austrian books in the 1890s are less Germanic than in those produced in the Reich in the same period.  Cologne is not spelled with a K until recent times.  I get the impression that the Germans during the 18-19th centuries must have gone off on a weird tangent.  Probably it’s nationalism or something, but it doesn’t half make their books hard to read.

Thankfully they don’t use Fraktur any more.  I am told that in 1941, in a blow for sanity, Adolf Hitler banned the use of it.   Yes, you read that correctly – we don’t use the words “sane” and “Hitler” in the same sentence that often.  It’s a sign of how mad things had got, that Hitler was the voice of reason.  Today I believe that the modern German governments have been trying to simplify, getting rid of the double-s, and things like that.  It must be welcome.

But all the same… how about all those umlauts really being just an abbreviated lower-case letter “e”?  I bet bands like Moeterhead and Doekken would have been really annoyed.

13 thoughts on “Let’s kill all the umlauts!”