In 376 AD the 17 year old emperor Gratian left his base in Gaul and – probably – made a visit to Rome.  This was ten years after his father, Valentinian I, proclaimed Gratian as co-Augustus on 24 August, and a year after the unexpected death of Valentinian.  It is possible that the visit was to celebrate his decennalia, although no source records this.  In the same year the first Christian, Gracchus, was appointed to the office of prefect of Rome.

While he was there – probably -, a curious scene allegedly took place:

The Romans … called those who held their highest rank of priesthood pontifices, and legislated that kings should be numbered among them because of their important rank. (3) All the kings after Numa Pompilius (who was the first to do so) and all the Roman emperors from Octavian have held this office; as soon as each assumed supreme power, the priestly robes were brought to him by the pontifices and he was styled pontifex maximus (chief priest). (4) All the earlier emperors seem to have been very pleased to accept the honour and to use this title, even Constantine (who, when he came to the throne, was perverted religiously and embraced the Christian faith) and all his successors, including Valentinian and Valens. (5) When, however, the pontifices as usual brought the robes to Gratian, he rejected their offer, considering it impious for a Christian to wear such a thing. When the robe was given back to the priests, their leader is reputed to have said: ‘If the emperor does not want to be called pontifex, there will soon be a pontifex, Maximus’.

The quotation just given is from Zosimus, New History IV, c.36.  The translation is by Ronald T. Ridley from 1982 (although in the last sentence I have changed “pontifex maximus” to “pontifex,  Maximus” – Gratian was overthrown by the pagan usurper, Magnus Maximus). It is the only source for this event.

The passage has raised suspicions.  Zosimus writes in the 6th century, almost 200 years later.  Unfortunately his work is unreliable, even though he has excellent sources.  But he felt able to reshape events, to alter them in order to fit his narrative.  What he believes is that Rome fell because it abandoned paganism, and the facts are secondary.  So we can’t quite be sure that he is giving a real historical event.

Likewise Zosimus does not say that this event took place at Rome.  It seems likely that it did, because the priesthood of Rome was ancient and focused on Rome when it was just a city state.  It would be strange for the Roman priesthood to stage this presentation away from Rome itself.

The sparse accounts of the time rather suggest that Gratian, who was very young, remained in Gaul for the first two years of his reign.  This again tends to throw doubt upon the narrative.

However there is, actually, a not-very-good source which does state that Gratian visited Rome.  The source is not early, but one of those odd Byzantine texts which mash together very brief (but tantalising!) bits of information from all sorts of sources.  It is known as the παραστασεις συντομοι χρονικαι, or Parastaseis syntomoi Chronikai; or in Latin as the Breves ennarrationes chronicae.  This was apparently put together in Constantinople in the 8th century.

The text of this Parastaseis may be found in the old Bonn Corpus Scriptorum Historiae Byzantinae series in 1843 by B. G. Niebuhr, in the volume “Georgius Codinus” – the volume number is not printed in the book and online sources seem confused -, pp.166-193.  It is online here, on p.178.  The Latin translation given beneath the Greek text is a renaissance version by F. Combefis.  The work was edited again by T. Preger in the Scriptores originum Constantinopolitarum, vol. 1 (1901), p.19-73 (online here).  He added chapter divisions, which makes this chapter 50. 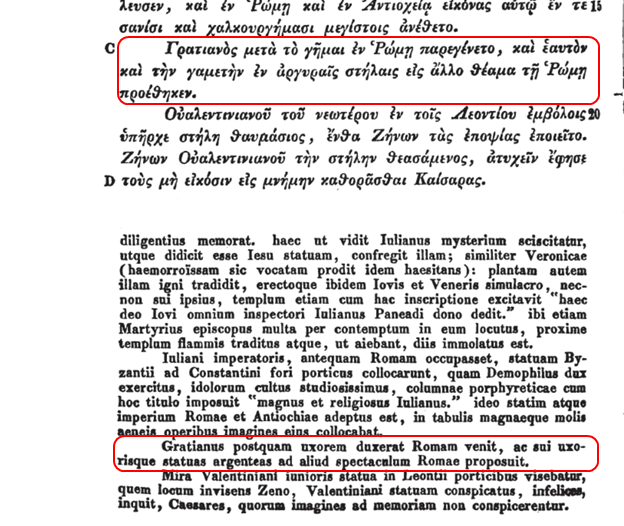 As we see, the statement made is very brief.  It forms part of a discussion of imperial statues:

Gratian, after he married, came to Rome and set up silver stelae to himself and his wife as a new spectacle at Rome.

Well, this seems quite clear, on the face of it.  Indeed it is discussed by the excellent T. D. Barnes, who assigns Gratian’s visit to the year 376.[1] But others have raised difficulties.  Some suggest that the visit in the Parastaseis is just speculation by the author to account for the erection of the silver stelae,[2] and some suggest that the account of Zosimus itself is fiction, and indeed such no priestly robe ever really existed, even if John the Lydian also refers to it.[3]  These objections, however carefully argued, do seem to rely more on speculation, than on any particular piece of data.

By the time of Gratian, Christianity had been legal for more than half a century.  Julian the Apostate failed when he attempted to restore paganism.  Nobody really remembered how to do the sacrifices properly, indeed, as Julian himself complains; and he was even jeered by the people.  Paganism was a husk by the time of Gratian.  Later his government initiated strong measures against it.  It was in his time that the altar of Victory was removed from the senate-house, a highly symbolic gesture which must have shocked many.

But it seems that earlier Christian emperors had retained the title.  We have definite evidence is that Constantine, Valentinian, Valens and Gratian all held the office of Pontifex Maximus.  For Constantine we have coins (I am told, but have been unable to verify: RIC 7.185, 352), and there is an inscription for the last three (ILS 771 – here), commemorating the erection of a bridge in Rome in 369 AD.  The inscription is on the bridge, today known as that of St Bartholomew, connecting the Tiber island with the right bank of the Tiber.  (At this time Gratian is just a child.)

But this is the last such inscription.  There is no inscription with the title of “Pontifex Maximus” for any emperor later than Gratian.

In part this may be because, simply, we have many fewer inscriptions from the troubled years ahead of the Roman collapse.  But we can only make statements based on the data we have, for any period of history.  That data tells us that a change takes place in the reign of Gratian.  The title “Pontifex Maximus” is abandoned.  This is consistent with the measures that Gratian takes later in his reign, explicitly enacting strong anti-pagan measures, and paving the way for a complete ban under his successor, Theodosius I.

Postscript: I find that there are in fact a number of inscriptions in which Constantine is described as “Pontifex Maximus”, such as this one:

15 thoughts on “When did Roman emperors cease to use the title of “Pontifex Maximus”?”