After the Roman collapse in Britain, our sources for history become very scanty.  In Cornwall in particular we are almost entirely dependent on interpreting scraps in medieval saints’ lives – often written centuries later than the events – or making deductions from place names.

The pioneer in this area was Canon Gilbert H. Doble (1880-1945), who wrote and published a series of very attractive illustrated booklets from the 1920s until the Second World War.  Today these booklets are hard to access.  Indeed the Diocese of Truro in the 1960s felt obliged to produce a book-form edition in six volumes to satisfy demand.  This is still being reprinted today, by Llanerch Press, and I have access to it in various ways.  But I have always wondered whether the editor reproduced the original accurately or not.

Today I was able to visit Cambridge, and after purchasing a reader’s card for the university library, I made my way to the shelves where Doble’s work could be seen.

My first impression was shock.  There were considerably more volumes than I had expected:

All this material is out of copyright, hard to access, and it ought to be online.  I had naively thought to copy whatever I could, with this in mind.  But that mass of small volumes made it clear that this was not going to be possible.

In fact I was only able to copy the booklet on “Saint Mewan and Saint Austol”, itself more than 40 pages long.  I already had the Truro reprint; and I had a PDF of the first edition of it, which I had found on a French site.  But this was the second edition, published in 1939.  You can find it online here.

Likewise I found that the second edition contained a mass of additional historical information by Charles Henderson, which the Truro editor had omitted.  But this material was useful, and consequently its omission makes the Truro volumes far less useful.

The Truro edition also reorganised the material geographically.  But Doble himself did not do this.  The first booklet was that for Saint Mawes, near Falmouth, and it contains something of an introduction to the whole series.  This I had never seen, as it was buried in the mass of other material: 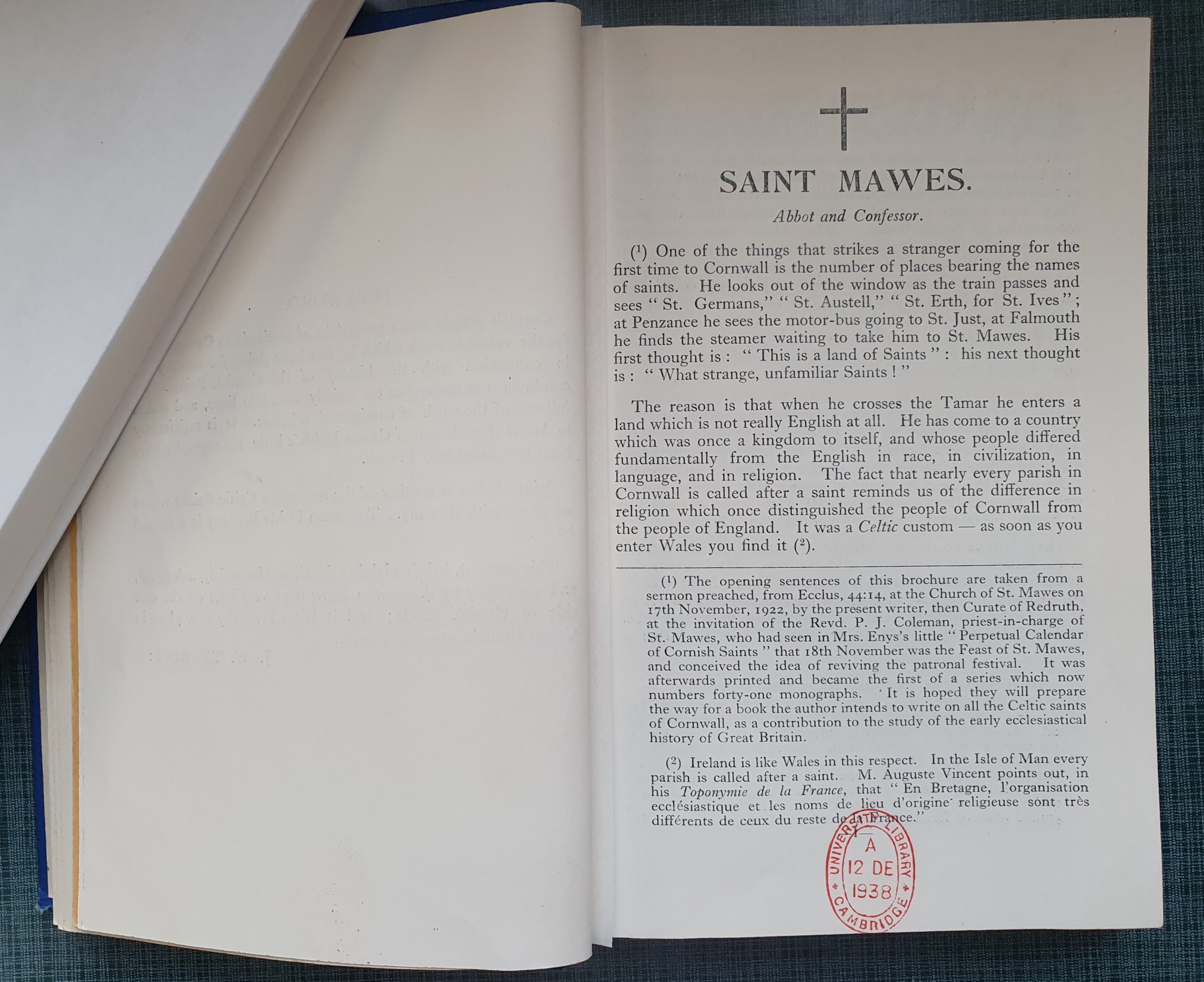 One of the things that strikes a stranger coming for the first time to Cornwall is the number of places bearing the names of saints. He looks out of the window as the train passes and sees “St. Germans,” “St. Austell,” “St. Erth, for St. Ives”; at Penzance he sees the motor-bus going to St. Just, at Falmouth he finds the steamer waiting to take him to St. Mawes. His first thought is: “This is a land of Saints” : his next thought is: “What strange, unfamiliar Saints!”

The reason is that when he crosses the Tamar he enters a land which is not really English at all. He has come to a country which was once a kingdom to itself, and whose people differed fundamentally from the English in race, in civilization, in language, and in religion. The fact that nearly every parish in Cornwall is called after a saint reminds us of the difference in religion which once distinguished the people of Cornwall from the people of England. It was a Celtic custom — as soon as you enter Wales you find it.

There is still a train from London to Penzance, but these days the traveller will use his motorcar, and travel down the M5 into the West Country, and then, from Exeter, the A30 over the moors.  But he will still have the same experience.  It can be a bit of a shock.

A week ago, I returned from a trip to Cornwall.  When I returned, as I crossed into Devon, I was struck by the immediate change in place-names on the road signs.  The alien Cornish names vanished, and every name was English, of the sort that might be found anywhere in the south of England.  The place names tell you at once that Devon is part of England.  But they scream at you that Cornwall is not.  Another tongue underlies the thinly-anglicised words.