Now that we have located the missing Welsh hamlet of Llan Awst using the tithe map of 1844 – about which more in a moment -, it’s time to give some more information about the area.

On the Royal Commission for Ancient and Historical Monuments of Wales (RCAHMW) website, the tithe maps are also linked to Welsh newspaper articles.  These also record the existence of Llanawst.  I have found a couple of articles, but there might very well be more.

The first of these is from the Monmouthshire Merlin, 12th October 1850, where an advertisement on page two reads:

The second article is from a Welsh-language newspaper, Ystorfa weinidogaethol, (Cyf. IV Rhif. 35 Ionawr 1841) (Permalink here) and on p.24 out of 32 records the activities of a charitable organisation, the “True Ivors”, establishing “lodges” (i.e. branches, like masonic lodges) in various places, including Risca, Llanawst and Machen. 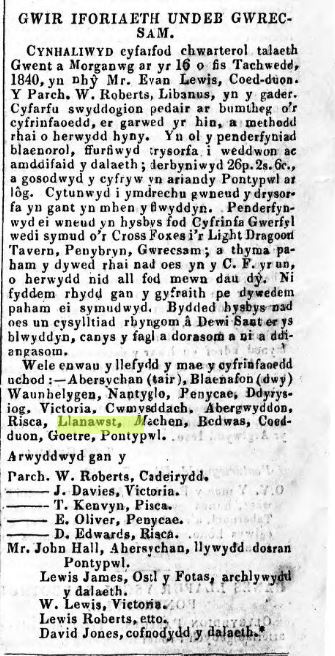 In my last post, I mentioned that we owe a great debt of thanks to Mr Wayne Barnett, the Rector’s Churchwarden at Lower Machen.  He asked his Welsh-speaking neighbour, Mr Iwan Brooks-Jones, to read this article for us, who replied:

It appears to be a report of the Gwent and Glamorgan branch of the Gwir Iforiaid (True Ivors) philanthropic society meeting held in Blackwood in 1840.

It was attended by officials from 19 lodges. A fund had been formed for widows and orphans in the region and they hoped to reach 100 by the end of the year (but not clear 100 what!).

He also found a source on just who the “True Ivorites” were, which is here.

But what are these “tithe maps”?  They are the product of a very long historical process in England and Wales, which only ended in 1977, and the maps emerge from an Act of Parliament in 1836.

In England and Wales during the medieval period and after, one-tenth (10%) of the agricultural produce of the land in a parish was due as “tithe” to support the parish church and the parish clergyman.  (I ignore the question of “Great Tithes” and “Lesser Tithes”).  This system was inevitably unpopular with the farmers, although we may wonder what they would make of the efficient manner in which the modern state takes 50%.  We learn from Paupers and Pig Killers: the Diary of William Holland, A Somerset Parson (1799-1818), that the parson had to be sharp in order to get his tithe in full, and even so that he might hesitate to press a powerful landowner too much for it.

But by 1800 change was under way.  It was an utter nuisance to everyone to pass around bushels of corn and so forth, and so agreements were made to pay cash instead.  While the Rev. William Holland was still receiving payment in kind, in Norfolk his contemporary James Woodforde records cash payments in his The Diary of a Country Parson (1758-1802), at his annual “Tithe Audit Dinner”, taking place shortly before Christmas.  The farmers would assemble, with their money, and the parson would give them a dinner with plenty of strong beer.  The poet William Cowper records how these could be sour affairs.  The farmers hated paying over their money.  By contrast the tithe audit dinners of Parson Woodforde became increasingly genial and pleasant affairs as the parson grew older, and prices rose.  The Napoleonic Wars led to huge inflation, which the old parson did not understand.  When he died, leaving a very modest sum, his successor immediately doubled the tithe.  Parson Woodforde knew that the farmers cared only about money, and their geniality demonstrated that they knew that they were robbing the old man of his due.

In 1836 parliament passed an Act to change all of the tithes to a money payment.  This meant that surveys had to be commissioned of areas where payment in kind still applied, with maps of where the fields were, and who owned them, and what the tithe payment should be.  But this was in the interests of the farmers, and so it proceeded rapidly.  The tithe maps for Wales are the output of this process.

It should be added that tithes continued to exist in England and Wales until 1936, when a cash payment was made to the church by the government to commute all the tithes once and for all.  By this time they were deeply unpopular, and the use of bailiffs to collect the tithe created deep hatred in areas like East Anglia.  In 1933 the British Union of Fascists succeeded in gaining public support by sending groups of blackshirts to farms in order to defend the farmers against the bailiffs!  This probably hastened the end of the system.  Even so there were administrative matters concerning the tithe fund, which continued as late as 1977.

But the existence of the tithe maps is the one pleasant outcome, that has outlasted all the centuries of financial exactions.

Churchwarden Wayne Barnett also drew my attention to a couple of other important points.

The first is something very  likely to confuse readers looking at a modern map.  On a modern map, there is the town of Machen; and the village of Lower Machen.  But in Borrow’s time, in 1854, the name “Machen” referred to what is today called Lower Machen.  By 1900 a town of “Upper Machen” had come into existence through industry, and today it dwarfs the original village.  He writes:

There has been a place of worship at Lower Machen since the 6th century but we only have knowledge of records from 1102. As an aside, you may like to look at https://lowermachen.church/heritage/ … However, Lower Machen Church does have a small group of volunteers working on the historic significance of the village – you may have noticed on our website there are a couple of books that may interest you. Sorry for the commercial plug but they are hot off the press last Friday with all proceeds going to our charity work, the Parish Trust.  https://lowermachen.church/books/

He kindly sent me a PDF of one of the books, on the Morgan family chapel, which is excellent. I am happy to promote the books!

Living locally he was also able to comment on Borrow’s route:

He seems to be following the river Rhymney past Bedwas (colliery) and hitting Llanawst before Machen (written in that order). In 1854 UPPER Machen would have developed through industry and there was certainly at least one mine (behind my house) and very close to the river.

If only we knew which Machen he refers to – I assume it is Lower Machen as the Traeth (on the Draethen road) must be the large flat fertile area referred to and he seems to have crossed to that side of the river after Bedwas.

The other point is whether there is anything ancient and monastic to be seen.  The “Llan” in Llanawst ought to indicate a monastic site.  But nothing is known now. William Graham mentioned that there is a demolished church at Llanvedw next to Ruperra – too far away –  and that some maps note the supposed site of a priory in Park Wood.  But this has no known history.

Here’s the ordinance survey map of the area.  I have highlighted Llan Awst, the priory site, and the scale.

Wayne Barnett sent me two pages from Antony Pickford, Between Mountain and Marsh (1947) ch. 5, pp.56-7.  The author is discussing the Benedictine priory of Bassaleg, and mentions ruins in Park Wood:

Now the most interesting question is that of the location of the monastic buildings and unfortunately it is just the one we cannot answer. Let Coxe speak again. “ No remains of the ancient Priory exist at Bassaleg; there is however a ruined building at a distance of about a mile in the midst of a deep sequestered Forest not far from the Rumney, not far from the con­fines of Machen Parish, which is supposed by some to have been part of the Monastery. The name of this Forest, still called Coed y Monachty, seems to confirm the opinion.”

I presume it is on the strength of this that the six inch Ordnance Map confidently marks “Site of Priory” at a spot half way down the Machen side of the brook in the middle of Park Wood.

There is undoubtedly a ruin there; within living memory some of the foundations were knee high. Now one will probably walk over the site a dozen times and not notice the cut stone wall bases scarcely showing above the earth. Short of thorough excavation we shall never know any more about this building.

Was it the Priory? It seems very doubtful. The building could have been a single cell of earlier or later date; the wood could have been called Coed y Monachty, simply because it belonged to the monks; the whole thing may have been invented at a much later date by some person who found the old ruins hidden in the wood and decided that they had once been the Priory. Even as a form of mortification of the flesh it is very difficult to see how worship could have been carried on satisfactorily in church on the banks of the Ebbw by monks who dwelt two and a half miles away on the banks of the Rhymni! In fact it is an impossible supposition. The Priory must have been close beside whatever building then served as a church. Owing to the early dissolution of the House there has been ample time for all trace of foundations to disappear.

We may say that the Priory was somewhere near the present church site and that short of complete excavation it is impossible to reach any conclusion about the building in Park Wood.

Of the doings of the Benedictine monks of Bassaleg we are fortunate enough to possess a little evidence….

Whether the ruin in Park Wood has any connection with Llanawst, except geographical closeness, we do not know.

It’s time to wrap up this series of posts, and return to where we started: the statement of Canon G. H. Doble, in his Saint Mewan and Saint Austell, that a place named Llanawystl existed in Wales, which might be connected to St Austell in Cornwall.

I think we can happily conclude that the lost and now found hamlet of Llan Awst in Monmouthshire has no connection at all to St Austell in Cornwall.  The Welsh literary sources atttribute it to a female saint named Hawystl, the daughter of a sub-Roman / early Welsh kinglet named Byrchan.  Since both names derive from Latin, Augustus -> Awst, and Augustulus -> Awstl, we really do not need to suppose any direction connection.

2 thoughts on “More on Llan Awst”