Christmas first appears in the historical record in 336, in Rome.  But there is no trace of anybody having a “Christmas tree” until 1521, when a record of trees being cut for this purpose appears in a town register in Séléstat in Alsace.  The tree was decorated with red apples and unconsecrated communion wafers.  When a frost killed off the apples, these were replaced with glass imitations, the origin of our baubles.  Previously Catholics had had a nativity scene, but these were considered superstitious by the Reformers.  However this objection did not apply to the Christmas tree, which therefore spread throughout Germany.  The custom was brought to England in the 1840s by Prince Albert, adopted by the aristocracy, and from there spread to America and the world.  All this is fairly well-known to anyone who has investigated at all.

But there is a curious legend in circulation which is as follows:

One of the earliest stories relating to the Christmas tree, the eighth-century Catholic missionary, Saint Boniface, is said to have cut down an oak tree sacred to the pagan god Thor. An evergreen fir tree grew in its place, which he said symbolised the everlasting nature of Jesus.  (See on Twitter here)

This story is to be found all over the web, mainly in Catholic websites such as this or this, composed by Fr. William P. Saunders.  Indeed the exact words of Boniface, usually slightly abbreviated, are quoted again and again:

This little tree, a young child of the forest, shall be your holy tree tonight. It is the wood of peace… It is the sign of an endless life, for its leaves are ever green. See how it points upward to heaven.

What do we make of this?

Well, it is certainly the case that St Boniface destroyed a mighty oak that was dedicated to horrible old Thor.  This is recorded in the Life of St Boniface by Willibrand.  Unusually there is a useful Wikipedia page on the destruction of the oak here.  A complete translation of this text was made in 1916 by George W. Robinson, and this may be found at Hathi here.  The Latin was published in the MGH series as “Vitae Sancti Bonifatii archiepiscopi Moguntini” and is here.

…others indeed, not yet strengthened in soul, refused to accept in their entirety the lessons of the inviolate faith. Moreover some were wont secretly, some openly to sacrifice to trees and springs; some in secret, others openly practised inspections of victims and divinations, legerdemain and incantations; some turned their attention to auguries and auspices and various sacrificial rites; while others, with sounder minds, abandoned all the profanations of heathenism, and committed none of these things. With the advice and counsel of these last, the saint attempted, in the place called Gaesmere, while the servants of God stood by his side, to fell a certain oak of extraordinary’ size, which is called, by an old name of the pagans, the Oak of Jupiter. And when in the strength of his steadfast heart he had cut the lower notch, there was present a great multitude of pagans, who in their souls were most earnestly cursing the enemy of their gods. But when the fore side of the tree was notched only a little, suddenly the oak’s vast bulk, driven by a divine blast from above, crashed to the ground, shivering its crown of branches as it fell; and, as if by the gracious dispensation of the Most High, it was also burst into four parts, and four trunks of huge size, equal in length, were seen, unwrought by the brethren who stood by. At this sight the pagans who before had cursed now, on the contrary, believed, and blessed the Lord, and put away their former reviling. Then moreover the most holy bishop, after taking counsel with the brethren, built from the timber of the tree a wooden oratory, and dedicated it in honor of Saint Peter the apostle.

When by the favor of God’s will all that we have told was fulfilled and accomplished, the saint went on to Thuringia. And he addressed the elders of the…

There is no mention of the Christmas tree.

A brief search of Google books leads back to 1905 through a trail of quotations, where the name varies slightly: Wilfrid, Winfrid, Winfried are all attested.  But curiously it does not give the original, which I found indirectly.

The words of Boniface above in fact originate in a short story: Henry van Dyke, “The Oak of Geismar”, published in Scribner’s Magazine, vol. 10, July-December (1891), p.681-7, with an illustration by Howard Pyle.  The volumes of Scribner’s Magazine can be found here, and the right volume is here.

Here is the relevant section (p.686).  A child is about to be killed with an axe as a sacrifice to Thor at the oak.  Boniface intervenes.

“Hearken, ye sons of the forest! No blood shall flow this night save that which pity has drawn from a mother’s breast. For this is the birth-night of the white Christ, the son of the All-Father, the Saviour of mankind. Fairer is he than Baldur the Beautiful, greater than Odin the Wine, kinder than Freya the Good. Since he has come sacrifice is ended. The dark Thor, on whom ye have vainly called, is dead. Deep in the shades of Niffelheim he is lost forever. And now on this Christ-night ye shall begin to live. This Blood-tree shall darken your land no more. In the name of the Lord I will destroy it.”

He grasped the broad axe from the hand of Gregor, and striding to the oak began to hew against it. Then the sole wonder in Winfrid’s life came to pass. For, as the bright blade circled above his head, and the flakes of wood flew from the deepening gash in the body of the tree, a whirling wind passed over the forest. It gripped the oak from its foundations. Backward it fell like a tower, groaning as it split asunder in four pieces. But just behind it, and unharmed by the ruin, stood a young fir-tree. pointing a green spire toward the stars.

Winfrid let the axe drop, and turned to speak to the people.

“This little tree a young child of the forest, shall be your holy tree to-night. It is the wood of peace, for your houses are built of the fir. It is the sign of an endless life, for its leaves are ever green. See how it points upward to heaven. Let this be called the tree of the Christ-child ; gather about it, not in the wild wood, but in your own homes; there it will shelter no deeds of blood, but loving gifts and rites of kindness.”

So they took the fir-tree from its place, and carried it in joyful procession to the edge of the glade, and laid it on one of the sledges. The horse tossed his head and drew bravely at his load, as if the new burden had lightened it When they came to the village, Alvold bade them open the doors of his great hall and set the tree in the midst of it. They kindled lights among its branches, till it seemed to be tangled full of stars. The children encircled it wondering, and the sweet smell of the balsam filled the house.

Then Winfrid stood up on the dais at the end of the hall, with the old priest sitting at his feet near by, and told the story of Bethlehem, of the babe in the manger, of the shepherds on the hillside, of the host of angels and their strange music… 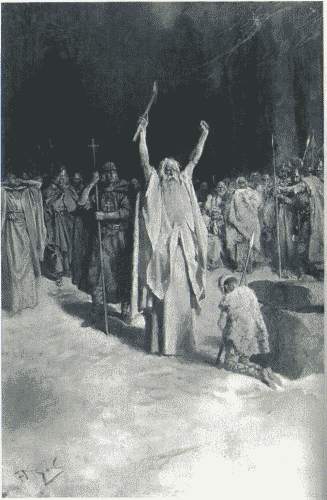 The story was a success and the publisher reissued it in book-form in an enlarged version as The First Christmas Tree: A Story of the Forest (1897), with additional illustrations. It is available at Gutenberg here.  But interestingly this form of the story does not seem to have influenced the transmission of the modern legend, for the words of Boniface are always given in the form taken from the magazine.  Here is the expanded text:

“And here,” said he, as his eyes fell on a young fir-tree, standing straight and green, with its top pointing towards the stars, amid the divided ruins of the fallen oak, “here is the living tree, with no stain of blood upon it, that shall be the sign of your new worship. See how it points to the sky. Let us call it the tree of the Christ-child. Take it up and carry it to the chieftain’s hall. You shall go no more into the shadows of the forest to keep your feasts with secret rites of shame.  You shall keep them at home, with laughter and song and rites of love. The thunder-oak has fallen, and I think the day is coming when there shall not be a home in all Germany where the children are not gathered around the green fir-tree to rejoice in the birth-night of Christ.”

An abbreviated version of the magazine story appears in a school book, William F. Webster and Alice Woodworth Cooley, Language, Grammar and Composition, (1905), p.52.  No doubt this spread the legend further.

Modern novelisations seem to be a fertile source of false quotations, as is perhaps inevitable.  This is, then, another example.

11 thoughts on “A modern myth: St Boniface and the Christmas Tree”