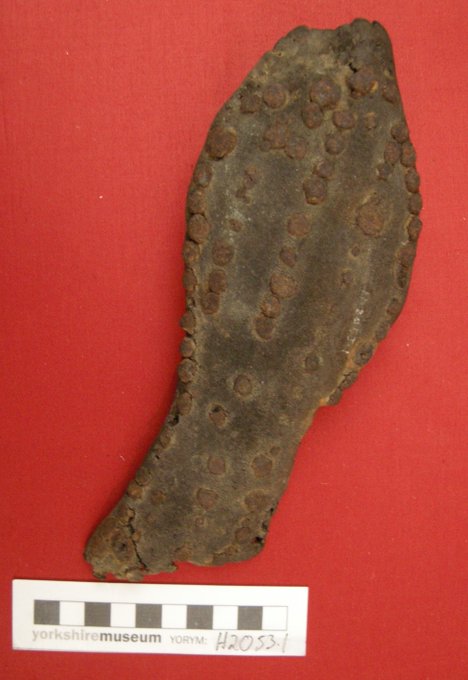 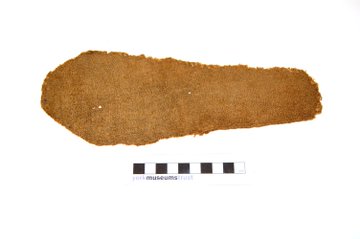 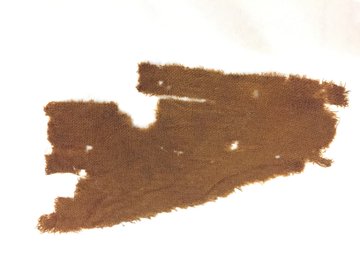 For more information I was referred to R. C. Turner, M. Rhodes and J. P. Wild, “The Roman Body Found on Grewelthorpe Moor in 1850: A Reappraisal”, Britannia 22 (1991) pp. 191-201. (JSTOR)  From this I learn that the shoe is indeed Roman, although it could belong to any period during the Roman occupation.  The second item is a woolen insole, intended to pad the shoe which was old and had been repaired before its loss.

The body was found in 1850 by two brothers, Edwin and John Grainge, of Castiles Farm, Kirkby Malzeard, whilst digging for peat. No exactly contemporary accounts of the discovery are known; the two local newspapers were not founded until around 1855. Our knowledge of the find is based on two somewhat later descriptions.

He then mentions “T. Heslington, On Roman Camps in the Neighbourhood of Ripon, Ripon: Johnson and co (1867)”, but had no access to this and seem to have doubted that it existed.  We who live in the age of the internet can quickly discover a number of copies accessible in UK libraries, including at least one copy in the library at York Minster!  Turner was forced to rely on a quotation, which is as follows:

A few years ago some workmen digging for peat on a farm, on the moors near Kirkby Malzeard, made one of the most extraordinary discoveries, of its nature, ever disclosed.  This was the body of a man – evidently an ancient Roman – which the peat had tanned, dried and preserved in a remarkable manner, like (as the people say who saw it) an Egyptian Mummy. The robes were quite perfect and the material tough – having been tanned and preserved by some natural agency. The toga was of a green colour, and some of the dress of scarlet material; the stockings of a yellow cloth, and the sandals cut out in a beautiful shape – like those found in the Thames some years ago – and were likewise finely stitched. Unfortunately this marvellously preserved relic of the peat was nearly destroyed before the Kirkby Malzeard policeman arrived, but he managed to secure the stockings and sandals – perhaps the only mementoes now remaining of this strange discovery.

The other source is an account by W. Grainge – possibly related to the finders? – in the Ripon Millenary, part 2 (1892), preface, p.ix.  This is online here, but is brief:

The most remarkable discovery connected with this period was made in the spring of 1850, by Edwin and John Grainge, while digging peat on Grewelthorpe Moor, when they came upon the body of a man, in an almost complete state of preservation, and from his dress evidently a Roman, which the peat had tanned and dried, in a remarkable manner, somewhat like an Egyptian mummy. The robes were quite perfect when found, the toga of a green colour, while some portions of the dress were of a scarlet hue; the stockings were of yellow cloth, and the sandals of a finely artistic shape, one of which was preserved, and we believe is now in the museum of the Yorkshire Philosophical Society. The flesh was tanned into a kind of white fatty substance, and had a very offensive smell. No coins or weapons were found about the body. He was probably some wanderer who had lost his way and perished in the bog, in which he had no doubt reposed for 1400 years. The remains were finally interred in the churchyard of Kirkby Malzeard.

Turner states that no such grave is now identifiable in the churchyard.  Possibly an enquiry in church records might reveal more.  The shoe and clothing fragments are grouped together under Yorkshire Museum Accession Number H 2053.

The article itself is very dry, but a few points stand out.

The diamond arrangement of the thong-slots constitutes the most diagnostic feature of the Grewelthorpe shoe. Shoes with diamond thong-slot patterns are unknown on the continent. With the exception of Caernarfon, they are also absent on sites in the south of Britain…

On present evidence, therefore, the diamond arrangement of thong-slots might occur on shoes of any date between the late first and mid third centuries. The terminal date in particular must remain open due to the paucity of evidence of late Roman shoes.

What we know of Roman fashion in Britain suggests that the ‘toga’ should be construed as a rectangular cloak. That ‘some of the dress was of scarlet material’ may mean that he was wearing a tunic with two purple stripes (clavi) down the front in Roman style. The stockings, while practical, were distinctly rustic in tone. It can only be regretted that the Kirkby Malzeard policeman did not arrive earlier to save more of the clothing of this remarkable find.

Despite being found 140 years ago, the chance survival of an associated shoe-sole confirms that Grewelthorpe Man died during the period of Roman occupation. …

From the circumstances surrounding the other bodies from British upland bogs, particularly those from historic times, it seems unlikely that Grewelthorpe Man was the victim of a ritual sacrifice. He probably died through exposure or other natural causes and was buried by chance in the bog. This led to the survival of his clothing, which appeared to retain its full range of colours. The description of his rather rustic garb and his badly repaired and uncomfortable shoe in balance suggest that he was a civilian rather than a soldier.

I had never heard of the Grewelthorpe body.  What a marvellous find!  What a pity that no photograph was taken!