I heard an interesting story yesterday.

Also recently discovered that the Indian Christian tradition was so well established by AD 325 that the First Ecumenical Council in Nicaea had at least 1 delegate from the Indian Church.   … “India” was a more nebulous entity than the modern nation, so it may not have been within the confines of modern India, but “John the Persian, of all Persia and great India” is recorded at Nicea. Other interactions with “India” are described, like Pantaenus in 180.

The Pantaenus is from Eusebius.  But who is “John the Persian, of all Persia and great India”?

The second bishop of which history makes mention is John, who in the Council of Nicaea of 325 signs himself “ bishop of the Great India and Persia.”[2] If historical this John must have presumably been the bishop of a town in North India, close to the frontiers of Persia proper.

In the signatures to the decrees of the Council of Nicaea, as reproduced by Cyzicenus,[3] the same entry is found : “Joannes Persa, Ecclesiis in tota Persia et Magna India.” In 1908 [4] I treated as a fable the presence in the Council of Nicaea of this John the Persian, and for Persia I substituted Perrhe, on the Upper Euphrates. Against this view may be urged the fact that Eusebius of Caesarea was present at the Council, and that in his De Vita Constantini,[5] he actually makes mention of a bishop of Persia as present in the Council: “Quidam etiam ex Perside episcopus Synodo interfuit.” The presence, therefore, in the Council of Nicaea of a bishop John, from one of the numerous sees of Persia of the beginning of the fourth century, preferably Riwardashir, is not altogether impossible. Michael the Syrian expressly states in his history [6] that this John the Persian attended the Council of Nicaea. We must admit, however, that in a passage of Michael the Syrian quoted above, the expression “Great India” is used of Ethiopia and Arabia Felix combined. Speaking of the Council of Nicaea, Barsalibi, another well-known West Syrian writer says : “Among the Fathers of the Council Jacob of Nisibin and Ephrem his pupil, Ithalaha of Edessa, Mara of Macedonopolis, and John of Persia, were Syrians.”[1]

This is no doubt the origin of our story. 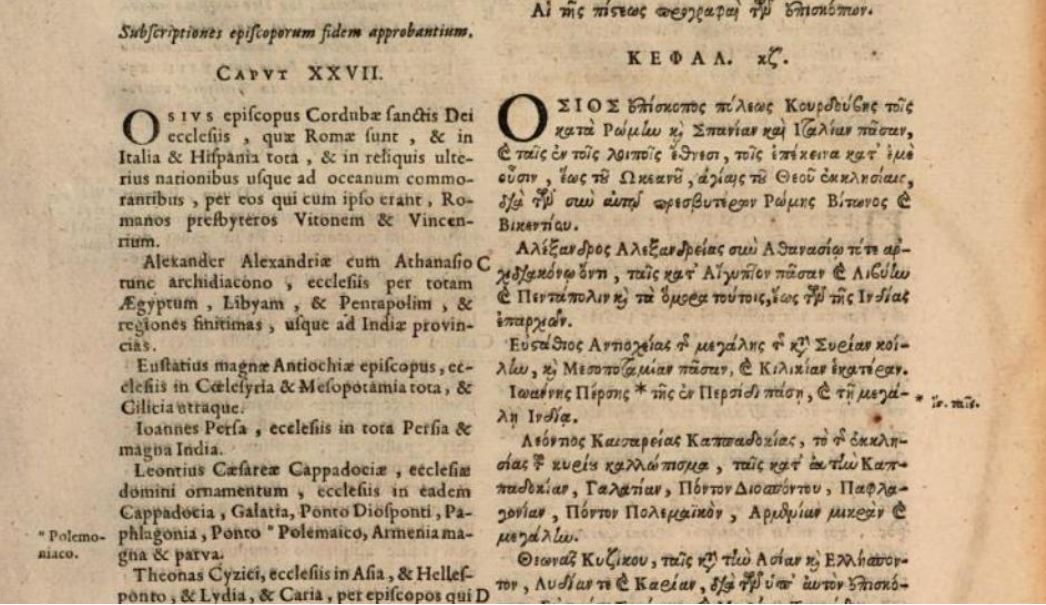 Gelasius was given a critical edition for the first time by G. C. Hansen, Anonyme Kirchengeschichte (Gelasius Cyzicenus, CPG 6034), de Gruyter, Berlin-New York, 2002; GCS N. F. 9.  This, being a German publication, printed without translation, of an obscure text which the editor chose to suggest is anonymous, is naturally accessible to almost nobody.  (I saw a copy offered for sale online for nearly $200!)   Luckily a kind correspondent supplied me with the page (p.85).  The chapter is 28, rather than the 27 of Labbé.  The entry for John duly appears on line 22.

Dr Hansen suggests (p.xi) that the work was composed around 480 AD.  This date is no doubt based upon the contents which include discussion of ecclesiastical controversies of a period rather later than Nicaea.  He also suggests that the work is a compilation of earlier writers, including the lost Gelasius of Caesarea, Theodoret, Philip of Side, and so forth.

I’ve never looked at the ancient lists of delegates.  An article that might address this is E. Honigmann, “The Original Lists of the Members of the Council of Nicaea , the Robber Synod and the Council of Chalcedon”, Byzantion 16 (1942-1943), pp. 20-80, but this also is inaccessible to me, since my JSTOR access via my old university does not include it.