As with April, only a single manuscript of the Chronography contains an image for the month of May.  This is MS Vienna 3146, which never contains the poems. So again we are reliant on other unillustrated manuscripts, or the indirect tradition, for the poems.

All the treasures of spring, and the roses coloured like gems,
Behold! May has them, wrapped in linen in a basket.
The month is named after Maia, the daughter of Atlas,
Which Urania rightly loves most.

Blessed May in now follows these (months) with all its strength,
Which (it is said) Jove has assigned to Mercury, son of Maia.

Housman noted that the second line was clearly corrupt and suggested that Mercurio is a gloss.  To me the obvious accusative and infinitive Jovem … tribuisse indicate reported speech, and therefore that the missing text must have a sense something like “it is said”.  Divjak and Wischmeyer thought the same in their German version.

Again the image is only preserved in the 16th century Vienna manuscript 3416, folio 23 (online here): 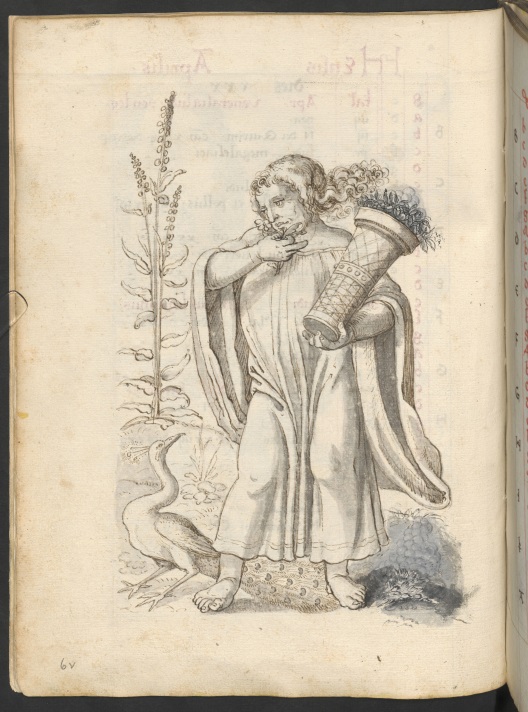 The depiction is of a figure holding something to his nose, together with a peacock and flowers in a kalathos.  From the first two lines of the tetrastich, the vessel is perhaps full of roses; and the figure is holding a rose in his right hand.