There are three early modern editions of John the Deacon’s Life of St Nicholas.  These are the Mombritius (1498), Falconius (1751) and Mai (1830-ish) editions.  I have already used Abbyy Finereader 15 to create a word document for each containing the electronic text.

But how to compare these?  I took a look at Juxta but did not like it, and this anyway is ceasing to be available.  For Collatex I have only been able to use the online version, and I find the output tiring.  But Collatex does allow you to compare more than two witnesses.

The basic problem is that most comparison tools operate on a line-by-line basis.  But in a printed edition the line-breaks are arbitrary.  We just don’t care about them.  I have not found a way to get the Unix diff utility to ignore line breaks.

Today I discovered the existence of dwdiff, available here.  This can do this quite effectively, as this article makes clear.  The downside is that dwdiff is not available for Windows; only for MacOS X, and for Ubuntu Linux.

Fortunately I installed the Windows Subsystem for Linux (WSL) on my Windows 10 PC some time back, with Ubuntu as the Linux variant.    So all I had to do was hit the Start key, and type Ubuntu, then click the App that appeared.  Lo and behold, a Linux Bash-shell command line box appeared.

First, I needed to update Ubuntu; and then install dwdiff.  Finally I ran the man command for dwdiff, to check the installation had worked:

I then tested it out.  I created the text files in the article linked earlier.  Then I needed to copy them into the WSL area.  Because I have never really used the WSL, I was a bit unsure how to find the “home” directory.  But at the Bash shell, you just type this to get Windows Explorer, and then you can copy files using Windows drag and drop:

And got the output, which was a bit of tech gobbledegook:

The [-…] stuff is the value in the first file; the {+…} is the different text in the second file.  Other text is common.

There were also some useful options:

So I thought I’d have a go.

First I went into word and saved each file as a .txt file.  I didn’t fiddle with any options.  This gave me a mombritius.txt, a falconius.txt and a mai.txt.

I copied these to the WSL “home”, and I ran dwdiff on the two of them like this:

The files are fairly big, so the output was piped to a new file, op.txt.  This I opened, in Windows, using the free programmer tool, Notepad++.

The results were interesting, but I found that there were too many useless matches.  A lot of these were punctuation.  In other cases it was as simple as “cujus” versus “cuius”.

So I opened my falconius.txt in Notepad++ and using Ctrl-H globally replaced the punctuation by a space: the full-stop (.), the colon (:), semi-colon(;), question-mark (?), and two different sorts of brackets – () and [].  Then I saved.

I also changed all the text to lower case (Edit | Convert Case to| lower).

And then, most importantly, I saved the file!  I did the same with the Mombritius.txt file.

Then I ran the command again, and piped the results to a text file.  (I found that if I included the common text, it was far easier to work with.)

Then I opened myop2.txt in Notepad++.

This produced excellent results.  The only problem was that the result, in myop2.txt, was on very long lines.  But this could easily be fixed in Notepad++ with View | Word Wrap.

The result looked as follows:

That, I think, is rather useful.  It’s not desperately easy to read – it really needs a GUI interface, that colours the two kinds of text.  But that would be fairly easy to knock up in Visual Basic, I think.  I might try doing that. 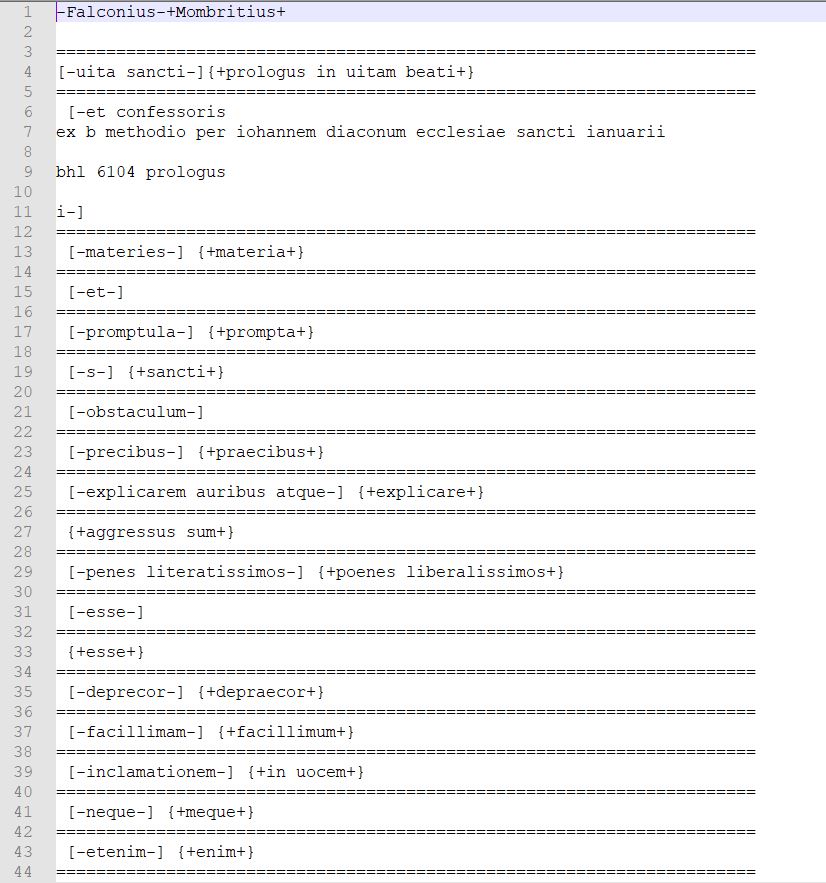 This is quite useful as far as it goes.  There are some things about this which are less than ideal:

Surely a windows tool with a GUI that does it all could be produced?

The source code for dwdiff is available, but my urge to attempt to port a linux C++ command line utility to windows is zero.  If there was a Windows version, that would help a lot.

Maybe this afternoon I will have a play with Visual Basic and see if I can get that output file to display in colour?