At the start of my working life, fresh out of university, I was trained as a computer programmer and then assigned to a maintenance project.  This involved doing bug-fixes and small enhancements to an already rather elderly system, written in a near-obsolete language, and running on an IBM mainframe.  If I tell you that the annual run required the creation of a punched card, to be fed into a card-reader, you will see how obsolete it was.  I can still remember my first boss creating the card using a magnificent Hollerith brass card-punch.  It was, by then, a museum piece.

From this I learned a very great deal about the right way – and the wrong way – to work on a large software project.  I did quite a few contracts, later in my career, which involved similar situations, and it helped a lot at interview that I had that experience.  Some of the lessons learned were still of use to me, right at the end of my career.

One such lesson was that, when faced with a big piece of code, hundreds or thousands of lines in length, it was best to print it out.  This was easier with the massive high-speed printers attached to the IBM mainframes, although it could take hours before the print was brought up by the operators.  Once you had this before you, a selection of coloured ballpoint pens were your friend.  You could draw all over it.  You could underline and highlight bits.  You could see, for the first time, the structure of the whole monster.

You cannot master a serious size document on a computer screen that gives you 80 lines of text at most.  The human mind will not take it in.

I still used this technique occasionally in my later years.  I seem to remember sitting in an office in Cambridge, printing out code using Word and a laser printer, while my colleagues looked on in bemusement or embarrassment.  This faded once they saw the results.  They had brought me in to solve an impossible performance problem.  I fixed it in a week. 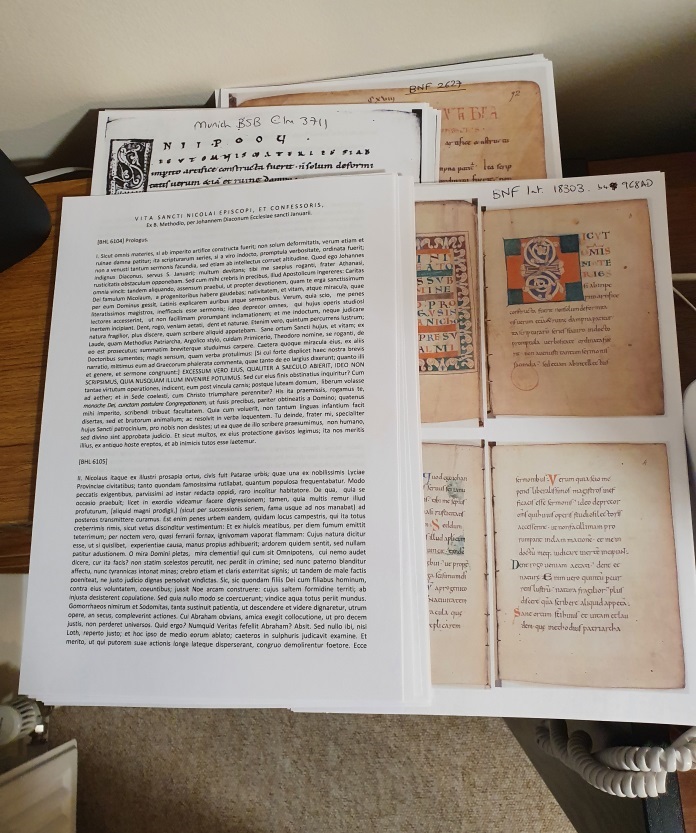 Medieval manuscripts are long wodges of text.  It is really quite hard to see them as a whole.  This makes them rather similar to software modules.  So… let’s try the same technique!

This evening I have printed off three manuscripts on my slow home Canon inkjet printer.  I also printed the text of the Falconius edition which I am using as a reference.

The next step will be to mark up the chapters in each.  Then, I hope, it will be possible to work with them!

5 thoughts on “Printing out medieval manuscripts in preparation for editing”