Finally!  At last we have more than one manuscript containing an image for August, the first month where this is so since March.

Look for spring waters and transparent cups in glass,**
So that a thirsty man may drink with submerged mouth.
By the immortal name of a reign is the month designated,
In which, they maintain, that Hecate was born from Latona.

“vitro” is ablative singular, so I am not sure how that fits with the rest of the first line.  The reign mentioned in line 3 is that of Augustus.  On line 4, the Roman goddess Diana in one of her aspects took on the role of the Greek Hecate as goddess of the underworld. Her birthday was celebrated at Nemi on August 13th.

You also, venerable Sextilis, in every year,
(Under) the** name of the divinity of Augustus †in the year you come†.

The last words are those in the manuscripts, but Divjak and Wischmeyer suggest that they are corrupt; apparently the editions give various suggested emendations.   I don’t see how the nominative “nomen” should be understood – “under” is a guess.

The rather more authentic 17th century R1 manuscript, Vat. Barb.lat.2154B (online here) gives us this, including the tetrastich and the first line of the distich (the other is on the facing page): 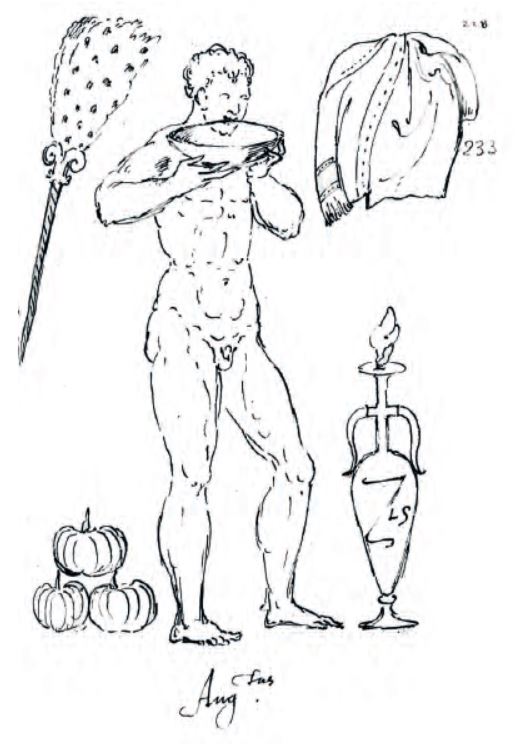 Divjak and Wischmeyer explain all this, so I shall summarise what they tell us.

All these images represent the heat of August, unsurprisingly, and ways to cool off.  The image shows a naked man, thirsty from the summer heat, drinking from a bowl.  The chin is visible through the bowl, so this is a glass bowl, as the first two lines of the tetrastich indicate.  Around the man are three melons; a large vessel with a flame coming out of it; a flabellum (ceremonial fan) with peacock feathers atop a spiral pole; and a jacket with elaborate decoration, including fringes at the cuffs, perhaps associated with the .  In the Vienna manuscript the vessel has a coat of arms with “ZO” on it; the others show “ZLS”.  The Vienna manuscript omits the jacket.  The R1 manuscript shows the (surely original) frame.

The jacket is perhaps associated with the Vulcanalia of August 23, a festival when fires were lit.  At this time garments were hanged up in the sunlight, according to a poem by ps.Paulinus:

They add that the ZO/ZLS means “ΖΗΣ(ΗΣ) / ZES(es), a formula that is very often found in connection with precious drinking vessels such as gold glasses.”

5 thoughts on “The August Poems in the Chronography of 354”