Since late May, I have been beset by an almost farcical number of trivial circumstances, each requiring my full attention, yet of no importance once they are dealt with.  Without going into much detail, these have included an emergency house move at the end of June, yet I am still in boxes; and trying to refurbish and let my old house, so far without success after a month; and a huge number of other things of a similar nature.  One minor circumstance associated with this is getting the electricity and gas meters working correctly and my account with the provider set up.    If I tell you that I have been in contact with the CEO’s office a couple of times a week for the last month, and things are still not fixed, you will appreciate the sheer amount of time that has disappeared down the drain of the mundane and annoying.  Likewise yesterday afternoon and this morning were spent on  telephone calls and emails trying to get a gas boiler repair organised for a third property for which I am responsible, which, after 10 years of functioning perfectly decided to cause a problem now.  An elderly relative became seriously ill mid-way through the move, and I am obliged to have a video call 4-6 times a day to help her cope.

Beyond a certain point, you have to laugh.  The situation is so ridiculous that, if a passing aircraft accidentally shed part of its load while I was walking in a meadow underneath, and I was hit by a falling piano, this would not even raise an eyebrow.  Into every life a little rain must fall.  It seems to be my turn.  But what God wills is good.

On the positive side, I now live in a country village!

I mention all this because there are people out there who are doubtless wondering why they have not had a reply to some email, or why I don’t engage with them.  I do apologise, but I hope this will explain.

Over the last few days I have been advised to sit at the computer after meals for at least half an hour, and try to relax.  So I have returned to John the Deacon’s Life of St Nicholas, although only in a limited, non-stressful way.  Chapters 12 and 13 of the Mombritius edition of 1498 (?) have a text markedly different from that of the Falconius edition (1751).  Rather than trying to resolve this, I have decided to do a little light translating, and so I have worked on these.  Anything difficult I shall just mark in red and leave.

This weekend, I decide, I shall do nothing more, no chores, and do nothing other than stuff that I want to do.  The week is enough time to spend on the dreck.

I learned from a kind correspondent that copies of a St Nicholas related book were available fairly cheaply online at the moment.  I took the plunge, and the volume arrived today. 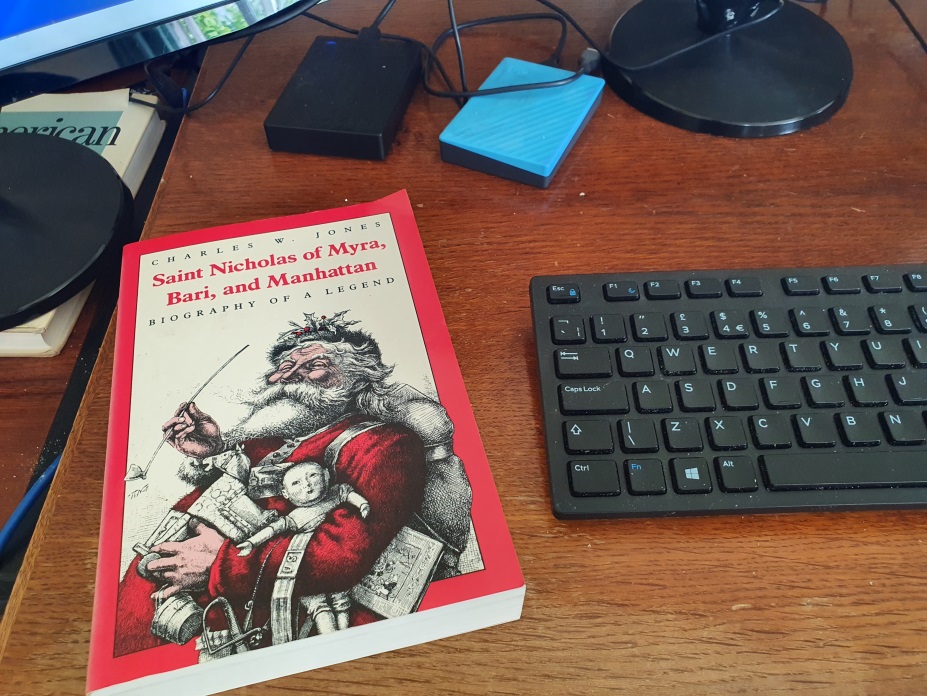 I’ve managed to make my first ever sale on eBay, of a set of noise-cancelling headphones.  I bought these for my last contract but one.  This was a government client, which put all the programmers in an office along with lots of noisy sales staff.  The programmers needed to concentrate.  The sales staff needed to make noise.  So the poor programmers perforce all bought headphones, out of their own money, to try to get enough quiet to think.  I did likewise; but I scarcely used them, as I got fed up and left after a month.  At least now they are off the floor.

I have a large pile of books that need to go as well.  I have my massive Oxford Latin Dictionary, which I never use and takes up a lot of space.  Moving home draws attention to such things.  But I’ll get to it.

6 thoughts on “From My Diary”