Four manuscripts of the Chronography contain an image for this month.  This includes the Barberini manuscript, with the poems.

After this, limbs clad in a linen cloak,
He worships the sacred things and goddess of ancient Memphis:
The greedy goose is hardly kept in check by him with a sistrum,
And, just enough, the ‘dweller’ devoted to the gods, O Memphis.

The “dweller” is perhaps the sacred snake in the temple, depicted in the image.

Gone are the leaves, and its frosts reclaim the month,
When Sagittarius shakes off the lofty Plough.

I’m not sure of the sense of the second line here.

Probably the most faithful of the renaissance copies is R1, Ms. Vatican Barberini lat. 2154 B, fol. 22r.  The tetrastich is in the margin at the right – plainly a later addition -, the first line of the distich at the bottom. 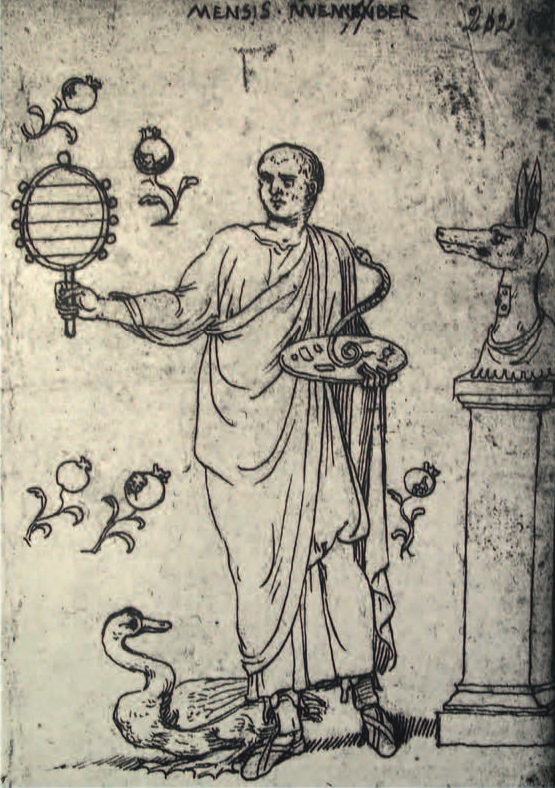 And finally the Berlin copy: 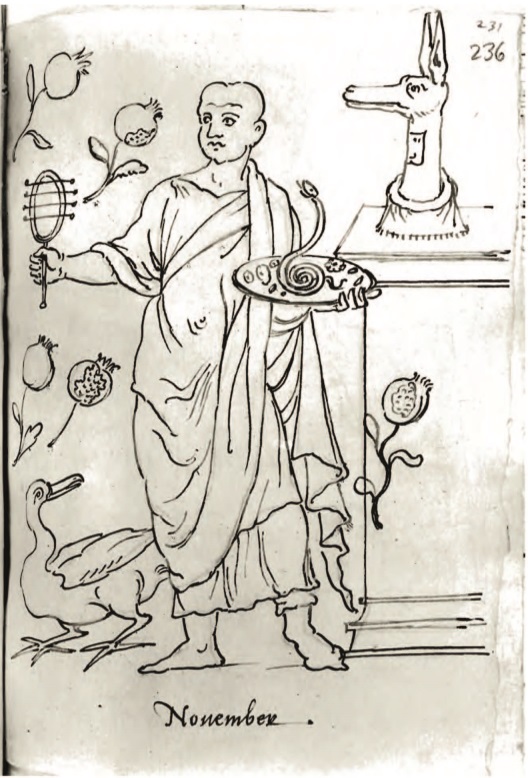 From Divjak and Wischmeyer, I learn that November is associated with the cult of Isis and the festival of the Isaia.  The depiction is of a bald-headed priest of Isis, wearing a linen robe and holding a sistrum in his right hand.  On either side of the arm are two pomegranates, with stalks and leaves.  Below these is a goose.  In his left hand he holds a plate, from the middle of which a sacred snake rears up.  There are objects on the plate – possibly leaves or fruits. To the left is another pomegranate, and then an altar, on top of which stands an animal head, a jackal, as in Anubis, with a cloth base and some kind of plate in the middle of the neck, perhaps a hinge?  Is it perhaps an Anubis mask, worn over the head?

UPDATE: 10 Nov 2022: Correction to translation of Distich, thanks to Suburbanbanshee.
UPDATE: 28 Nov 2022: More corrections to both, thanks to Alexander MacAulay.
UPDATE: 29 Nov 2022: And resolution on the tetrastich from Diego – thank you.

9 thoughts on “The November Poems in the Chronography of 354”