The Latin text that I am working on has never had a critical edition.  I am actually not sure what the author wrote at points, because the editions differ so much.  What to do?

These days we have lots of manuscripts online.  But … how do we go about comparing them?  Where do we start?

Googling has not produced anything very useful.  So I thought that I would record my own thoughts, as far as I have got.

The only practical guide that I have seen is in Martin West’s Textual Criticism and Editorial Technique (1973).  On page 66 he tells us:

The manuscript is compared with a printed edition word by word, and the differences written down. Some people write them in the margins of the edition, but even if the copy is interleaved this does not give one room for more than a few manuscripts’ variants, and I usually use a separate notebook. It is essential in this case to record in writing which edition has been used for the collation, for if that is not known a collation loses much of its value. (One must bear in mind the possibility that one’s collations will one day be used by someone else, and one must therefore make sure that it is clear in this and in all other respects how they are to be interpreted.)

It is best to choose an edition which is light to travel with, will always be easily available, and keeps close to the paradosis (to minimize the amount of writing necessary); and to use the same one for each collation.

Every effort should be made to prevent confusion between the collations of different manuscripts. If they are done into the printed copy, the best thing is to use different coloured inks[2]); in a notebook, the manuscript should be identified at the top of every page.

Care must also be taken to avoid ambiguity about the location of the variant. In prose texts the lines should be numbered down each printed page and the numbers used for reference. If the variant is for a word that comes twice in the same line, or might be read as being for either of two similar words, it must be made clear which one is in question.

[2] Collations should always be in ink. If washable ink is used, beware of rain.

He goes on to add that, if you have decided to ignore some trivial points, like iota subscript (in Greek), make a note that you have done so.  Always record corrections and marginal notes.  It’s a good idea to note where the page turns; an omission in another manuscript at precisely that point is evidence of copying.

These are all good, practical points.

Now I’d like to add a couple of my own, as far as I have taken things, which is not very far.  What I write relates to Latin, but no doubt applies more or less equally to Greek.

2.  The best way to get familiar with a Latin text, and its peculiarities, is to prepare a translation of it.  This forces you to grapple with every word, and to work out what the author is saying and how he says it.  I know a Swedish philologist who intended to edit one of the works of Tertullian.  In preparation for the task, he prepared a translation of it, into English (!)  It may seem burdensome, but it is really a huge aid.

In my own case I have a Word file with the text broken down into a sentence or two, with my draft English translation interleaved.  This also gives me a place to write notes and… to start noting manuscript variations.  Here’s a bit from my current opus:

Of course a single file can be overwhelming.  I work a chapter at a time, and only combine them once I’ve done three passes on each.

3.  You need an edition to use as a base text.  It doesn’t matter what it is, or whether it is any good or not.  In fact a late pre-critical text, “vulgate” text, with interpolations, but punctuated, can be ideal for this purpose.  It’s likely to be based on some, dead common manuscript.  In that case, it will save you a lot of typing.  It’s just the rail on which you will hang your notes, and it is far easier to mark it with “this bit not in XYZ”.

4.  Get it into an electronic form, so you can use it as I did above.  I use Abby Finereader Pro 15, which isn’t that expensive and does Latin very nicely.  Once you have it in electronic form, you can do searches on it, when you’re staring at some manuscript and can’t remember “where does it say ‘Armata'”?  You can do comparisons automatically with other editions too, as I remarked in my last post.  You can copy and paste bits of the manuscript images into a Word document if need be.

5.  Get some manuscripts downloaded in PDF form.  The Gallica website Bibliotheque Nationale Français is great for this.  Finding manuscripts can be a pain, but this will certainly get easier as time goes by.  You should have a PDF editor on your machine, which will allow you to extract just the pages that you need.  Then you can mark it up.  I’ve used bookmarks to indicate key points in the text, and sticky notes to indicate, within a page, just where something is.  For instance in the image below, “laetamur” is the start of “chapter 15” of the printed text.

I have a folder full of manuscripts, indicating whether they are microfilm or real, and with the date in the file name (which I recommend): 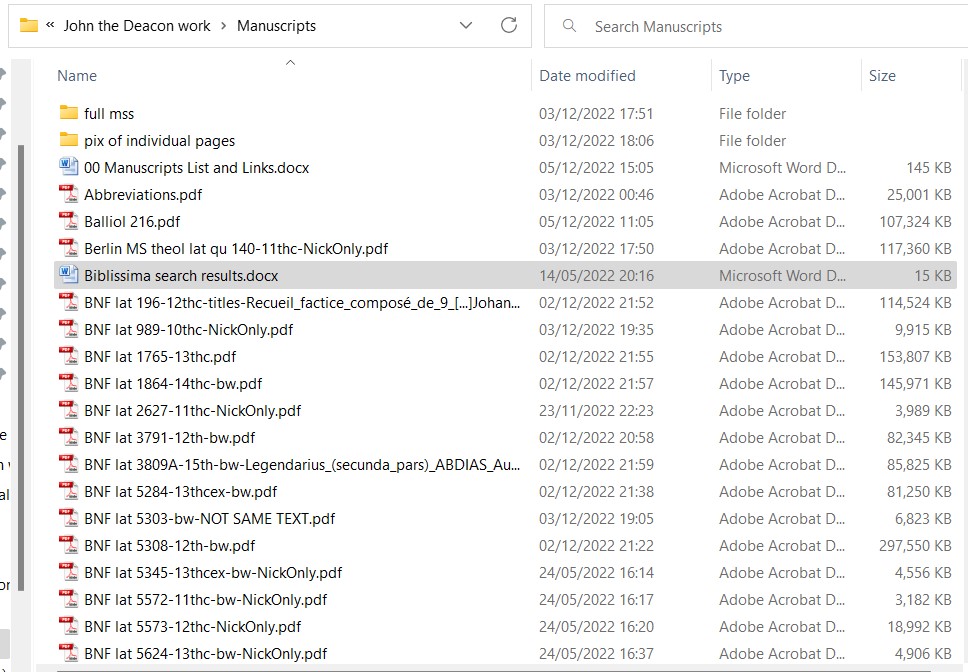 So far I have been looking at these, and marking up divisions in the text, and indicating where the chapters of the edition are.  This makes it faster to access the pages that you want, and helps you to start getting to grips with the text.

That’s as far as I have got for now.  My working file already indicates places where the editions disagree, so I will start noting the readings of the manuscripts for the same.  I’ll write another post when I’ve done more!