I’ve been looking some more at Byzantine science.  My original intention was to write a series of posts on each area of science.  But I’m finding that in fact I don’t know enough about the subjects to do so.  In particular knowledge of Byzantine mathematics and astronomy seems to require more knowledge of the works of Aristotle than I possess.  So I will probably do no more on this.

Yesterday I was looking at an English translation of a poem by al-Akhtal, the court poet of the early Ummayads, whom I wrote about here.  This led me to wonder how to post a poem on WordPress, which is what this blog runs on.  There is no feature in the blogging platform to support the sort of alternately indented lines that a regular poem has.  I found quite a number of posts asking why there is not a plugin to make this possible.

A bit of experimentation, and I developed a basic wordpress plugin with very little difficulty, that added a drop-down to the editor with a set of new and custom styles to apply to the text.  I set up Xampp locally on Windows 10 and installed WordPress inside it.  A short article told me what a simple plugin looked like. Another told me how to use a generator to create one, which I did, although I had to create a GitHub account to use it.  Finally another article advised me on how to do the changes manually; which I did instead inside my plugin, adding the PHP code to the main generated plugin .php file, and sticking a css file in the root.  It all sort of worked, and I pushed it to GitHub.

But … it just did not work to format poetry.  The problem is not the plugin.  The problem is that WordPress strips whitespace in a manner impossible to control.  You can insert stuff in a poetic format.  But the moment you open the post in the visual editor, that format is destroyed.

This is a fundamental problem with poetry in WordPress.  It can’t be fixed, unless or until the main developers address the whitespace handling issue.

The only possible approach is to format it all as <PRE>, which is not much of an answer and looks terrible.

Perhaps it says something about the importance of poetry in our society, that the main blogging platform for writing online makes it impossible to post verse?

I need to return to translating Eutychius of Alexandria.  I have a couple of books to review.

My trip to Rome later this month will not now happen, after my travelling companion became ill.

I read this morning that the publishing industry continues its campaign against the SciHub pirate website, through which alone normal people can access most journal articles.  Apparently a US judge wants to prevent Americans from accessing it.  That should certainly give China an advantage!  The site itself is apparently hosted in Russia, fortunately.

To finish, let me attempt to post the poem by al-Akhtal, in preformatted format, as translated by Suzanne Stetkevych.[1]  I laid it out in Notepad; but my attempt to create a preformatted block and paste it in was a complete failure.  Even preformatted text is not handled well by the visual editor, it seems.  In the end I switched to text view and pasted it in there, with <pre></pre> tags around it.  This gives the following appearance: 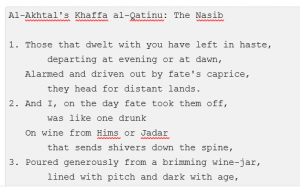 How long will it remain formatted, I wonder?  Well, let’s see!

Here is the complete poem, that al-Akhtal delivered before the caliph, while drunk.

The poem grows on you, as you read it.  The caliph was well pleased, as we learned last time.

While reading this post by Nassim Nicholas Taleb yesterday, I encountered the following interesting statement:

.. the 7th Century Christian Arab poet Al-Akhtal made a point to never eat halal meat, in his famous defiant poem boasting his Christianity: “I do not eat sacrificial flesh”

The article is talking about ways in which a minority can impose its values on a culture, and the context is the creeping way in which foodstuffs are made kosher or halal by manufacturers, simply for sales reasons.

But this is not important here. However I can quite imagine the quotation taking on a life of its own, and I’d like to track it down.

We do not tend to think of 7th century Arab poets who were a Christian.  I’d never heard of al-Akhtal.  So who was he?

Via a Google Books preview of an Encyclopedia of Arabic Literature, I found this article by G.J.H. Van Gelder:[1]

Ghiyath ibn Ghawth al-Akhtal was one of the great poets of the Umayyad period. Although he was, like his tribe, Taghlib, a (monophysite) Christian, he was favoured by leading Umayyad statesmen such as Ziyad ibn Abihi and al-Hajjaj. and even became the most important court-poet of the caliph Abd al-Malik. He was probably born in Hira in Iraq. In his youth he was a close companion of caliph Yazid I, with whom he shared a taste for heavy drinking. The many passages on  wine and drinking in his poems make al-Akhtal an important early bacchic poet. His fame as a poet rests mainly on his panegyric and invective, which are often combined in his numerous poems supporting Umayyad policy and attacking its opponents – state politics being, to a large extent, tribal politics. His career is closely associated with that of his contemporaries al-Farazdaq and Jarir; siding with the former against the latter, he produced a series of flytings or naqa’id in which personal and tribal invective mix with politics. In his poetry, which serves as both political propaganda and literary entertainment, he builds on the diction, themes and forms of pre-Islamic poetry. The panegyric ode of al-Akhtal and his contemporaries acquired a classical status: it became a model for subsequent periods. Not yet affected by the characteristics of the ‘modern poets’ or muhdathun, its language and diction were accepted by philologists and critics as sources of ‘pure Arabic.’

Other materials can be found about Akhtal online, which repeat anecdotes of his role as a poet at the Damascus court of the Ummayad caliphs.  What I was unable to locate was any sign of English translations.  Nor was I able to find any source for the quotation (although I have tweeted an enquiry to the article author).

Let me end instead with an Academia article here by Suzanne Stetkevych which perhaps might illuminate the context in which Akhtal may have made his remark.[2]  The anecdote is by someone named al-Iṣbahānī, Kitāb al-Aghānī:

Al-Akhṭal came before ʿAbd al-Malik ibn Marwān who asked him to recite for him. “My throat is dry,” responded the poet, “Order someone to bring me a drink.” “Bring him some water,” ordered the Caliph. “That’s for donkeys,” said al-Akhṭal, “and we have plenty of it.” “Then give him milk.” “I’ve long since been weaned!” “Then give him honey.” “That’s for the sick!” “Well, what do you want?” “Wine, O Commander of the Faithful!” “Have you ever known me to serve wine, you bastard?! If it weren’t for the inviolable bond between us, O what I would do to you!” So al-Akhṭal left and came upon one of ʿAbd al-Malik’s attendants. “Damn you,” he said to him, “the Commander of the Faithful ordered me to recite, but my voice was hoarse. Give me some wine!” So he did. Then al-Akhṭal said, “Match it with another!” So he did. “You have left the two of them fighting in my stomach, better give me a third!” So he did. “Now you’ve left me listing to one side, give me a fourth for balance.” The servant gave it to him, and al-Akhṭal went before ʿAbd al-Malik and recited:

Those that dwelt with you have left in haste
departing at evening or at dawn,
Alarmed and driven out by fate’s caprice
they head for distant lands.

When he finished the poem, ʿAbd al-Malik said to a servant boy, “Take him by the hand, boy, and help him out, heap robes of honor upon him, and reward him generously.” Then he proclaimed, “Every people has its poet, and the poet of the Banū Umayya is al-Akhṭal.”

The poem is in fact much longer than the single verse given, and endorses the Ummayads at length.  The “transgression” above is for asking the Muslim ruler for wine.  Indeed Akhtal was so visibly drunk by the end that he had to be helped out of the room!  But the importance  to an Arab ruler of being endorsed by an established poet was greater than any newly made-up rules about wine.

It is curious to note that there is no real interest in our society in making Arabic literature  accessible to us all.  A proper handbook of Arabic literature, like Brockelmann’s Geschichte der arabischen Litteratur, but readable and brought up to date, would be a benison.  As it stands, who but specialists can even access this literature?

UPDATE: Well, well.  On p.116 of the Journal Asiatique article are the verses we seek.  The caliph Abd-al Malik was hardly very committed to Islam, but still made the effort.

One day, when Akhtal came to recite a brilliant panegyric, the prince asked, “Why don’t you become a Muslim?”

“I will,” said the poet, laughing, “so long as you grant me the use of wine and an exemption from Ramadan.”

Abd-al Malik, whose proposal was serious, took this ribaldry badly.  “Know,” he said, “that once you become a Muslim, if you neglect even one of the obligations of Islam, I’ll have you beheaded.”

Unfazed, Akhtal responded with these verses:

“No! I will never observe the fast of Ramadan, nor eat the flesh of sacrifices.
Never will I drive a young and robust camel towards the valley of Mecca in the time of pilgrimage.
Never will I cry out like a donkey, “Come! To prayer!”
But I will continue to drink the blessed liquor, and to prostrate myself at daybreak.”

“But,” said the Caliph, “what attraction has this wretched drink for you?”

“Sire,” replied Akhtal, “when I drink then I don’t worry about you any more than about the strap of my sandal.”

“Improvise some verses on this thought,” said the Caliph, decidedly in a bad mood, “or I will lift your head off from your shoulders!” The poet had to comply; but luckily in this matter he was not taken off-guard:

If my wish makes me take two goes to empty three cups of a generous vintage, I get up, dragging the folds of my robe as if I was your master, O Master of the Faithful.[3]

The first reference given is “Divan 156 and 154”.  This appears to be a publication “Divan of Akhtal”, published by the Catholic press at Beirut “last year”.  This is probably an Arabic publication of some kind; at any rate, beyond my ability to locate.  Is it perhaps the “Shi’r al-Akhtal” listed above?

Still good news to find even this much.

UPDATE: See the comments for more information.  I have just added a link to the other edition to the post.

UPDATE: A tweet from Dr Taleb advises me that his source was this online collection of Arabic poetry, and this page here.  This gives the verses: