Anthony Alcock has sent in a translation of a curious anonymous Greek text in 8 chapters, concerning the Apotelemata (Talismans) of Apollonius of Tyana.  The content is astrological, concerned with names and words.

The work appears in medieval Greek astrological manuscripts, but also in a Syriac version as an appendix to the gnostic apocryphal Testament of Adam, itself perhaps dating from the 2-5th centuries AD.  There are also Armenian versions of part of it, themselves clearly translated from an unknown Arabic text.[1]

The translation is here:

I was able to find some discussion of this work in an article by Christopher P. Jones, “Apollonius of Tyana in Late Antiquity”, in: S.F. Johnson, Greek Literature in Late Antiquity: Dynamism, Didacticism, Classicism, 2016, p.57 f. The article is online here.

“… Boll thought the work an ‘impudent ﬁction’ composed shortly before Eusebius’ Reply to Hierocles, while Nau was inclined to defend it as genuine; the obviously later ingredients, such as the reference to a church built by Apollonius in Tyana, he explained as later interpolations. The work cannot be by Apollonius and, as Speyer has noted, must be much later than Boll supposed, though it is still an interesting document deserving of consideration here. …

The writer reveals his Christianity at every point, both in his subject-matter and in his choice of words. He thinks that Apollonius was born early enough to predict the birth of Christ, and even (if the obvious interpretation is correct) that he founded a church in Tyana.

As for language, ναός denoting a Christian church is ﬁrst apparently found in Eusebius, and προσκυνητός seems almost entirely a Christian usage. For στοιχειόω in the sense of ‘enchant’, ‘perform talismanic operations upon’, Sophocles’ Greek Lexicon of the Roman and Byzantine Periods cites no example before Theophanes Continuatus (not earlier than the ninth century).

A span of 800–1200 is presumably about right for the composition of the work. It may be relevant that Tyana was an episcopal see as early as 325, and after being lost to the Arabs was recovered for the Byzantine empire in the tenth century; the site has also produced remains of a church datable to that same century.

Though irrelevant to Apollonius’ fortunes in late antiquity, therefore, the treatise shows the same acceptance of him into Byzantine Christianity that is implied inter alia by his appearance in art as a prophet of Christ.

The Life of Apollonius of Tyana by Philostratus is a curious text with an evil history.  It was perhaps originally composed in the Severan period, quite innocently, as a mainly fictional work based partly on earlier sources about the pagan sage of the last first century AD.

But it was then used, and perhaps re-edited, as a tool for anti-Christian propaganda during the Great Persecution under Diocletian, by Hierocles, the governor of Bithynia.  We learn from Eusebius how this unattractive man began his persecution first by putting out a series of forged texts.  Material designed to set Apollonius up as a “pagan Christ” – and a superior one – formed part of this campaign.  This PR campaign was designed to denormalise and to marginalise the Christians, whom he intended to murder, by first depicting them as deluded, irrational, unreasonably dogmatic and ignorant of the “real origins” of their faith. Having done this by way of preparation, he then felt able to begin the violence.

We know much of this from Eusebius, who wrote a refutation of the “Apollonius” material, under the title of Adversus Hieroclem. By chance this too has come down to us, and which has been printed together with the Life of Apollonius since the editio princeps of Aldus Manutius in 1502.[1]  Indeed the excellent N. G. Wilson has just published an edition and translation of the Aldine prefaces, including that on Philostratus and Eusebius, reviewed in BMCR.

The Life of Apollonius has come down to us in a number of Greek manuscripts.  But I find, absurdly, that the text has not been edited since the Teubner edition by C. L. Kayser of 1870![2]   Even that refers back to the edition by the same editor of 1844 for its critical work.[3]  The Loeb editions, which give us our English translations, simply work from Kayser.

Fortunately Dutch scholar Gerard Boter, who reviewed the most recent Loeb here, has come to our rescue, with an excellent article on the manuscripts, preparatory to a new edition.[4]  I imagine that few of us have a grasp on the manuscript tradition, so I thought that we would all be served by summarising it here.

The manuscripts are as follows, and doubtless more are online than I have seen.  The sigla are newly assigned by Boter, but all are mentioned by Kayser somewhere.[5]  I include Kayer’s sigla in brackets, as these are probably used in older literature, but Boter’s are clearly better-chosen.

After comparing them, Boter tells us that the manuscripts fall into two groups, A and the rest.  The rest all derive from a lost ancestor, α, which was a close cousin of A.  These children divide into two families: β, consisting of BEMPTU; and γ, being FGHLQRSVYZ.  Kayser considered the manuscripts of the β family generally had a better text, but that A was the most important manuscript.  (Identifying the “best manuscript” was very much the method of the time).

From all this, he draws the following stemma, of which manuscript is copied from which other manuscript: 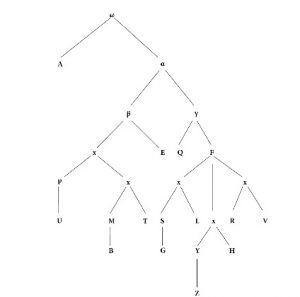 There are also extracts from the text in other manuscripts.  Boter does not discuss these, but Kayser lists a few:

The Boter article was in 2008.  That is now 8 years ago.  Let us hope that a new edition is being assiduously pushed forward!  It is certainly overdue.

I learn from Dr Boter’s home page of another article: “Studies in the Textual Tradiiton of Philostratus’ Life of Apollonius of Tyana”, Revue d’histoire des textes (RHT) 9 (2014), which, according to this link, does discuss the manuscripts individually and also the excerpts.

I find that another article by him, “The title of Philostratus’ Life of Apollonius of Tyana“, has appeared in the Journal of Hellenic Studies 135 (2015) 1-7.

I have no access to either article, but I was amused to see the JHS home page try to obtain “$37.50 to buy this article” or – desperately, since nobody on earth would pay that – “$5.99 to rent this article now for 24 hours”!  I rather think that actually Dutch taxpayers have already paid for the article.  But from such examples of tawdry greed let us avert our eyes.

Instead, let us welcome the prospect of a new and much more accurate edition of this interesting text.  It is not every late antique text that gets two Loeb editions, after all.