Fake gospels have been composed continuously from the second century until our own times.  The object is either to convert Christians to something else, or to make money off them.

One interesting example, which I have discussed before, is the Archko Volume, a collection of “ancient documents” corroborating the events of the New Testament, but in reality composed by a rural American presbyterian minister named William Dennis Mahan and self-published in 1884.  It’s a fairly crude fake, but has remained in print since.  The intended victims appear to be rural American Christians with limited education, and it is still marketed to them now.  The author was caught and tried by his church, found guilty and suspended for a year.  But nobody was going to allow a money-spinner to go out of print, and after a quick revision to remove some of the more damning evidence, it went into a “second edition” which is what circulates today.

I’ve recently come across some more material about this item, telling us about the author, and also about why it is circulating today.

Firstly, I have always wondered if Mahan was an honest man who outsmarted himself.  Perhaps he tried to compose a historical novel, in epistolary form, and found his parishioners took it as real?  Once money changed hands, a poor clergyman might be trapped in the mistake.

Recently I came across a collection of materials from his presbytery, the Cumberland Presbytery, and this has an entry for W.D.Mahan, listing his appointments.

Until 1885 he was a minister of the New Lebanon Presbytery.  In that year we read:

1886“Your committee to whom was referred the motion to grant W. D. Mahan a letter of dismission and recommendation after the term of his suspension expires, have had the subject under consideration, and in view of all the surrounding facts, and in view of the interests of the Church, we recommend the following:

Whereas, This Pres., at its session in Slater, Sept. 29th, 1885, did suspend from the functions of the ministry, for one year, W. D. Mahan; said one year terminating on the 29th of the present month; and

Whereas, The definite form of said suspension was more the result of sympathy for him and his family, than a desire for rigid administration of the law, and this sympathy being exercised under the hope that said W. D. Mahan would use all proper efforts to heal the wounds his course had inflicted; and,

Whereas, It now comes to the knowledge of this Pres., that he still occupies the same position, by the sale of his publications, and by negotiations to bring out new editions, therefore;

Resolved, That the suspension of the said W. D. Mahan, be, and the same is hereby declared indefinite, or, until he shall have complied with the law of the Church, as it applies in the case.”[Source: Minutes of the New Lebanon Presbytery of the Cumberland Presbyterian Church, September 10, 1886, pages 185-186]

I do not yet see online the source documents, but we need only wait.  A couple of other documents are reproduced at the same site, including the following:

After the suspension he made no effort to return to the pastorate, but lived quietly at the home of his son-in-law, a hotel keeper in Booneville. He declined to make any further statement regarding the part he had taken in the preparation of the book except to say when it was told him that the literary world pronounced it a forgery: ‘Well, I have been a much deceived and a much persecuted man.’

It would be interesting indeed to know what lies behind those words.  But even so, it is useful to hear this much.

The book has certainly been profitable.  I discovered today that an American TV preacher named Benny Hinn promoted its modern circulation until quite recently.  A blogpost by Tony Breeden of “Defending Genesis” in 2011 asked bluntly why. 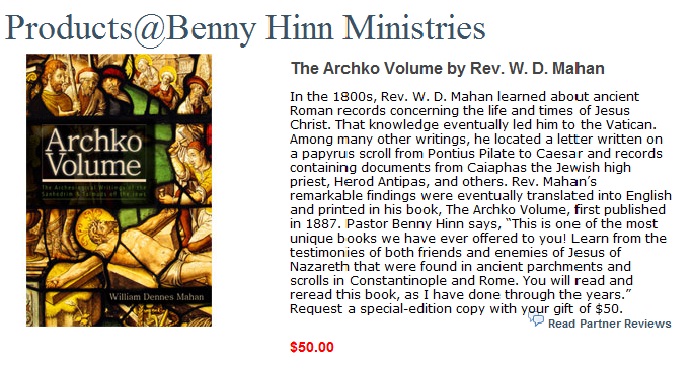 Realizing that Mr. Hinn’s television broadcast reaches 200 countries worldwide and has hundreds of thousands if not millions of viewers, I hastily contacted his organization by phone…

But to no avail.  Breeden, who had no a-priori objection to Hinn, wrote a follow-up article at another blog later in the year here.  It seems that his experiences led him to conclude that Hinn also was a fraudster.  The correspondence does give the impression of dealing with a sales-oriented retail business organisation, rather than anything else.

Fortunately I find that the promotion has now vanished from Hinn’s site.  Mind you, at $50 a copy, the profit margin was pretty substantial.  Another blogger in 2011 remarked:

It’s a well-intentioned fraud, but it’s a fraud nonetheless. And you can buy it on Amazon (if you must) for $10, which is a fair bit less than Hinn’s $50.

I was just about to wrap-up, when I learned of something even more peculiar, on LinkedIn, of all places: the existence of a 38-minute film adaptation “Archko Confessions” made by someone named Douglas King.  According to IMDB he is a writer and director, known for Scrubbed (2014), A Second One Night Stand (2017) and This is Libby (2018).  Nice!  His LinkedIn profile says:

“Marketed to the Christian market”; of course.

But what did Christ say about all this?  Something about the love of money…?

Curses, curses.  The Archko volume is loose again.  This evening I found a bunch of posts on various fora around the web, all referencing it to show that Jesus was white.  It seems an unnecessary effort, surely, given that we all know that God is an Englishman.

The Archko volume appeared in 1884 edited by a certain Rev. W. D. Mahan of Boonville in the USA under the title “Archaeological writings of the Sanhedrin and Talmuds of the Jews: Taken from the ancient parchments and scrolls at Constantinople and the Vatican at Rome: Being the record made by the enemies of Jesus of Nazareth in his day.”  At the foot of the title page are the revealing words “Published for the author by Perrin and Smith, Book and Job Printers…” — in short, it was self-published.  The contents are interesting:

Chapter I.—A short sketch of the several books of the Talmuds, with Historical References, 5
Chapter II.—Dr. Rubin’s Letter, as taken from the “Brunswicker,” Dr. Mclntosh’s Letter to the People of America, and Rev. W. D. Mahan’s Letter from Rome to his family, 24
Chapter III.—Eusebius’ History of the Emperors of Rome.  Constantine’s Letter in Regard to having Fifty Copies of the Scriptures Written and Bound for Preservation, – 32 Chapter IV.—Jonathan’s Report of his Interview with the Shepherds of Bethlehem; also, Letter of Melker, who was Priest of the Bethlehem Synagogue when Jesus was Born, 37
Chapter V.—Gamaliel’s Report of his Interview with Joseph  and Mary in Regard to their Child Jesus; also, of his interview with Massalian, and Mary and Martha, – – 55
Chapter VI.—Caiaphas’ Report of the Sanhedrin, giving his Reason for the Execution of Jesus of Nazareth, – – 76
Chapter VII.—Caiaphas’ Second Report in Regard to the Resurrection of Jesus, —— 100
Chapter VIII.—Eli’s Story of the Magi, – – – 113
Chapter IX.—Acta Pilati, or, Pilate’s Report of the Arrest, Trial and Crucifixion of Jesus, – 201
Chapter X.—Herod Antipater’s Defense Before the Roman  Senate Concerning his Conduct at Bethlehem, – – 231
Chapter XI.—Herod Antipas’ Defense Before the Roman Senate Concerning his Execution of John Baptist, and Other Charges, – – – – – – – 240
Chapter XII.—The Hillel Letters Regarding God’s Providences to the Jews, ——- 247

Mahan opens his book with the following words:

Believing that no event, of as much importance as the death of Jesus of Nazareth was to the world, could have transpired without some record being made of it by his enemies in their courts, legislations and histories, I commenced investigating the subject. After many years of study, and after consulting various histories and corresponding with many scholars, I secured the assistance of two learned men—Drs. Mclntosh and Twyman—and went to the Vatican at Rome, and then to the Jewish Talmuds at Constantinople, incurring a risk of my life as well as expending a good deal of money. As a result, I have compiled the following book, which will be found one of the most strange and interesting works ever read. It may appear fragmentary, but the reader will remember that it is the record of men made nearly two thousand years ago.

Mahan found himself with a best-seller on his hands, and was quickly making good money.  But his success attracted questions.  Other clergymen in Boonville wrote querying how he could possibly have made any such journey, given that he had only left Boonville for a couple of months.  Others questioned how it was that “Eli and the Story of the Magi” was at points word-for-word identical with the 1880 novel “Ben Hur”.  In the end Mahan was brought before a church court, convicted of forgery, and suspended for a year; and he passes out of the light at that point.

Some years later a “revised” version appeared.  Thoughtfully it omitted “Eli and the story of the Magi”, and gathered the various notes which Mahan had prefixed to each text to form a new introduction.  It seems to have been the work of a bookseller’s clerk, as no new material was added, and certainly booksellers of a certain kind have profited mightily from it since.  Mahan perhaps thought to emulate the sort of fiction that Rider Haggard was writing in the same period, but did so too ineptly for his own good.  The cynical bookseller merely sought cash by exploiting the credulity of rural Christians in the USA.

So the book is a fake.  It’s one of the rash of pseudo-gospels composed in the late 19th and early 20th centuries.  E. J. Goodspeed, who studied the New Testament Apocrypha, grew weary of students appearing with these things and wrote a book Strange New Gospels about them.  I placed it online here, and you may read about the Archko volume accordingly.   He later revised the book as Modern Apocrypha.  Per Beskow produced a further volume of the things, under the title Strange Tales about Jesus.

When I came onto the web 13 years ago, the Archko volume was being produced by unwary believers as evidence of Jesus.  I myself obtained a copy of the first edition (1884), and also of the second edition, as this was the only way to access such things.  Today we have Google books, so the curious may find the original text here, and the revised “second edition” from 1896 here.  A search in Google books will find newly printed copies for sale with cynical publishers’ blurb such as:

Ongoing debate over this classic work’s authenticity makes this book an engrossing read for those interested in judging for themselves.

Fortunately these things have largely vanished from the web, and so I have not had to spend any time on it for years.  But … it’s baaack.

Be prepared to explain, politely and inoffensively, that it’s a scam.