As the year grows older, bright warm days grow fewer, and more precious.  Fortunately this week we had two; yesterday and today.  I resolved to take a break from contract-hunting, and go somewhere.  After some thought, a trip to Cambridge beckoned.

I started as I usually do, by visiting the University Library.  I dropped in during the summer and renewed my library card.  But at that time I’d got a photocopy of an article and forgotten one page.  So that was something.  Likewise I wanted to look at Bousset’s book on the Apophthegmata for a blog post.  That was something else to do.

Everywhere there were cyclists.  In the library there were welcome desks, and tours.  Clearly it was freshers’ week.  All those young faces.  Others walked hand in hand.  I wished for a moment that I had made more effort to meet someone at university.  It gets so much harder to find someone suitable after!  Among these strode or cycled the occasional third year, faces which seemed too knowing or mature for their years.

My mobile phone kept buzzing, but I’d set it to silent.  I did sneak out to the courtyard to talk to one agent. 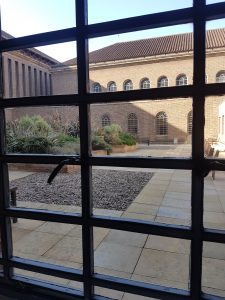 Every time I make one of my infrequent visits I find that something is different.  This year there was no photocopying room any more; just photocopiers scattered around.  I got the missing page easily.  The search engine on the website was different too.  Whatever happened to “Newton”?

Bossuet appeared in 1923, which means he is not online; but was in the Rare Books Room.  I hadn’t been there for years and years.  It was much the same, except that now we could use our mobile phone cameras!  The assistant told me that I wasn’t allowed to photograph, except for personal purposes, or put the results on the web.  The prohibitions were, of course, quite unenforceable.

I settled down to snap some photos.  Fortunately I quickly realised that Bousset contained little that I needed, and a couple of dozen photos would serve my needs.  Because I wanted to be out in the sunshine!

Then I was done.  Back I went out of the library, showing my card as I did so.  Into the sunshine, and walked down towards the backs.  So many cyclists!

Over the river I went at the backs… 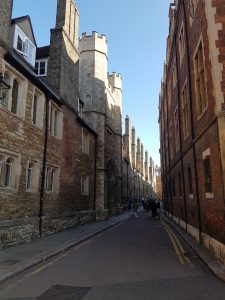 I was making for a sandwich shop next to the Round Church in Cambridge.  But it wasn’t there any more!  How long, I wondered, since I had last walked the pavements of Cambridge.  I made do with a not-very-good teashop nearby, for I was hungry.

My next stop was Heffers, the university bookshop.  But I was shocked… the basement, in which there were always shelves of history and theology books, was now turned over to Harry Potter junk.  The whole shop was a shadow of itself.  Doubtless Amazon is to blame.  When I found the classics section it consisted of two cases only.  I walked from there down Green Street to Galloway and Porter, where I had bought many a remaindered textbook back in the day.  But it was gone.  Bookshops were at a discount.

I ended up walking along to CLC, the Christian bookshop.  It still existed, thankfully, but around it were endless ethnic restaurants, with name boards in scripts even I don’t know.  But within it too was a husk, or so it seemed to me.  Then again, what is gone is gone.

The sun shone, the streets were full of young and happy folk.  The city bustled with life.  The University Hotel had been rebuilt after a fire with a quite magnificent stone portico, of a sort that evoked the Victorian age.  On the side they had proudly chiselled MMXVII.  That’s the spirit!

Finally I passed by Kings, and headed back to the UL and my car.

After that, a long journey to the outskirts, and then home.  But it was a lovely day.  I haven’t done any trips anywhere for over a year.  This was a nice exception.  It’s really important to make time for fun!