A couple of years ago I came across a strange volume, designed to smear the ancient Christians.  It was authored by a recent arts graduate named Catherine Nixey, and titled “The Darkening Age”.  Her publisher had arranged some fawning reviews in the mainstream press, which was unfortunate as her facts were often in error.  One of the reviewers, I recall, clearly knew that it was nonsense, but equally clearly had been told to give it a good review!   It was really striking how heavily it was promoted.

Ignorant of all this, I found the author tweeting smugly on twitter, and giving a supposed “quote” from Chrysostom.  The unfortunate results – for her – appeared on my blog in this article, Hunting the wild misquotation again.  The book never seemed to get much traction online, and I confess that I filed it away and forgot about it.

Today I came across a thread in Dutch on twitter which revealed that her publisher has arranged for the book to be translated into five languages (!)  The thread also contained evidence of good reviews over there too!

The only reason that all these favourable reviews can appear, that I can think of, is money.  I assume that the publishers of the newspapers are taking money from the publisher in order to commission these reviews.  The book itself is just malicious tat, and anybody with a bit of education will know it.  It isn’t worth reviewing.  Such books are ten-a-penny.  But … it gets reviewed, and widely, and favourably.  Why?

It would be most interesting to know the sales figures.  Is this book really making money?  There’s something very dubious about all this, to my eye.  I have heard of publishe

The thread contains a review by Dr Roland Kany from the Frankfurt Allgemeine Zeitung: 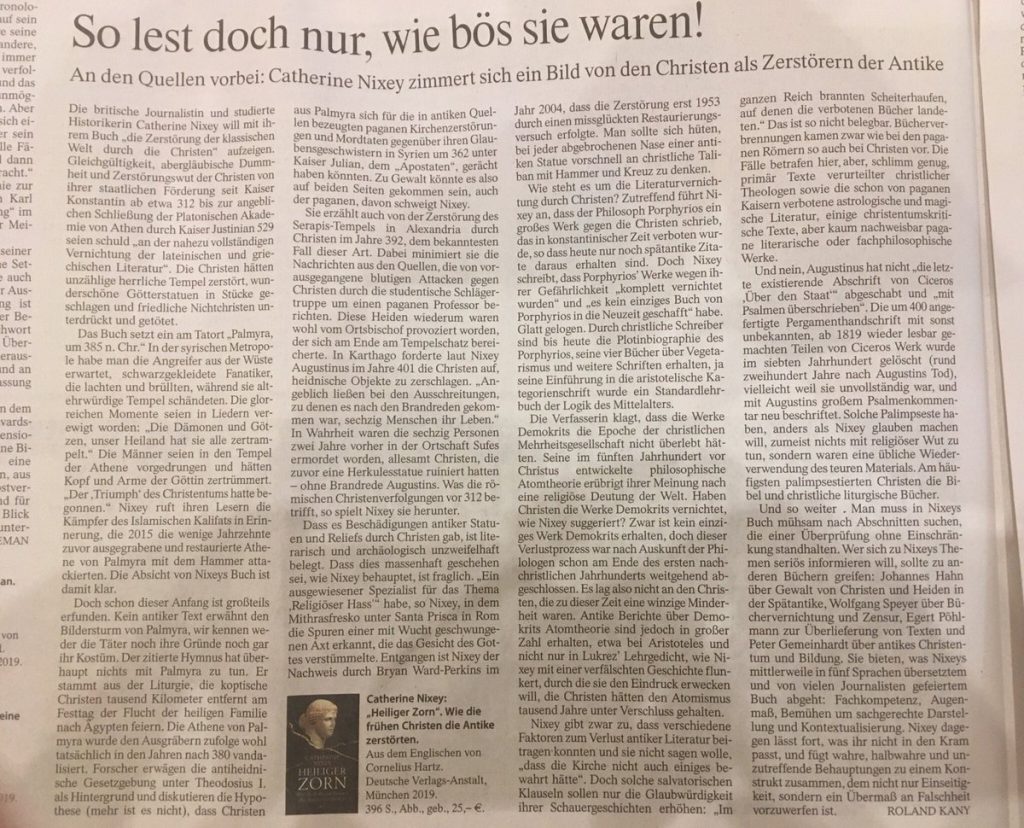 Title: “So just read how evil they are!”

I ran the review through OCR, and created a Word .docx file, which I’ll put here in case you’d like to use Google Translate.

A week or so ago I saw on Twitter a quotation attributed to John Chrysostom, which read as follows:

Chrysostom liked to gloat that the apostles had gagged the tongues of the philosophers and stitched shut the mouths of the rhetoricians.

The author of the tweet was a certain Catherine Nixey, who is an arts journalist for the Times of London.  She has a book out claiming that the Christians deliberately destroyed almost all ancient literature, or some illiterate nonsense like that. 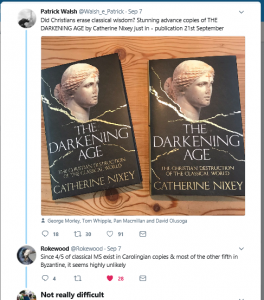 I’m not sure who Patrick Walsh is, but he seems to post announcements of book launches.  Anyway this one met with criticism, and @catherinenixey joined in in response.  She then posted our tweet above.  (The link to her tweet is here; but there is now no purpose in clicking that link, as we shall see.)  I happened to see it; and responded.  Screen grabs are below!

As I always do, I wondered whether John Chrysostom did say this, and if so, in what context.  So I needed a source.  As I went along, I replied to Nixey, starting here: 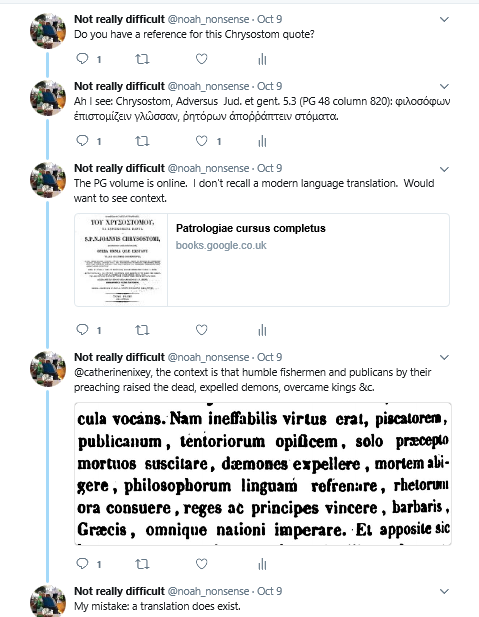 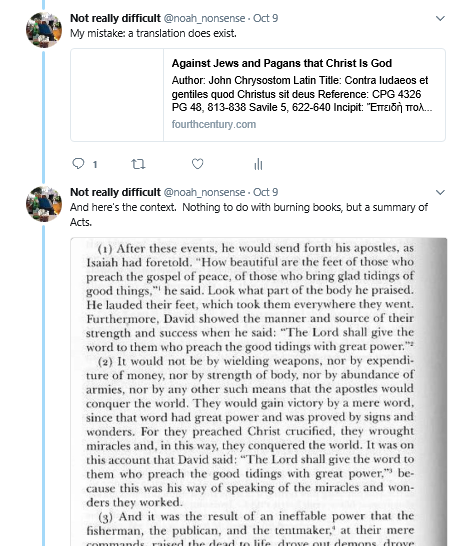 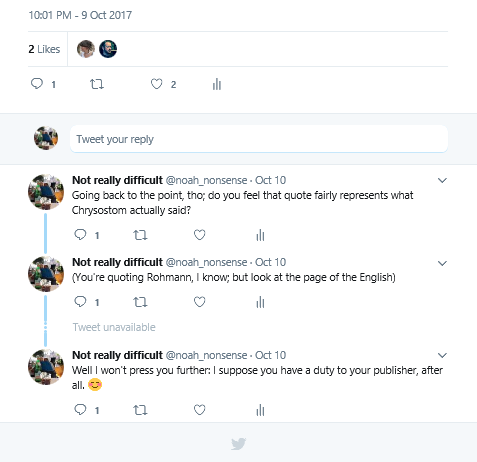 Her response was to brush my results aside and demand I follow her so that she could talk to me by direct message.  She did this a couple of times.

And then… suddenly she deleted her account.  This I discovered when I logged in, intending to write to her.

Then I messaged George Morley, who seems to be her publisher, asking why her account had vanished.  I saw no reply.  So I can only infer that her publisher got windy about how things were going, and told her to stop tweeting fast.

Rather than peering at those screen grabs, let me lay out what I saw.

Name-checking Pythagorean philosophy, John [Chrysostom] justifies the obliteration of ancient philosophies by the beginning of the Gospel of John, implying that the word (lógos) of God is absolute and unchallenged: “Has not all that with good cause perished and been utterly obliterated? – Indeed with good cause and according to the Word!”⁹ In his Demonstration against the Jews and Pagans John demonstrates Jesus’ divinity as a corollary of the success of Christianisation and the subsequent dissolution of the ancient traditions.¹⁰ This, he suggests, is because the apostles were given power over the demons. In John’s metaphorical words, the apostles have “gagged the tongues of the philosophers and stitched shut the mouths of the rhetoricians.”¹¹ This passage echoes a similar statement in an unpublished manuscript (attributed to John) which asserts that “the senate decrees have been overthrown, the philosophers and orators have been put to shame, and the Areopagus has been wiped out.”¹² This statement could be right because it is attested that in the last quarter of the fourth century large private mansions were constructed on the Areopagus hill, traditionally a place that housed archives.¹³

So there is not much question about where Nixey got her idea of Chrysostom gloating over the destruction of pagan literature.  Footnote 11 supplies the reference:

This is Chrysostom, Against the Jews and Pagans, a little known work.  Certainly these words say what Nixey said – they gagged the tongues of the philosophers, they stitched shut the mouths of the rhetoricians.

But that quote gives no context.  What we need is an English translation.  I learned from the bibliography at Fourth Century that one does exist, in Fathers of the Church 73, Chrysostom Apologist, p.210-11.  So here is, not just six words, but the whole of chapter 5.  It is not long.

Chapter 5
The Mission of the Apostles Foretold

(1) After these events, he would send forth his apostles, as Isaiah had foretold. “How beautiful are the feet of those who preach the gospel of peace, of those who bring glad tidings of good things,”‘ he said. Look what part of the body he praised. He lauded their feet, which took them everywhere they went. Furthermore, David showed the manner and source of their strength and success when he said: “The Lord shall give the word to them who preach the good tidings with great power.”

(2) It would not be by wielding weapons, nor by expenditure of money, nor by strength of body, nor by abundance of armies, nor by any other such means that the apostles would conquer the world. They would gain victory by a mere word, since that word had great power and was proved by signs and wonders. For they preached Christ crucified, they wrought miracles and. in this way, they conquered the world. It was on this account that David said: “The Lord shall give the word to them who preach the good tidings with great power,”‘ because this was his way of speaking of the miracles and wonders they worked.

(3) And it was the result of an ineffable power that the fisherman, the publican, and the tent maker, at their mere commands, raised the dead to life, drove out demons, drove off death, stopped the tongues of philosophers, stitched shut the mouths of rhetoricians, overcame kings and rulers, and were victorious over barbarians, pagans, and every nation.

(4) Indeed, David described the situation well in that way. For it was by that word which God gave them that they accomplished all those things they did. And it was with God’s great power that they brought the dead back to life, changed sinners into just men, restored sight to the blind, and drove out disease from the body and evil from the soul. And where did they get that power? That it came from the Holy Spirit is made quite clear from these words: “And they were filled with the Spirit,”’ and both men and women prophesied.

(5) Tongues seen in the form of fire settled on each one of them, as Joel had long before predicted when he said: “I shall pour out a portion of my spirit on all flesh, and your sons will prophesy and your daughters will see visions, and your young men will dream dreams before the coming of the great and illustrious day of the Lord.” [By “the great and illustrious day” he meant both the day of the Spirit and the day which would come at the consummation of the world.] This same prophet predicted salvation through faith—for he did not remain silent on this—when he said: “And it will be that whoever will call on the name of the Lord will be saved

Surely this is just a preacher, going through the events of Acts?  Nothing more.  How is this innocent retelling of the Acts, of the doings of Peter, Paul, and friends, a call for book-burning, fire and sword?  What sort of person would read this like that?

Anyway I posted the screen grab, and asked Catherine Nixey whether she felt that her “quote”, verbally accurate though it was, was a fair representation of what Chrysostom wrote.

Her response was to delete her account.  And that makes me feel rather guilty.  I hope that I did not do her harm.

One final thought.  In view of the attempt to erase the discussion, probably by the publisher, here is a screen grab demonstrating that the @catherinenixey account did indeed exist.  It’s not much; but I am unaccustomed to this kind of thing, so I did not capture her comments.

Does anyone know how to see deleted tweets? 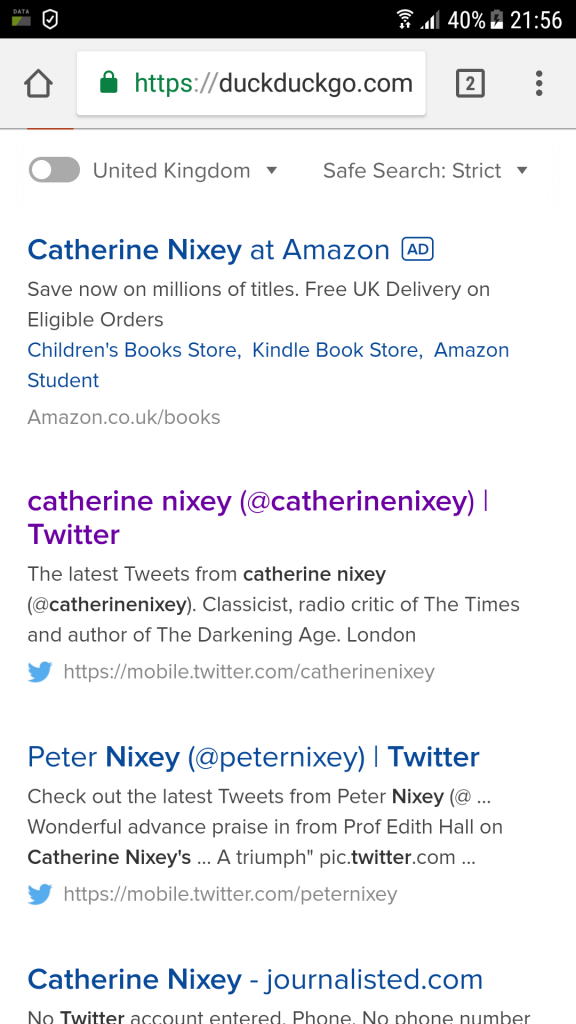