I wanted to know if you know where that quote attributed to Clement of Alexandria “Every woman should be overwhelmed with shame at the thought that she is a woman” comes from? In fact, some indicate that this phrase comes from Clement’s book “pedagogue 2”, but when I went to look there I did not find this quote.

As far as I can tell, the latest translation of the Paedagogus or Instructor is the 19th century Ante-Nicene Fathers, online here.  This does not contain these words.

Lists of quotes designed to demonise always omit context, and often vary in wording and attribution.  Our quote is not different in this respect.  Some suggest that it comes from the Stromateis or Miscellanies book 3, but it does not.  It appears in somewhat varying forms around the web, such as “every woman should be filled with shame by the thought that she is a woman”.  A hate-article, “20 disgustingly misogynist quotes from religious leaders” – none of them Muslim, for some reason – at Salon, by a certain Valerie Tarico, Oct 15, 2014, (online here) gives it in this version, which is sometimes combined with the other:

[For women] the very consciousness of their own nature must evoke feelings of shame. —Saint Clement of Alexandria, Christian theologian (c150-215) Pedagogues II, 33, 2.

There are a number of books from India which reference Bertrand Russell as a source, such as this one.  But that book only references his smug tract in favour of adultery, Marriage and Morality (1929) – one feels for his poor abused wife – which does not contain any reference to Clement of Alexandria.

Rather more helpful is an article “Religion as the root of sexism” by a certain Barbara G. Walker, published at Freethought Today 28 (2011) and online here.

Clement of Alexandria said every woman should be filled with shame by the thought that she is a woman, and quoted Jesus’ words from the Gospel According to the Egyptians: “I have come to destroy the works of the female.”

Barbara G. Walker is author of the monumental feminist/freethought sourcebook The Woman’s Encyclopedia of Myths and Secrets (1983). Her 20 other books, published by Harper & Row, include The Skeptical Feminist.

“Every woman,” says Clement of Alexandria, “ought to be filled with shame at the thought that she is a woman.” [4]

I.e. Patrologia Graeca 8, col. 429.  This too does not contain the words given; but there is indeed something here, in Paedagogus, book 2, chapter 2, towards the end: 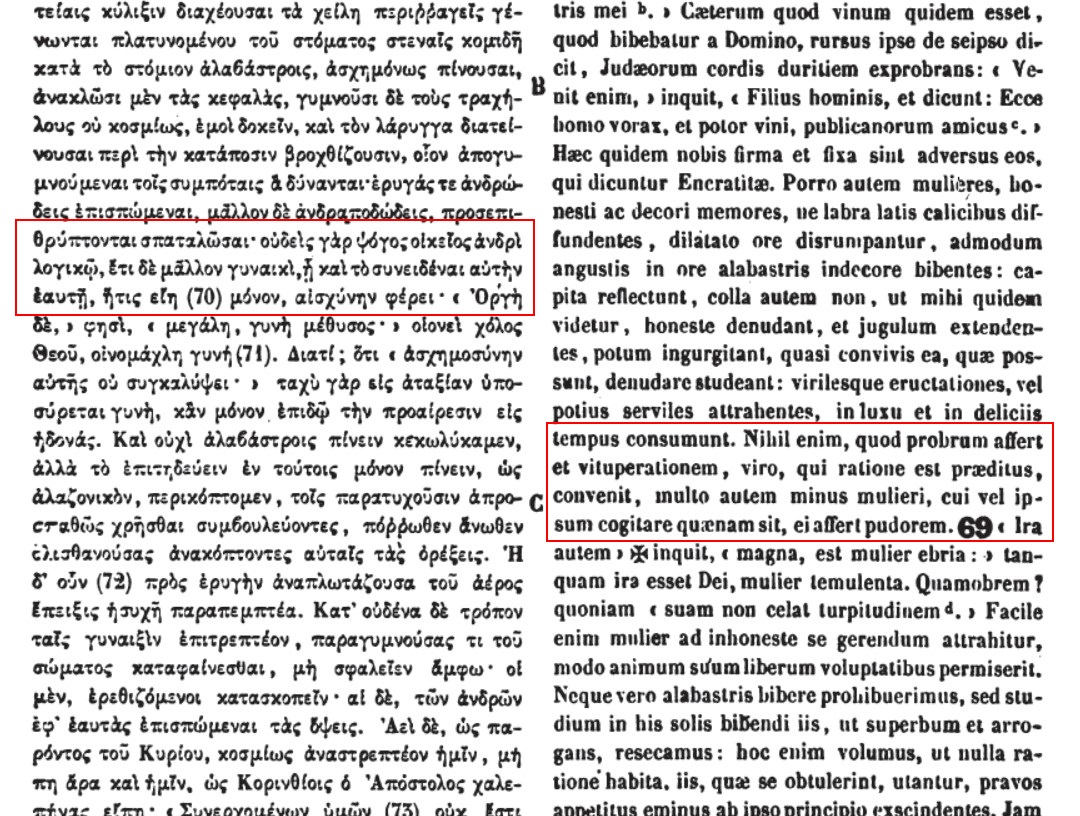 The Ante-Nicene Fathers translation (online here) gives this as follows:

For nothing disgraceful is proper for man, who is endowed with reason; much less for woman to whom it brings modesty even to reflect of what nature she is.

The subject is drunkenness, and how inappropriate it is for men or women.

The Latin, and Google translate:

For nothing that brings shame and reproach is suitable for a man who is endowed with reason, but much less for a woman, to whom even to think what she is, brings her shame.

2. It is not appropriate to make noise (while drinking), neither for a reasonable man, nor even less for a woman, to whom the fact of being aware of herself of what she is, is enough to inspire modesty.

Interestingly the Greek and French have section numbers.  The French edition is mainly a reprint of Stählin’s edition in the GCS series (GCS vol. 12, 1905), and this text is indeed found in section 33.2, just as in the Salon article.  Amusingly Stählin on p.lxxxiii of his edition mentions the numbering thus:

The page numbers of Sylburg’s and Potter’s editions are given in the margin [of my edition], and a table with the page numbers of the Paris edition (1629) will be added at the end of the edition, since it is still frequently cited with them. I have retained Klotz’s division of paragraphs,  despite its shortcomings, so as not to create even more confusion (often Clemens is quoted in three ways in one book). But I have divided the major paragraphs into subsections. In the edition itself it is always cited thus (with omission of the chapter numbers).

The smaller subsections are convenient – the original “chapter 2” is very long – and Stählin’s “subsection” 33 is indeed where our text is found.

This passage of Clement, I think, is indeed the origin of our “quote”.

Exactly what Clement means here is not clear, for it is merely an aside.  It looks to me as if the context is noisy drunkenness; wrong for any rational man, and still more so for a woman precisely because she is a woman.  For nobody, in antiquity or now, wants to see a loud drunken slapper.

But it is quite possible that Clement did have the inferiority of women – a commonplace in antiquity – in mind.  He is writing to people in his own age, after all.  This was an age with much the same vices as our own.  But because everybody owned female slaves, these women were abused even worse than now.  Clement writes, as all the fathers do, to increase female self-respect and social standing, and they are not afraid to appeal to contemporary contempt for certain sorts of female behaviour.

Such nuances are not of interest to the polemicist, nor particularly to us.  Briffault seems to be one of those awful people in the early 20th century who, under pretence of science, sought to debauch the morals of society.   What we have here, I think, is Briffault “improving” the text in order to create a one-liner.  This he could then include in a hit-list of patristic sayings, designed to shock, in order to sway the reader to support his arguments for vice.  The other variants then arise as others “improve” it further to increase the impact.

I have today come across a very curious paper, telling a strange story.  I give the opening portion here.[1]

In the early Spring of 1779 a young French nobleman pulled up his camel outside the ancient monastery of Anba Makar, just off the main route between Alexandria and Cairo. He had in his pocket a letter of introduction from the Pacha, but the thirty-foot walls and the total absence of gates seemed to make a ready welcome unlikely. Louis de Launay, comte d’Antraigues, had left France on 11 June 1778 on board His Majesty’s Ship Caton, accompanying his uncle,the comte de Saint-Priest, French ambassador at the Sublime Porte. He began to record his journey in the minutest detail, in memoirs and letters, which ultimately found their way into the Municipal Library at Dijon.  Little seemed to escape the attentionof this alert and enquiring traveller—archaeology, history, geography, political systems, social customs, religious practices. His strong reactions to the injustices of despotism which he encountered on his journey (Turkey, Egypt, Wallachia, Bessarabia, Poland, Austria) firmed up his political position, which helped him to become a formidable revolutionary pamphleteer by 1789. And his attention to detail was a good preparation for the work he was to do, from 1791 until his murder in Barnes Terrace, near London, in 1812, during which period he was the central figure in the counter-revolutionary espionage network in Europe.

From the foot of the wall of the monastery, which he calls St. Macaire, he managed to attract the attention of one of the monks; the letter of introduction was hoisted aloft on a rope and after some delay the head of house showed himself and invited d’Antraigues and his party in. ‘In’ meant ‘up’: a chair was lowered in which he, his drogman, and two companions were hauled up over the wall; the Arab guide and drivers, having been paid in advance, were left to camp outside the walls.

On the second day, he and his dragoman spent eight hours in the library going through ancient manuscripts. His findings filled him with delight. Not only the authors represented, but the details of the development of handwriting and orthography, the effect of time on different inks, the art of dating manuscripts, all fascinated him. The source of his information on these erudite matters (hardly the stock-in-trade of a rather wild ex-officer and man-about-court) will be referred to shortly. He had done sufficient homework beforehand to be able to recognize a truly remarkable find: a seventh-century manuscript of the Hypotyposeis (Outlines) of Clement ofAlexandria, the second-century Christian apologist and reputed master of Origen. He was aware that the work had always been considered as lost, known only by fragments quoted by Eusebius. Eusebius describes them as summaries, interpretations, and narratives of all canonical scripture.

But what d’Antraigues saw wasquite different: 208 large folio pages of the work,

He goes on to note details of the author and his work:

D’Antraigues saw a number of other manuscripts which he recognized as valuable—a third-century Polybius, a complete Diodorus of Sicily dating from the third century, and a seventh-century Pausanias—and offered to buy them for a handsome price. But these impoverished monks refused, because they knew the French were addicted to magic, and these books were ‘grammars of this diabolical art’. They would rather burn the library down, they maintained, than let them fall into the hands of a Frenchman.

Nevertheless, the simple virtues of these ignorant monks left a profound impression on him; to have robbed them of a book would have been a cruel abuse of hospitality which men of letters might commit, but he was not such a ‘vil escroc’ as that.

Of course not.  What a charming, honest fellow, he must be, this young chap with gambling debts and, no doubt, a manuscript for sale?

The whole narrative is probably false.  What gives it away is the introduction of the three classical texts.  What on earth would a Coptic monastery be doing with Greek texts?  Especially with Greek pagan texts?  And, not just a bit of Diodorus Siculus, but the whole, huge text?  No, this is rubbish.  We see book-lists manufactured during the 17-18th century, which dangle the existence of Hegesippus, of the Greek Irenaeus, of Eusebius against Porphyry and other long lost texts before the eyes of curious westerners.  That all were manufactured by orientals who stood to profit thereby is not in doubt.

Certainly, since d’Antraigues could show great powers of imagination where the depiction of feelings or dramatic scenes was concerned, one has to face up to the possibility that he falsified the account of his discovery of the Clement manuscript. It is very difficult, however, to admit it as serious. Claiming discovery of a non-existent manuscript in memoirs which he never attempted to publish seems rather unlikely for a young man who had no intention of aspiring to membership of the Academie des Inscriptions.

Sadly it is not so simple.  It is possible to think of various ways in which someone who had “made such a find” could expect notoriety, and various useful ways to make money would become possible.

Reading the way in which the article discussed a few of the obvious problems with the account — and devised learned reasons why they were not problematic — brought to mind the way in which people discuss the claims of Morton Smith to have found a letter of Clement at Mar Saba, containing a “Secret Gospel” of Mark.

For the moment the article can be found here, at ScribD.  It is well worth perusing the opening section.