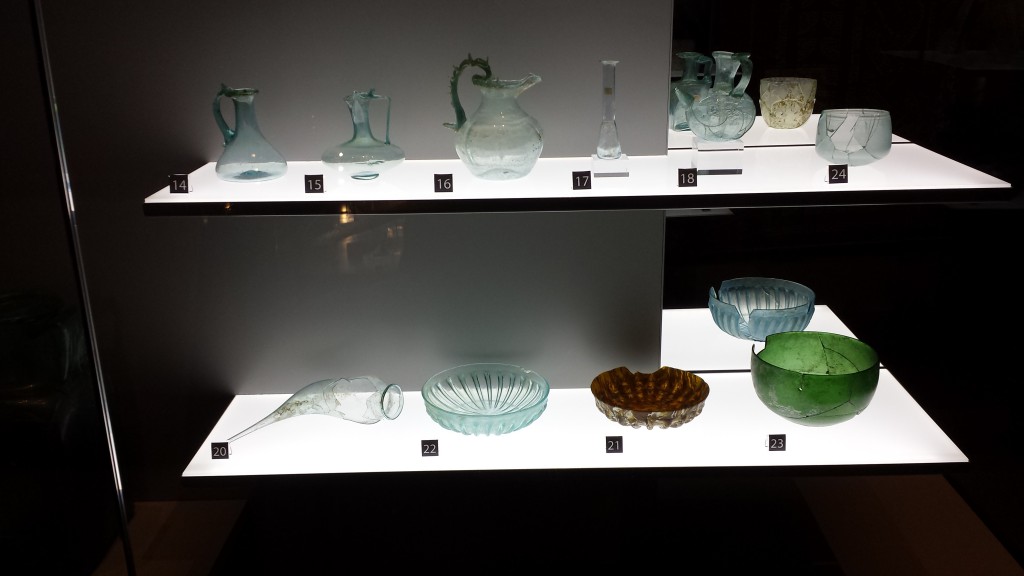 The Roman site of Camulodunum lies beneath the modern British town of Colchester.  By a curious chance, it remains an army town, even today, almost 2,000 years later.

Today I drove there, with the intention of photographing the Roman items on display in the Castle, which serves as the town museum.  The Norman Colchester Castle itself is built on the massive plinth of the Roman temple of Claudius, and is consequently larger than it would otherwise be.

I carried out my intention, using the 13mp camera in my Samsung Galaxy S4 smartphone.  The museum had been dolled up in recent years, and very modern lighting added which often left items in semi-darkness.  But no doubt it functions well as something to interest children – a vital part of its role – although the very high price of admission demanded will ensure that only middle-class children ever visit it.

Interestingly I found that the camera in the smartphone adjusted better to the conditions than my own eyes did.  Many an item was far clearer on the screen, than it was to the naked eye.  The camera adjusted to the conditions, and sharpened automatically.

An example picture is above, showing some Roman glassware on display.  It must be admitted that those who designed the display did make it look impressive!

On the other hand, the camera has adjusted the colours also.  The real items are not nearly so vivid.  This was noticeable at the time with the green bowl, which in reality was a rather faded green.  On the other hand … it may be that this is precisely how these items looked when they were new.

I’ve uploaded the whole photoset to Flickr, so that people can make use of the images as they please.  I also photographed the museum labels, since an absence of these is infuriating in so many online images.

Some of the shots are blurry.  I am no photographer, and I grew incredibly physically weary taking these.  There are 298 photographs in the set!  They were taken over a period of something over an hour.  I tried to photograph every Roman object on display.  But for those on display there are, apparently, many more!