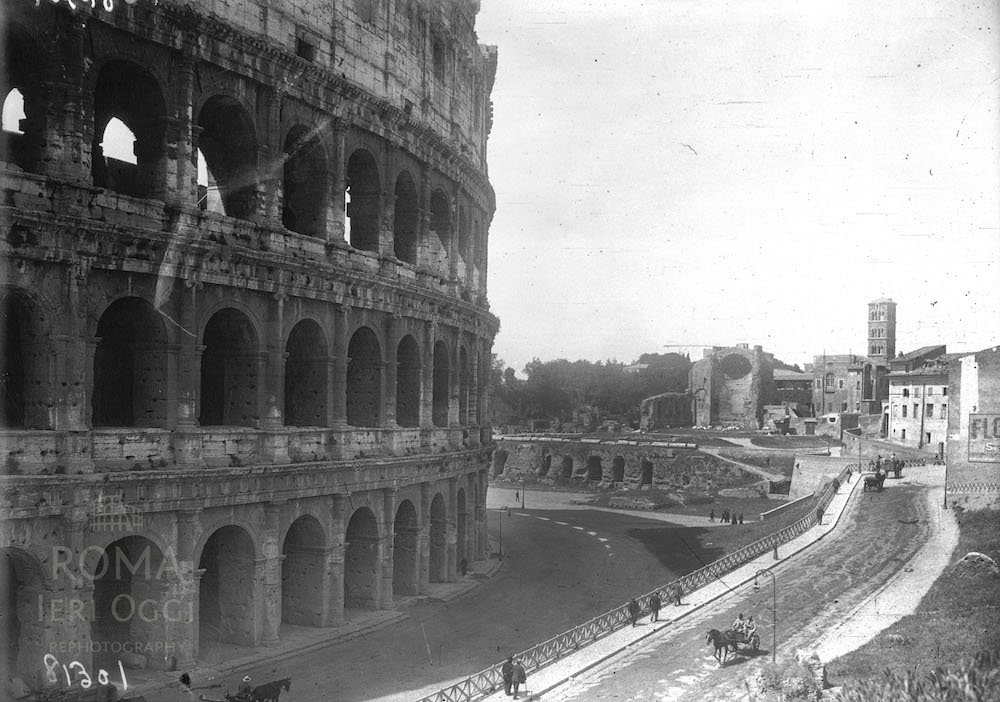 Here’s a curiosity!  Have you ever wondered what Rome would look like, to someone from the alien cultures of China or Japan?

David Blocker kindly emailed me the following image, which he found on Wikipedia here.  It was made by a Japanese artist who had never seen Rome, and to whom a ruined stone city was utterly alien since he lived in a world constructed mostly of wood. 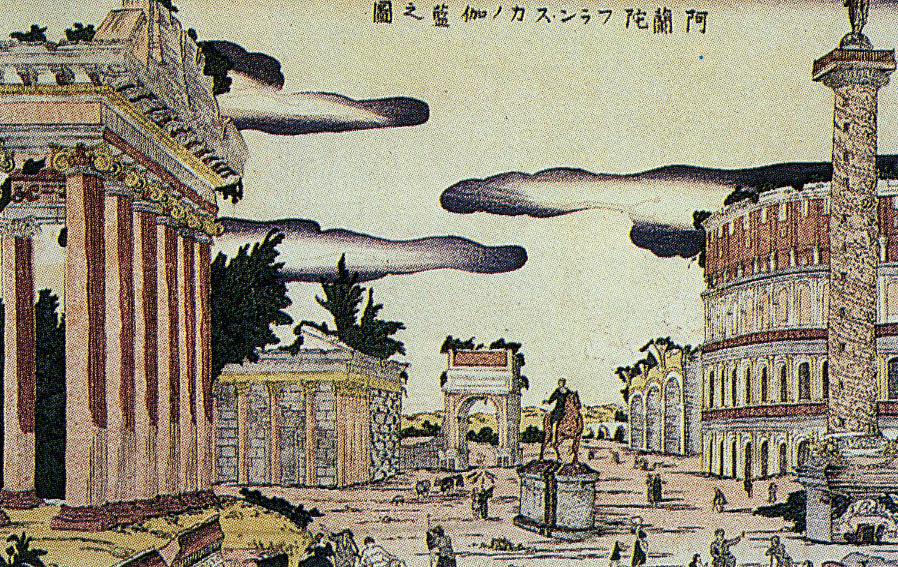 I learn from Wikipedia that the artist was Utagawa Toyoharu (d. 1814), and is based on an 18th century western print of various monuments of Rome.  It belongs to the Edo period, when Japan was closed to westerners.

I found two 19th century postcards, taken from the Palatine, looking towards the Colosseum, at this site, which also includes many other interesting images.

Note how the Basilica of Maxentius is enclosed in some now demolished building! 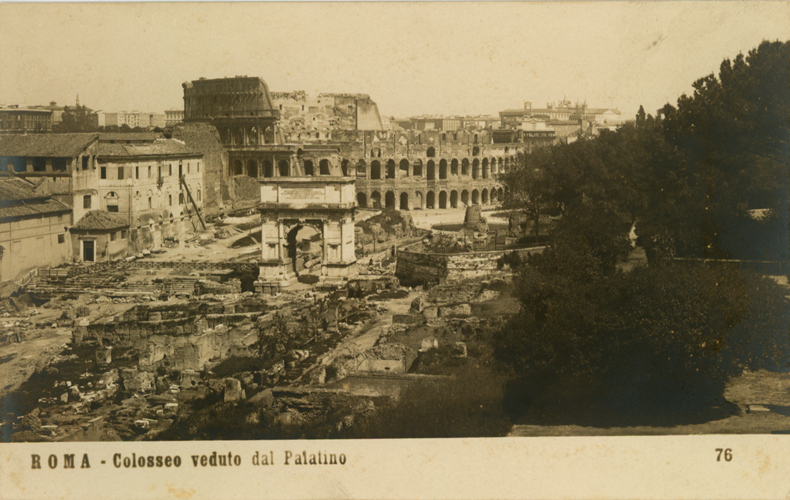 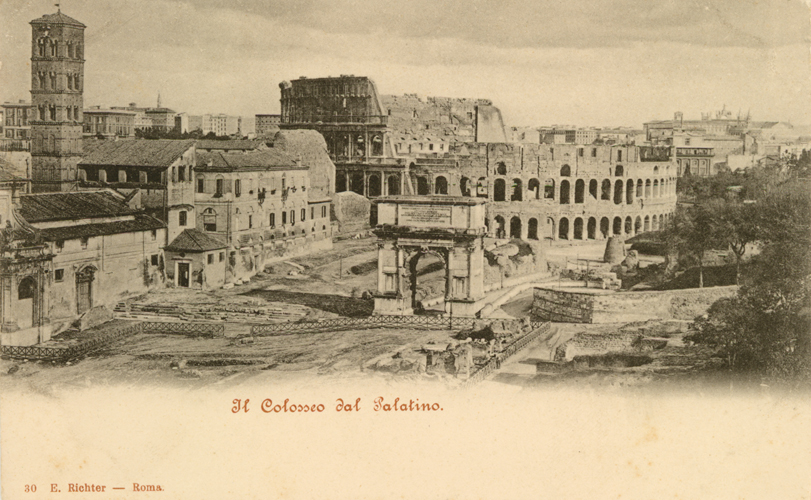 I came across an image on Twitter which shows the Colosseum, but also the ruined fountain that used to stand next to it, the Meta Sudans.  Here it is (click to enlarge): 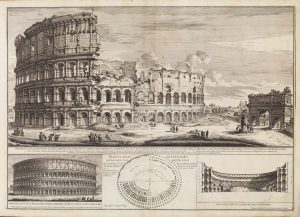 The tweeter had found it online “somewhere”.  Fortunately it is not too hard to locate: this is Prospetto dell’anfiteatro Flavio … detto volgarmente il Colosseo, 1703, by Alessandro Specchi (1668-1729).[1]  There is even a page about it here at the University of Munich, complete with an image, although, infuriatingly, a low-quality one.

I was unable to locate online any quality image, so this is about as good as it gets for the Meta Sudans (obtained by zooming my browser at this site): 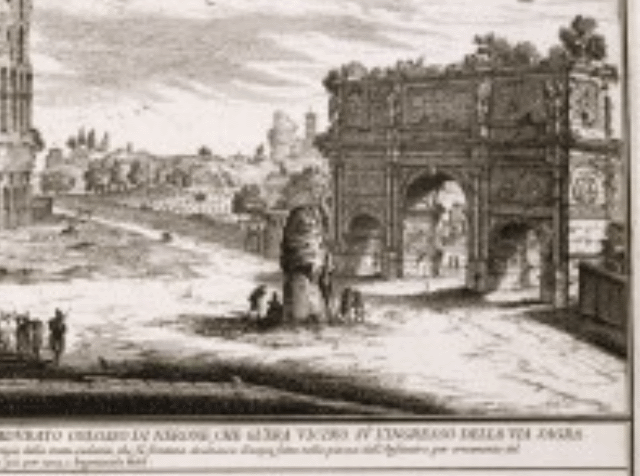 It clearly shows the Meta Sudans at twice the height that we see in photographs from the 19th century.  The upper section must have become very ruinous, and been demolished.  No doubt some Italian source could tell us when and why this happened; but such knowledge has not reached me.

Delightful to see another picture of this vanished monument, all the same.

The first of these was posted by Ste Trombetti, and shows the Arch of Titus in 1848 (!).  The photo is in the Getty archive, and was taken by Count Jean-François-Charles-André Flachéron (French, 1813-1883).  Through the arch, the Meta Sudans is visible, in its truncated 19th century state.

The next item is a photograph which was found by searching on “Collina della Velia”, i.e. the little Velian hill.  This hill was completely levelled by Mussolini, in building the Via del Foro Imperiali.  This old photograph shows the black base of the Colossus of Nero, which existed until Mussolini removed it.  The black item below the Colosseum is the base.

I found it on Flickr here. Here it is:

Finally let’s include an aerial view of the whole region, from a 2009 exhibition here.  Click on it to get a very large photo!

There seem to be very few photographs of this obscure item. 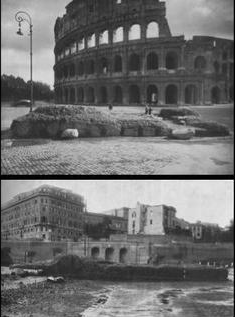 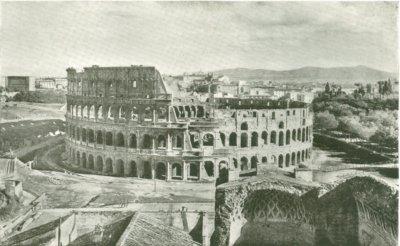 Ste. Trombetti has been busily searching the online site of the Spanish National Library, and posting the results on Twitter.

First of these is a view of the Septizonium, the vanished facade of the Palatine, built by Severus at the end of the Appian Way and demolished in the 16th century for materials to build New St Peter’s basilica.  This shot is particularly valuable, as it is more or less end-on, from the south, and shows the main structure consisted of two parallel walls, connected at intervals, with the facade on the front.  It can be found here (click to enlarge):

Next up is an old photograph of the Colosseum, with a particularly nice image of the Meta Sudans, the fountain just inside the arch of Constantine.  Its from here:

A detail shows the fountain clearly: 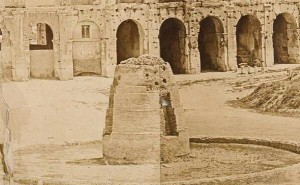 The same view is shown in an older drawing by Isidro Velazquez, made between 1792-96.  Note that in this drawing the Meta Sudans is perceptibly taller, and appears to have a second stage atop the first.  It’s from here:

Another image from the same period is an anonymous Spanish painting, “Anfiteatro Flavio, detto il Coloseo”, 1790-99.  Here too the Meta Sudans appears taller, and with a bulbous top.  From here:

Very interesting to see and compare!