Cyril of Alexandria wrote an extensive Commentary on John in twelve books.  It is not entirely preserved.  Books seven and eight have not reached us, although a few quotations survive in the medieval bible commentaries known as the catenas.

The commentary tends to be less well-known than other patristic commentaries.  The doubtful reputation of Cyril in the west, deriving from Gibbon’s Decline and Fall, ensured that the editors of the 19th century Nicene and Post-Nicene Fathers collection omitted his works.

A correspondent writes to ask why he can’t find the text for this Latin passage, taken from this 1618 edition of Bucer, De gubernatione ecclesiae (p.50), in any modern version of Cyril of Alexandria’s Commentary on John:

On this matter confirmation is at once brought forward from two testimonies from the Gospel of John, and Cyril therefore saying, “In fact great reproach was expressed among the Jews, if someone was expelled from the synagogue.  For just as today murderers, or adulterers, or parties to other capital crimes are expelled from the church: so at that time confessors to Christ were thrown out from the synagogue of the Jews.”

Likewise Baronius in his Annales on p.398 also quotes it here like this: 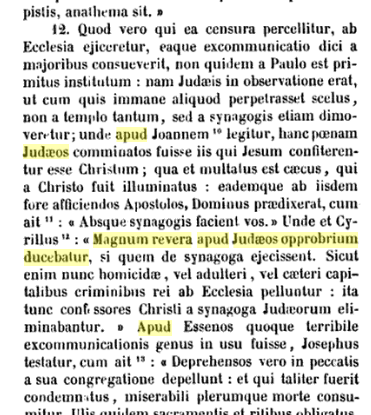 This is an example of a curious feature of the early printed editions of Cyril.  We can see this in the 1520 edition (online here), which is a reprint of the 1508 first edition.  If we look at the 1520 text, it is notably different, and shorter, from that found in the parallel Greek and Latin edition of 1638 (online here).

Our passage is found in the 1520 in book 6 of Cyril’s commentary. It appears on p.242, in chapter 20.  The context is the man born blind whom Jesus healed on the Sabbath.  The pharisees cross-examined him about this.  It did not go well.

30 The man answered, “Why, this is an amazing thing! You do not know where he comes from, and yet he opened my eyes. 31 We know that God does not listen to sinners, but if anyone is a worshiper of God and does his will, God listens to him. 32 Never since the world began has it been heard that anyone opened the eyes of a man born blind. 33 If this man were not from God, he could do nothing.” 34 They answered him, “You were born in utter sin, and would you teach us?” And they cast him out. (ESV) 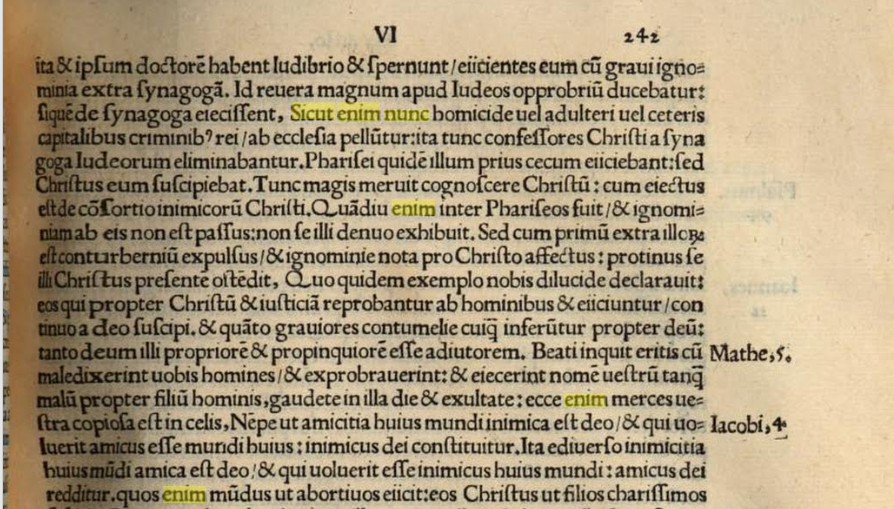 If we look at the start of the volume, we find that the man who made the Latin translation was George Trapezuntius – literally “George from Trebizond”.  He was one of the circle of young Greek exiles around Cardinal Bessarion.

And here again learn that what was done is typical of a true event: for that the people of Israel were going to utterly loathe the Gentiles as nurtured in sins from erroneous prejudice, any one can recognise from what the Pharisees said to that man. And they expel him, exactly as they who plead the doctrine of Christ are expelled and cast out by the Jews.

The last phrase “exactly as…” corresponds to “ita tunc confessores…”.  But the bit before doesn’t.

Well, what do we make of this?

We all know that Gutenberg devised a way to do printing ca. 1450.  This pretty much killed off the hand-copying of books, as prices fell to 20% of what they had been, and kept falling.  But printing Greek was another matter altogether. The heavily abbreviated and ligatured medieval Greek minuscules were simply a nightmare to reproduce using moveable type.  Greek manuscripts continued to be copied, often by Byzantine exiles in Venice, well into the 16th century.  Nor was the knowledge of Greek in the west nearly as widespread as that of Latin.

In consequence most Greek texts were first published in translation, in Latin.  This translation was itself often made by a Greek exile, such as those who clustered around Cardinal Bessarion.  When it was actually possible to print the Greek, it was sometimes the case that the older Latin translation did not fit with the Greek.  Perhaps it had been made from a different version of the text.

In this case, the Latin “translation” is not what the Greek has to say.  Did George of Trebizond get it wrong?

The strange answer is to be found  in a 1988 article about the use of Cyril by Erasmus in his Annotationes on John.[1]  This tells us:

The first printed edition of the Commentarium on John was the Latin translation made by George Trapezuntius before 1486, published by Josse Clichtove and printed by Wolfgang Hopyl at Paris in 1508.   But Trapezuntius had known only the first and last thirds of the Commentarium; Books 5-8, covering John, 7, 25-12, 48, were lost and hence not represented in his translation. Clichtove reports in his preface that these books are missing not only in the manuscript he used for his edition but also in three Latin and two Greek manuscripts in the library.

In a reissue of the 1508 edition made in 1513-1514, Clichtove and Hopyl inserted between the end of Cyril’s Book 4 and the beginning of his Book 9 Clichtove’s own supplement of the missing books, numbered 5-8 and composed largely from the Homilies on John by Chrysostom and the Tractates on John by Augustine. The supplement had its own preface describing what Clichtove had done and its own pagination, but in all other respects the edition was identical to that of 1508. It was the supplemented edition that was revised and reprinted in 1520, this time with new title page, colophon, and pagination.

What an extraordinary proceeding!  The publisher composed his own “books 5-8”, and sold them embedded in the old translation by George Trapezuntius!  The “preface” on p.104 of the 1520 edition is hardly visible as such, and the spurious material is clearly labelled as Cyril in the running headers at the top of the page.

Based upon this misleading edition, Erasmus then quoted the material.  From Erasmus it passed into other literature of the period, including Baronius’ Annales (p.398 in this late reprint).

It’s a very interesting discovery, and a warning when dealing with old editions.

(My thanks to our correspondent, who looked up all the old editions and references which I have made use of above).