Among the monuments of Mithras is CIMRM 584, a relief showing the tauroctony, Mithras killing the bull.  It was probably found in Rome, but is today in Venice, as part of the Zulian bequest.  I came across a photograph online, and added it to the catalogue of Mithraic monuments.

While googling, I found another photograph at Wikimedia commons here, taken by some visitor to the museum.  But on the page was this extraordinary claim: 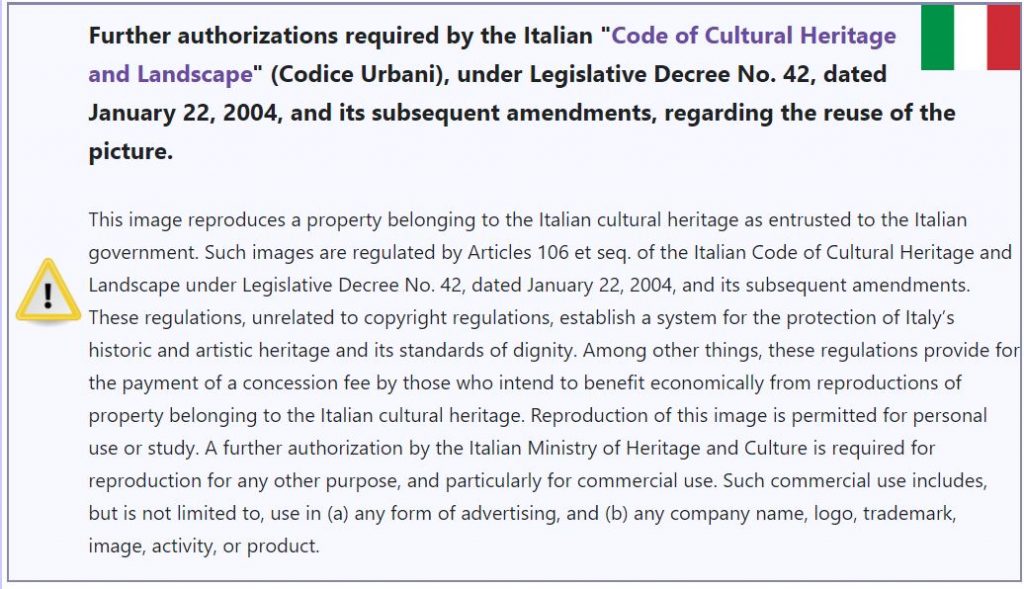 This image reproduces a property belonging to the Italian cultural heritage as entrusted to the Italian government. Such images are regulated by Articles 106 et seq. of the Italian Code of Cultural Heritage and Landscape under Legislative Decree No. 42, dated January 22, 2004, and its subsequent amendments. These regulations, unrelated to copyright regulations, establish a system for the protection of Italy’s historic and artistic heritage and its standards of dignity. Among other things, these regulations provide for the payment of a concession fee by those who intend to benefit economically from reproductions of property belonging to the Italian cultural heritage. Reproduction of this image is permitted for personal use or study. A further authorization by the Italian Ministry of Heritage and Culture is required for reproduction for any other purpose, and particularly for commercial use. Such commercial use includes, but is not limited to, use in (a) any form of advertising, and (b) any company name, logo, trademark, image, activity, or product.

It is quite extraordinary stuff.  An ancient Roman carves a relief; a modern man takes a snap of it with a digital camera; and somehow the officialdom of the modern Italian state (created 1870) must receive a fee?  How nice for them.

In practice, I am sure, this is largely ignored.  One feature of corrupt states is that they pass endless oppressive laws that are only enforced when some powerful or greedy individual chooses.  In this way the police can always find an excuse to arrest someone, because everyone is per force guilty of something.  In practice it impoverishes everyone.

So the next time you go to Italy and take a photograph of the forum, remember this curious edict.  Whether you abide by it, of course, is another matter.

Techdirt today have published an article making the extraordinary claim that one of the world’s leading music publishers has fraudulently collected hundreds of millions of dollars in royalties for the song, “Happy Birthday”, when – they say – it is in fact out of copyright:

Lawsuit Filed To Prove Happy Birthday Is In The Public Domain; Demands Warner Pay Back Millions Of License Fees

Happy Birthday remains the most profitable song ever. Every year, it is the song that earns the highest royalty rates, sent to Warner/Chappell Music (which makes millions per year from “licensing” the song).  However, as we’ve been pointing out for years, the song is almost certainly in the public domain. Robert Brauneis did some fantastic work a few years ago laying out why the song’s copyright clearly expired many years ago, even as Warner/Chappell pretends otherwise. …

The issue, as we’ve noted, is that it’s just not cost effective for anyone to actually stand up and challenge Warner Music, who has strong financial incentive to pretend the copyright is still valid. Well, apparently, someone is pissed off enough to try. The creatively named Good Morning to You Productions, a documentary film company planning a film about the song Happy Birthday, has now filed a lawsuit concerning the copyright of Happy Birthday and are seeking to force Warner/Chappell to return the millions of dollars it has collected over the years. That’s going to make this an interesting case.

I don’t pretend to know the rights and wrongs of the case.   The accusation, that Warner’s knew that the song was out of copyright, will take some proving.  What they may well achieve is to show that it is out of copyright.

The main impressions, that I take away from all of this, are two-fold.

Firstly, it is pretty plain that the law is infernally complicated.  How could such a lawsuit be possible, if the law were clear, simple and obvious?  How could there be any doubt, one way or the other?

Secondly, it is also plain that the time-limits on copyright have become absurdly extended.  All those involved in the production of this song are long dead.   I don’t suppose Jack Warner – himself dead – was born when the song was composed.  How is it in the public interest for the rights to exploit a 19th century song to be the property of an unrelated corporation  in the 21st century?

Copyright is not a moral right.  It did not exist for the majority of the history of mankind.  It was found to be in the interest of society that those who turned an idea into a physical product should be able to obtain monetary reward from it.  In consequence, in the 18th century, a copyright of a couple of decades was brought into existence.[1]  Nobody objects to this.  But a whole industry has grown up, subverting the principle in the interests of the publishing industry.

The case will be an interesting one.