The third century Antonine emperor M. Aurelius Antoninus, also known as Varius Bassianus, is universally called “Elagabalus” in modern scholarly literature in English.  Yet 19th century literature calls him “Heliogabalus”, and I see that French literature is less inclined to Elagabalus than English.  So… why the change?

The cause of the change appears to be the 1911 book The Amazing Emperor Heliogabalus, by J.S.Hay (online here).  In the preface (xi-xii) we read this extraordinary effusion:

After the Proclamation, I have preferred to call the Emperor by his official name, Marcus Aurelius Antoninus, or Antonine for short, as this is the only manner in which the coins, inscriptions, and documents describe him. After his death, it seems allowable to give him the nickname which his relations and later biographers have applied to him, namely, the latinised form of the name of his God. I have nowhere adopted the later Greek spelling or adaptation, Heliogabalus, either when referring to the God of the Emesans or to the Emperor himself. The only form in which the name occurs in inscriptions is in describing the Emperor as “Priest of Elagabal” or the Sun. Lampridius certainly Hellenised its form a century later, on what grounds is by no means clear, when one realises that neither the boy nor his God had any trace of Greek blood, tradition, or philosophy about them, … It is further unnecessary to drag in the Hellenised form of the Emperor’s name in order to pander to a popular and erroneous conception of the reign, which conception this book is designed to combat and generally offend. Heliogabalus is nevertheless the sole title by which this Emperor is known to the world at large, in consequence of which I have allowed the name to stand on the title-page, chiefly in order that Mrs. Grundy’s prurient mind may know, before she buys or borrows this volume, that it is the record of a life at which she may expect to be shocked, though she will in all probability find herself yawning before the middle of the introductory chapter.

The author’s smirking mockery of ordinary people may be a little strong for most of us to stomach.  But it is clear from his own words that he was a revisionist, determined to impose some novelty on the rest of us.  This should put us on our guard.

If we may believe Mr Hay, the emperor was never known as either Elagabalus or Heliogabalus during his lifetime.  No coin or inscription records this.  Furthermore every single Latin source that mentions him gives his name as Heliogabalus.  This is, of course, a graecised name – Helios rather than Sol – but that is what the Latin writers call him.

Our source for his reign is “Lampridius”, that is the life in the Historia Augusta.[1]  The translation portion may be found in two halves in English at Lacus Curtius, here and here; unfortunately the translator kindly renders “heliogabalus” as “elagabalus”, which is naughty.  Here’s the opening, which I have corrected:

Now when Macrinus had been slain and also his son Diadumenianus, who had been given an equal share of the power and also the name Antoninus, the imperial office was bestowed upon Varius Heliogabalus, solely because he was reputed to be the son of Bassianus.  As a matter of fact, he was the priest of Heliogabalus (sometimes called Jupiter, or the Sun), and had merely assumed the name Antoninus in order to prove his descent or else because he had learned that this name was so dear to mankind that for its sake even the parricide Bassianus had been greatly beloved.  Originally, he had the name Varius, but later he was called Heliogabalus because he was priest of this god — whom he afterwards brought with him from Syria to Rome, founding a temple for him on the site of an earlier shrine of Orcus. Finally, when he received the imperial power, he took the name Antoninus and was the last of the Antonines to rule the Roman Empire.

From this we learn that the word – whatever it is, Heliogabalus or Elagabalus – is the name of the god as well as the emperor.

This coin of Elagabalus is interesting in this respect.[2]  It is an aureus from the Antioch mint, struck in 218-219 AD. 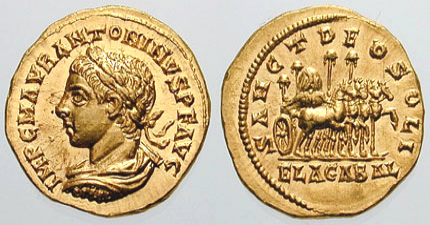 The obverse reads IMP[ERATOR] C M AVR[ELIUS] ANTONINVS P F AVG[USTUS]. The reverse reads SANCT[O] DEO SOLI and then ELAGABAL, and shows the black stone of Emesa – the idol of the god – in a solar chariot.  (El Gabal was the Baal of Emesa).

The text reads “To the holy sun-god Elagabal” (although surely an -o should finish the god’s name, unless it was considered indeclinable?)  SOL ELAGABAL is the name; in Greek Helios Gabalos, from which Heliogabalos.

So with this coin alone we have clear evidence as to the Latin form of the god’s name during the reign of Elagabalus.

If we follow the Historia Augusta and “Lampridius”, this was also the name of the emperor.  This, I imagine, is the reason why Hay’s alteration has been accepted generally.  But… it is a hypothesis.  It consists of accepting one part of the testimony of the HA – the statement that the god’s name was the same as that given to the emperor in mockery after his death – and then presuming that the use of “Heliogabalus” throughout is therefore a mistake of some kind.

The Historia Augusta is a strange work anyway.  Supposedly the work of six authors, it has been shown conclusively that it was in fact the work of a single author in the late 4th century.  Some of it is based on excellent sources; other parts are pure fiction, notably the lives of the usurpers.  One might hypothesise that the author was using a Greek account, perhaps, which therefore referred to the god and his minion as Heliogabalus.  (The weird name “Gabal” might not be recognised).

I see the logic that Hay employs.  All the same… if that is the case, then I am not sure that the case is made.  Did the emperor even speak Latin?  Did he speak Greek a lot, perhaps?  What word did he use, talking of his god? We have no way of knowing whether the Romans, jeering at Heliogabalus would use the Latin form that Hay hypothesises.  Possibly the emperor often spoke Greek and the Romans repeated the alien word in their jeering?

We cannot know what the word was that the Romans spoke, jeering at the dead freak emperor.  But we do know that the Historia Augusta says “Heliogabalus”.  Surely we should have stuck with what we know?

But since the modern scholarly literature uses Elagabalus, we had better stick to that.

There are only four literary texts that mention the Taurobolium.  I’ve already posted translations of the relevant passage from the Peristephanon of Prudentius, and the anonymous carmen adversus paganos.  The other mentions are in Firmicus Maternus and the the Augustan History, under Heliogabalus.  A look in Clauss-Slaby’s database of inscriptions reveals a lot of people and altars that have undergone the rite too.

The Vita Heliogabali 7 online at Lacus Curtius gives this mention.

7. He also adopted the worship of the Great Mother and celebrated the rite of the taurobolium; and he carried off her image and the sacred objects which are kept hidden in a secret place. 2. He would toss his head to and fro among the castrated devotees of the goddess, and he infibulated himself, and did all that the eunuch-priests are wont to do;35 and the image of the goddess which he carried off he placed in the sanctuary of his god.