Last weekend I visited Ickworth House in Suffolk, the family home of the Marquess of Bristol.  An earlier Lord Bristol travelled to Italy on the Grand Tour, and brought back with him a taste for Italian architecture: and the curious structure of the house reflects this.  There is a huge central rotunda, with the entrance, family rooms, servants quarters and bedrooms, with two much smaller wings.  One of the latter was never finished, indeed.

The property is now in the hands of the National Trust, and I can recommend the baked potatoes in their café.

But while touring the house, I discovered the “Pompeian room”. This has nothing to do with Pompeii, but rather with a curious discovery in Rome in 1777, in the area where Termini, the train station, now stands.

In 1777 that area was part of a large farm within the walls, running from the Baths of Diocletian for two miles, to the city walls.  The farm was then known as the Villa Negroni, as it was the property of Cardinal Negroni.  Originally the farm was known as the Villa Peretti, or Villa Montalto, after the family names of Pope Sixtus V, who had bought the land while still a cardinal.  Later still it was to be known as the Villa Massimo, after yet another owner, before the railway station was built in the 1860s.  There were two houses on the land, the main one facing the Baths of Diocletian.

In 1777 Lord Bristol was in Rome.  In the summer of that year, there was a remarkable discovery at the Villa Negroni.  The remains of an ancient house were uncovered, dating to the Antonine period, with rich painted wall decorations.  His Lordship went to view them, and was so impressed that he purchased the frescoes from the walls, ordering his agent to ship them to his house in Ireland.

The artwork excited great admiration.  A then famous artist was commissioned to make copies of the paintings, to ensure preservation, and a volume of 8 plates was produced.  Here are a couple of the plates: 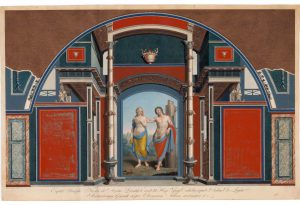 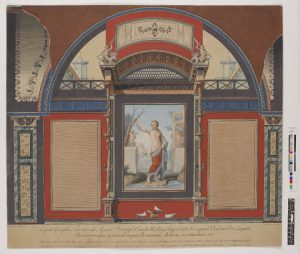 Lord Bristol was unfortunate.  The frescoes never arrived.  In fact they were not seen again.  All that he got was a set of engravings, made a year later in 1778.  A century later, at Ickworth, a later Marquess ordered that a room should be created in which they could be displayed; and, in the absence of the originals, that copies should be painted from the printed versions.

It was these, then, that made up the Pompeian room at Ickworth; and a set of the prints, at about A2 size, was visible in a corner.

I had never heard of these paintings, and I doubt that I am alone.  So in the next couple of posts, let’s see what we can discover about this discovery, and the pictures that so impressed contempories.