Here’s a fun item!  Inside the binding of a book, somebody found a really early fragment of a manuscript of Bede’s De ratione temporum.  (This is the only work which mentions “Eostre”, and includes all his calculations of dates and events.)

Even more fun – it’s online in a nice high-resolution image at Darmstadt!  It can be found here, where it is manuscript 4262.  The piece originates at Wearmouth – i.e. in Bede’s own monastery – around 725, in his own lifetime.

It’s amazing to consider that Bede may have seen this being copied!

But there is more.  This is a chunk of chapter 27, De magnitudine, vel defectu solis et lunae, as you may verify from this old edition here.  In this passage, he quotes Pliny the Elder book 37.  You can see the red heading of Bede’s chapter in the left hand column; and the name of “Plinius” on the third line underneath.

Here’s one side of the folium: 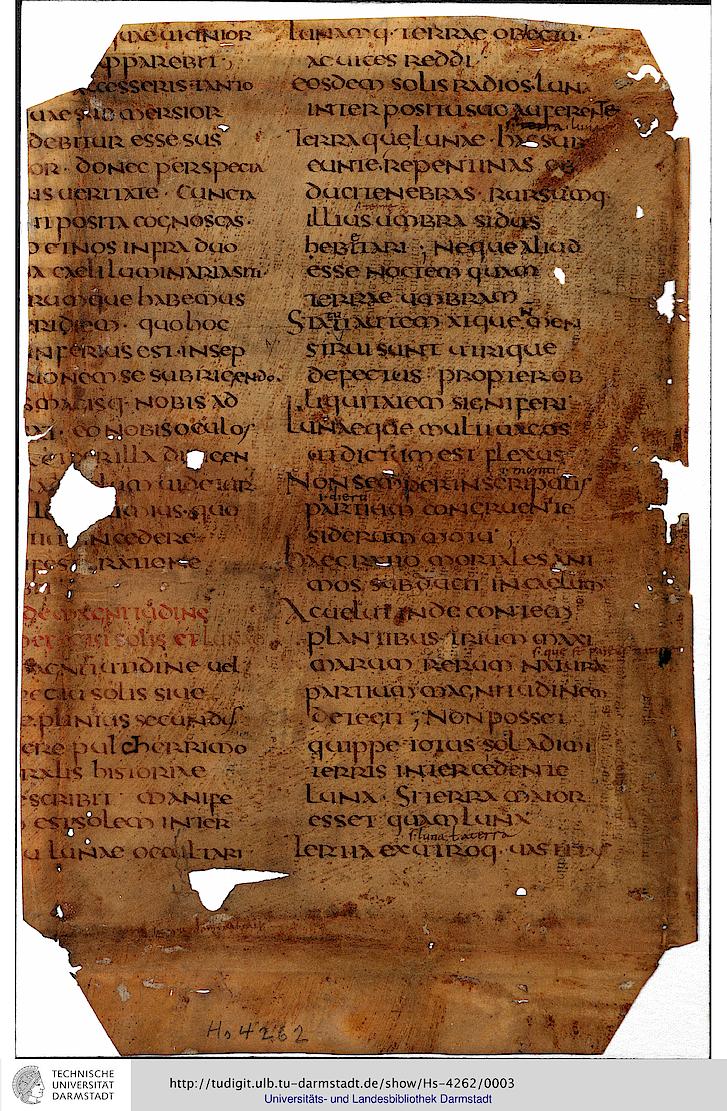 And here’s the other (which plainly needs a bit of work with a graphics tool): 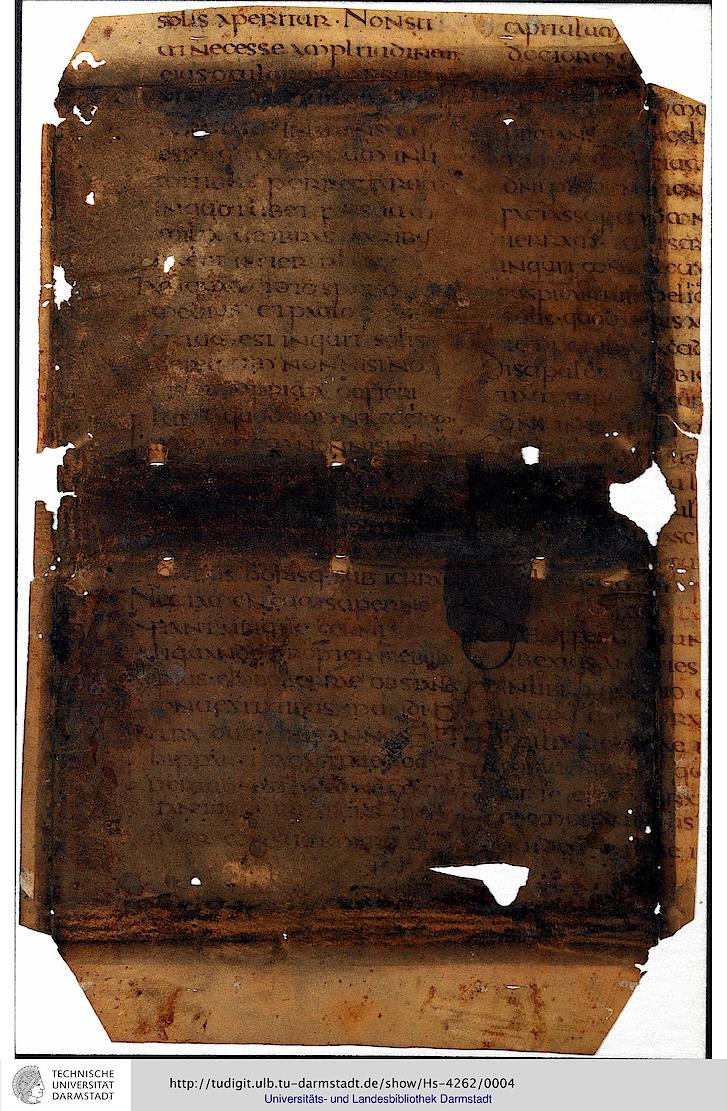 Here’s some of the Latin text:

The “eosdem solis radios luna” is particularly clear in the right-hand column, two lines down.

Here’s the same bit in the Liverpool University translation by Faith Wallis, p.78-79:

27. ON THE SIZE,OR ECLIPSE,OF THE SUN AND MOON
Pliny relates the following information concerning the size or eclipse of the Sun and Moon in that most delightful book, the Natural History: “It is obvious that the Sun is obscured by the intervention of the Moon, and the Moon by the interposition of the Earth, and each affects the other. The Moon takes away by its interposition the very same rays of the Sun which the Earth takes away from the Moon.”

Isn’t it amazing that a page of a copy contemporary with the author, and from the same monastery, is still extant?  It does demonstrate the importance of looking in these 16th century bindings.

Well done Darmstadt, for making that accessible online!  (They ask that I mention their reference of urn:nbn:de:tuda-tudigit-51806)

A useful post at the British Library blog here drew my attention to an interesting question: what did the bindings of ancient manuscripts look like?

We all know that ancient books in 1 AD were written on rolls of papyrus.  With these we are not concerned here.  Examples have reached us, notably the charred rolls from Herculaneum.

Notes for day-to-day use were written on wax tablets.  These consisted of wooden boards with a recess, filled with wax.  The notes could be written on the wax with a sharp point, and erased with the flattened area at the other end.  Examples have been found, often with much scratching on the wood!  One such example, now in the Louvre, is given here.

A natural development from this was to take a sheet of papyrus or parchment, and fold it in the middle, again to take notes.  This gives rise to the modern book-form or codex, which starts being used in the 1st century AD.

Such items are mentioned by Martial in his Epigrams, who tells the reader where his poems may be bought, written on these novel-sounding objects.  But most authors seem to have ignored this parvenu.  Snobbery is always a feature of the literary world, and it was perhaps used mainly by middle-class and business people.

One exception to this rule was the early Christians.  The municipal rubbish dump at Oxyrhynchus in Egypt has yielded immense amounts of papyrus fragments from ancient books; but analysis shows that the Christian texts tended to be written on a codex much earlier than non-Christian texts.  In this context, it is notable that the end of Mark’s gospel is lost, and plainly was lost very early indeed.  The end of a text, if it is written on a roll, tends to be well-preserved; but the last leaf of a codex can easily become detached, if the volume does not have a cover.  It has been suggested, therefore, that Mark’s gospel was originally written into a codex, and that the last leaf or two was lost, before almost any copies were made.

These early codices were unlike modern books in one respect.  They consisted of a single gathering or “quire”: you took a pile of sheets of papyrus, and folded them in the middle, and sewed a link in the centre of the fold to hold them together.  A modern example from here shows the problem nicely:

There is a maximum size to these items, and they quickly become very difficult to handle.  The solution was found in the 4th century AD, when the multi-quire codex went into general use.  Each quire was no more than 16 pages; and then the quires were sewn to each other to form a book of almost any length, and the binding attached.  A modern example again:

These very large codices come into use in the late 4th century AD, and of course remain in use today in modern hardback books.

The find of a collection of gnostic books at Nag Hammadi in Egypt in 1946 gave us a clear idea of what the ancient books of the early 4th century looked like (via here).  These were still single quire papyrus codices.

The British Library cover comes from a tax register written in 716-717.  It consists of limp leather, lined with papyrus.

Note that there is a flap: this would be covered with metal and used to keep the book closed.  It formed a catch, in effect.

The cover is decorated with ink, and, usefully, the British Library have enhanced a detail photograph to show it:

Let me say that, after attempting to enhance it further myself, I am full of respect for the skills of the chap who created that image!

Of course this is a fairly late example of an “ancient” binding, which happens to be that of a single-quire non-literary text.  But it is clear from the Nag Hammadi volumes that this is precisely the technology in use in the early 4th century, and no doubt earlier.  In which case, we may speculate that early – 1st century – copies of Mark’s gospel perhaps had covers of the same kind.