All Saints Day is celebrated on 1st November.  But it was not always so.  The first reference to this celebration on this date is a poem of 83 lines, in hexameter verse, preserved in the manuscripts under the title of “Martyrologium Bedae”, the Martyrology of Bede.  It cannot in fact be by Bede, because it mentions events after his death.  It may be an early work by Alcuin.  Dom André Wilmart labelled it the “Metrical Calendar of York”, and this name has stuck.  It is often abbreviated as MCY.

Few will be aware that there is in fact a critical edition, and English translation, hidden inside K. Karasawa, The Old English Metrical Calendar (Menologium), 2005, in appendix 2, p. 138-145.  The author very wisely edited and translated a whole bunch of texts related to his subject, one of which was MCY.  Since few will have access to this, and it is short, I thought that I would quote it here.  The apparatus can be found in the excellent printed version.  I have highlighted the couplet of interest to us.

(1 Jan) The first day of January is when the Lamb was circumcised.
(6) The sixth is worshipped because of the theophany of Christ.
(10) Paul, the first inhabitant of the desert, occupies the 10th.
(17) Similarly, Anthony obtains the 17th.
(20) Sebastian is said to have obtained the 20th.
(21) Because of merits conspicuous to the world, Agnes is commemorated on 21st,
(22) and through martyrdom Anastasius is commemorated on the 22nd.
(1 Feb) The first day of February is just when Polycarp suffered.
(2) A nd Christ was offered to the temple on the 2nd.
(5) We celebrate Agatha’s feast day on the 5th,
(14) and also Valentine’s is assigned to the 14th.
(16) And then Juliana decorates the 16th with honour,
(24) and also, Mathias deservedly made the 24th a holy day by his virtue.
(12 Mar) Here Gregory gilds the 12th of March.
(20) Cuthbert obtained the 20th,
(21) after whom St Benedict follows on the 21st.
(25) Christ’s conception rightly enjoys the 25th.
(23 Apr) And George was taken from hence and flew to the stars,
by overcoming executioners, on the 23rd.
(24) Ecgberht, shining with due praise for his virtue,
dutifully ascended starry Olympus on the 24th.
(24) On the same day, Wilfrid the Bishop reached heaven,
rejoicing in being borne by the angelic host through the delightful heights.
(29) And Wilfrid, on the 29th, went into the heavenly court,
following him in time, but second to none in the flower of his virtues.
(1 May) James, the pious servant of the Lord, and also Philip
are worshipped with great honour on the first of May.
(12) The innocent Pancras followed on the 12th.
(18) On the 18th, Mark deserved to rest.
(5 Jun) June, on its fifth day, worships Tatberht’s soul
taken away from the world and carried through the heavens.
(5) And on this same day, Boniface the mighty warrior,
victorious over his enemies, departed to heaven through martyrdom.
(10) (June) treats Barnabas in the same way on the 10th.
(19) Gervasius suffered on the 19th,
(19) as did Protasius, and both were summoned to the eternal kingdom.
(24) And John the Baptist is to be revered on the 24th,
on this feast of his beautiful birth, in the glory of his crown.
(26) And through martyrdom, Paul rejoices on the 26th, and so does John.
(29) The teachers Peter and Paul are associated (with each other) on the 29th,
illustrious men whom the world illuminates with the greatest honour.
(25 Jul) On July 25th, a happy day,
James, the brother of John, is celebrated in the usual way.
(30) Abdon and Sennen consecrate the 30th by venerating it.
(6 Aug) Appropriately, August has its sixth day as the feast of Sixtus.
(10) On the 10th, the victor Laurence overcomes enemies.
(15) The holy Mother of God, it is agreed, has her feast on the 15th,
the day on which the Virgin was carried to the angelic hosts.
(25) St Bartholomew is put on the 25th.
(29) On the 29th, the martyr, John the Baptist, is worshipped.
(8 Sept) The Blessed Virgin Mary gave honour to the 8th of September,
the day on which she was born.
(14) Cornelius then made the 14th holy,
(14) and did Cyprian in the appropriate order.
(16) The chaste Eufemia obtains the 16th.
(21) And the delightful teacher Matthew occupies the 21st.
(22) Maurice the martyr together with thousands (of others) obtains the 22nd.
(27) Cosmas is put on the 27th, along with Damian.
(29) The dedication of the Temple of Michael makes the 29th holy.
(30) And the good translator Jerome sparkles on the day before (the 1st of Oct).
(2 Oct) Bosa, who is venerated on earth, as he rejoices on the heights of Olympus,
wishes to have the 2nd of October solemn.
(3) And it falls to the twin Ewalds to be worshipped on the 3rd.
(10) The master Paulinus rightly marks out the 10th.
(18) Luke the teacher is to be remembered on the 18th.
(28) Let us pay reverence to Simon and Jude on the 28th.
(1 Nov) As a jewel worn on the brow sparkles time and again, so November
at its beginning is resplendent with the praise given to all the saints.
(11) Martin ascended above the stars on the 11th.
(17) Thecla finished her life on the 17th.
(22) Cecilia deservedly left for heaven with praise on the 22nd.
(23) We happily venerate Clement’s feast on the 23rd.
(24) Chrysogonus in his mighty armour rejoices on the 24th.
(30) Andrew is properly venerated round the world the day before (the 1st of Dec).
(20 Dec) On the 20th (of Dec), similarly, Ignatius departed.
(21) Thomas began to ascend to heaven on the 21st.
(25) The Lord was born from the immaculate Virgin on the 25th.
(26) Through martyrdom, Stephen sought his reward on the 26th.
(27) On the 27th, the evangelist reached heaven,
the innocent John, borne by the protection of the angels.
(28) Through martyrdom, thousands of infants were overthrown on the 28th.
(31) We celebrate the Reverend Silvester, who is to be honoured throughout the
world on the day before (the 1st of Jan).

The best introduction to the Metrical Calendar of York is undoubtedly by Michael Lapidge, “A tenth-century metrical calendar from Ramsey”, in: Revue Benedictine 94 (1984), 326-369, esp. 327-332.  The original text from York is extant in two manuscripts.  The text then crossed the channel and spread widely on the continent, losing references to local anglo-saxon saints, and acquiring new lines for saints in the new location.  There are many continental witnesses, all somewhat modified.  Unusually a version of the text then came back to England, and had further descendants here.

The various metrical calendars are a field of study of their own, and too much for a blog post.  But we can certainly look a little at the history of the text.

The original text is preserved in two manuscripts.  The first of these is British Library, Cotton Vespasian B. vi. (=V)  It dates a  little after 800 AD, and was written in Mercia.  Our text is on folios 104r-v.  This is in a group of 3 bifolia which were for some reason extracted from the main manuscript and are bound separately as B.VI/1.  They are online here.  This is the top of f.104r.

Unhappily the manuscript is defective at the start, beginning only on line 16 with “Bis senis sanctus….”.  (To the right of the text is a list of Roman and Greek numerals – nothing to do with our text).

The other manuscript is Trinity College Cambridge, O.2.24, fol. 87v-89r, (=Tr.) from the start of the 12th century.  It is not a copy of V, and it is complete.  It is online here, although I found that the manuscript images did not display on my Android phone.  But blessedly you can download a page that you are interested in:

In actual fact our text starts, without an incipit, on fol. 88r.  Each month has an initial.  The manuscript is far more handsome than the rough Dark Ages manuscript above.  It ends on fol. 89r, without any explicit.

Both manuscripts contain our verse.  They have, however, no mention of a verse commemorating John of Beverley which is preserved only in continental manuscripts, but is probably original.

The latest saint mentioned is Boniface, who was martyred by the pagan Friesians in 754.  The last bishop of York mentioned is Wilfrid II (d. 732), but not Ecgberht (d.766), which might suggest that he was still alive when the poem was written.  The manuscript V itself dates to soon after 800 AD.  Alcuin mentions All Saints Day on 1st November in a letter to Arno of Salzburg, dateable to early 800 AD,[1] suggesting that he was aware of such a date before he left for the continent in 782 AD.  These dates all suggest that the work was written between 754 and 766 AD.  Lapidge suggests that it may in fact be an early work by Alcuin himself.

The work is extant in various continental manuscripts, all interpolated.  For instance there is British Library Sloane 263, f. 22r, online here.  We can see that this has acquired an incipit: INCIPIT MARTYROLOGIUM BEDAE HEROICO CARMINE:

It has also acquired some introductory verses as a prologue to January from somewhere.

The Martyrologium Poeticum / Metrical Calendar of York was printed first by Luc D’Achery in 1671 from a manuscript of Reims transcribed by Mabillon.  This too has the spurious prologue.  The edition is online here. 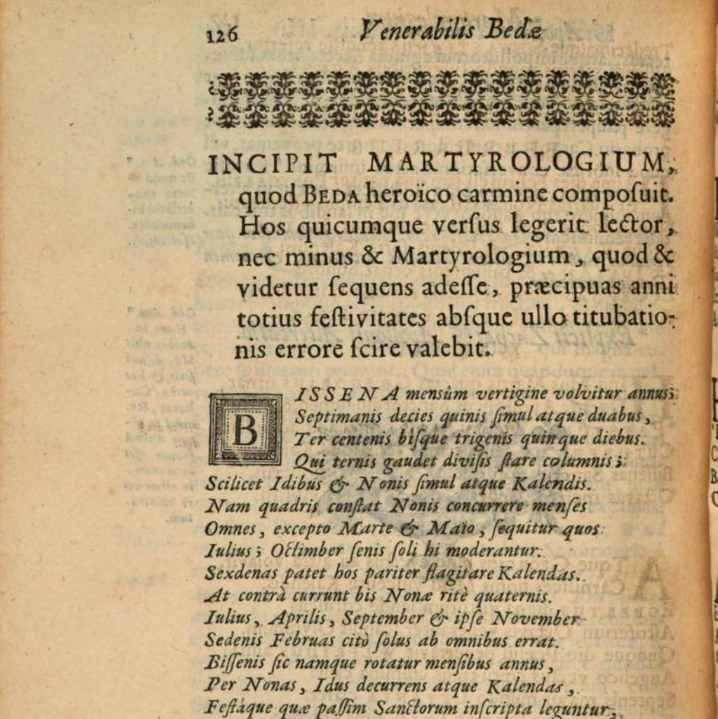 This is the text given by Migne in the Patrologia Latina 94, col. 603 (online here).

The authorship by Bede was first dismissed by Henri Quentin in Les martyrologes historiques du moyen ages, 1908, chapter 3, p.120 f., (online here) who also gave an edition of the text.

André Wilmart, “Un témoin anglo-saxon du calendrier métrique d’York”, Revue Bénédictine 46, 1934, p.41-69 established the English origin and gave an edition based on V.  But we had to wait until 2005 and the edition of Karasawa for a proper edition and translation.

The importance of all this is that it establishes a date for the celebration of All Saints Day in the middle of the 8th century, nearly 50 years earlier than Alcuin.  It also establishes that this date is likely to be of anglo-saxon origin.

I have spent a few days, researching the Martyrologium Poeticum of pseudo-Bede.

This work would ordinarily be a bit late for us.  Bede himself appears in the Clavis Patrum Latinorum, but the editors declined to include his dubia and spuria, doubtless realising that this would take them centuries into the middle ages.

The text is the first witness to All Saints’ Days – All Hallows Day – being celebrated on 1st November.  So it gets quoted in the literature.  I’ve been trying to find out about it, with this in mind.

However I noticed a funny thing, when I was looking through the papers.  There was nothing at all under this name for more than 50 years.  There were a cluster of papers by John Hennig in the 1920s and 30s, and a couple of French papers of the same era, and then nothing.  This made me suspicious.  Generally texts do not cease to be worked on entirely, after attracting interest for centuries.

But I have seen this before.  This evening my suspicion was confirmed – that the text is today known under a different title.  No longer do we study the Martyrologium Poeticum; instead it is the Metrical Calendar of York, or even simply MCY!

The text with an English translation has been edited by Kazutomo Karasawa in The Old English Metrical Calendar (Menologium), Cambridge, 2015, in Appendix 2 (p.138), as one of a number of related texts that Dr. K. included in his edition.

It’s very bad practice to do something like this, without better reason than I have yet to see.  I nearly wrote an article, entirely based on the older literature.  I am not the only one to be misled.

I shall have to write something with a bibliography about all this, and I do need to read the articles by Michael Lapidge that list the manuscripts.  But that can wait to another time.