The Anglandicus blog has an amusing 2014 article on Massive Scribal Hangovers: One Ninth Century Confession.  The whole post is well worth a read on Irish marginal notes in manuscripts.

One such manuscript has a great number of these marginalia.  Below is the upper portion of folio 204 in St. Gall 904 (or Codex Sangallensis 204, if we choose to be formal).  This was written in Ireland in 851 AD.  It contains a copy of Priscian’s Institutiones Grammaticae, a rather dry text.  The manuscript is online here; folio 204 is here.

At the top, where I have drawn a red box, is an Ogham marginal note.  This gives us a single word in Old Irish and reads simply “Latheirt“.  The meaning of this is given to us by an old Irish dictionary, Sanas Cormaic (Cormac’s glossary), itself perhaps composed in the 9th century.  An English translation of this is online at Archive.org here, and our word is on page 102. 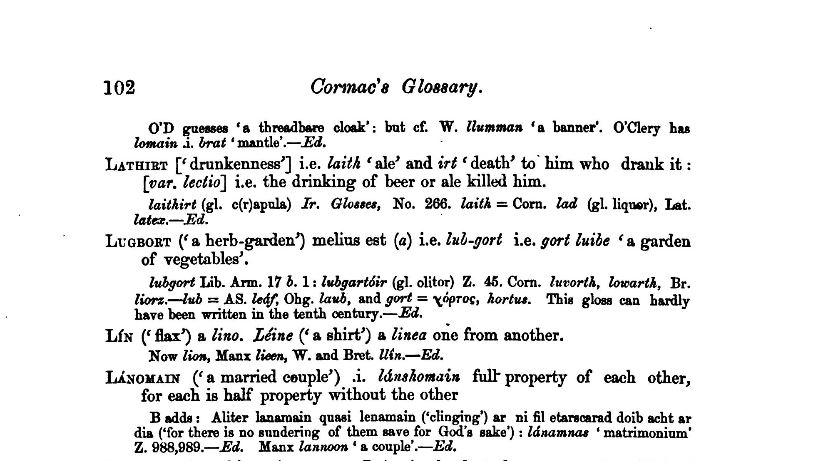 This tells us that Lait(h) = Ale, the stuff consumed copiously in Northern society at this season, plus Irt = killed.  So Latheirt means “ale-killed”, ale has killed us.  The rather unimaginative translator adds that the Latin meaning is crapula, or “drunkenness”.

In short, our scribe has a massive hangover.  It is unlikely that this was assisting his perusal of Priscian.

The Anglandicus blog seems to be only occasionally updated, but is well worth looking at.  The importance of the Irish monks to the dissemination of ancient texts in Europe can hardly be overestimated, and such marginal notes take us directly to their state of mind while doing so.