A tweet this evening drew my attention to the fact that a search by author on Piranesi at the Spanish National Library produces heaps of results, available in very high quality and very large images.  I looked through these, and found a couple of gems.

First, an external view of St Peter’s: “Veduta dell’ Esterno della gran Basilica di S. Pietro in Vaticano”.  This is too large to display here, but it features the vanished 3rd century circular tomb, known as the chapel of St Andrew, which stood to the south of St Peter’s and was demolished in the 18th century.  I’ve made a detail picture, itself still very large:

I have also found the two images of the Colosseum and Arch of Constantine, which I dealt with yesterday, but in much higher resolution.  In fact it is only when you see the original detail, that you realise quite how special these pictures are.

But what I was most interested in was the vanished fountain, the Meta Sudans, visible in them.  Let’s remind ourselves of how this looked ca. 1900, a stubby thing of brick with the upper portion gone.

As a coin of Titus shows, it was originally tall, and slender:

So how did it look ca. 1800?  In the first Piranesi etching, “Veduta dell’Arco di Costantino, e dell’Anfiteatro Flavio detto il Colosseo”, accessible here, I have zoomed in on the Meta Sudans:

The second, “Veduta di Arco di Costantino”, online here,  shows the fountain from the other side through the Arch of Constantine.  Again I have extracted a detail:

It’s pretty obvious that at this time it stood much nearer to its original height.  We can see the point at which it was then chopped off, in a tidying-up exercise, losing two-thirds of its height in the process.

As we can see, by comparison with the massive stub in the 1900 photograph, this was a big monument!

The Meta Sudans is (by now) familiar to us in old photographs, as a Roman fountain extant as merely a brick stump outside the Arch of Constantine in Rome, which was demolished by Mussolini in the 1930’s.  But until the 19th century it was twice the height.  Ancient pictures on coins show a slender, pointed item.

Here is a drawing by Giovanni Battista Piranesi, 1760, of the Arch of Constantine, which I saw on Twitter here.  It is notable because we can see the Meta Sudans through one of the arches.

This seems to be an engraving called “Veduta dell’Arco di Costantino Magno”.  I learn from the British Museum site that it comes from a volume called “Le Antichità Romane”,[1] where it is Plate XXXVI, figure II of the first volume. It is a 1756 etching, apparently.

Here is another, also by Piranesi, from here:

This etching is labelled “Veduta dell’Arco di Constantino e dell’Anfiteatro detto il Colosseo”.  Sadly it is not clear to me whether this is part of a series, or how it should be referenced.  The Library of Congress make a high resolution image available here. 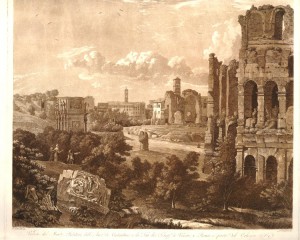 Let’s have a detail of the Meta Sudans: 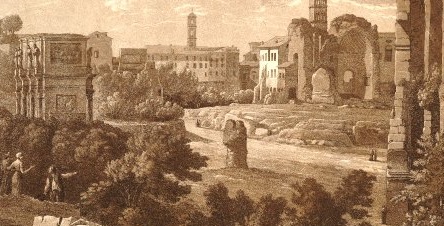 This was made between 1800-1820.  The more info we can find from before the partial demolition of the 19th century, the better.