My house is still being painted.  My books are still in 70 plastic crates in the garage.  But this weekend I’ve managed to sneak my laptop back into the house.  I’ve brought in the router and got my internet working again!

It is such a relief to be able to get online at home.  I can get online at work at my current client, but since I know that their office network is subject to repeated virus outbreaks, I don’t connect to my email there.

Here I am still surrounded by painter’s gear, and nearly everything still is packed up in boxes in my garage.  The smell of paint is everywhere.  The carpets are being taken up, and there is dust and dirt in all sorts of places.  Living in a building site is challenging, particularly when you have to wipe the paint off your taps, or your vacuum cleaner, where the painter has carelessly handled them.  It has become part of my routine every evening when I get home.

Also I’m finding that one thing leads to another.  What was originally just a job painting all the walls and ceilings and white woodwork is now going to involve replacing all the carpets.  Pulling up the carpets reveals damaged floorboards.  I’m trying to get a carpenter in, and deal with this.  My, these people are difficult to contact!

Meanwhile I decided that my original choice of replacement carpet colour – beige – would be depressing when it’s dark or raining, i.e. for 9 months of the year.  So I’m spending all my spare moments traipsing around carpet shops.  I would just buy the same type as I currently have;  but they do not make it any more.  You can only buy what they sell.

This leads me to wonder … will future archaeologists date our dwellings, not by types of non-existent pottery, but by types of polyester carpet?

So there’s no time for Thoughts on Antiquity.  But then, I am lucky.  If I was married, I’d have no time to do anything.

The most interesting thing today is a 1954 aerial photograph of the London Mithraeum, which was here.  Sadly it’s not that clear which bit is the temple. 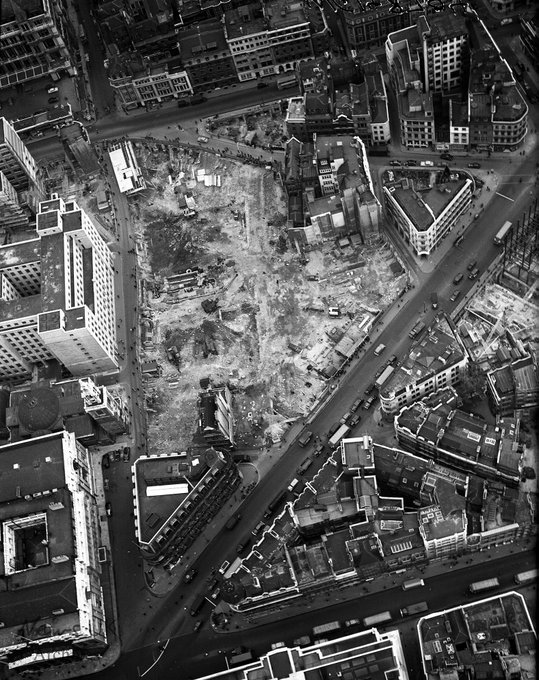 Not very exciting, perhaps… but as good as it gets!

I’ve been thinking again about ways to manage my books.  One item that I could happily dispense with is Bart Ehrman’s Forgery and Counterforgery, a big fat worthless book of which I reviewed bits some time back.   I wish someone would make a PDF of it; I’m  not sure that a Kindle download is quite as useful for reference purposes.

I’d also like to see the back of my Ancient Christian Writers series volumes.  I don’t have many, but they’d be far more useful in eBook form, and they would take up less space.  But I couldn’t see any sign that you can buy eBooks of them.

Basically if it is a translation of an ancient text, in the majority of cases, I don’t want it in paper form.

The four volumes of Cicero’s letters to Atticus, and to his friends are another – and I have no idea at all how to get an eBook of these, long out of print, volumes.  I’m not quite sure whether I will read through these again.  At the moment I am not in the mood; but I have done so several times in the past.

Maybe the answer is to find some young man with time on his hands who would sit in front of the scanner for a few hours, and create eBooks of some of my crucial books.  But where do I find this person?

Somehow, I must regain control of my book collection.

I’ve also been reading Lindsey Davis’ “Flavia Albia” books on my smartphone, via Kindle.  Davis is famous for the “Falco” series of Roman detective novels, set in the Flavian period.  The “Flavia Albia” series are “Son of Falco”; or rather, “Daughter of Falco”.  I bought the first three volumes on Kindle and read them, and they slipped down easily enough.

Recently volume 4 of this series appeared, and I bought it on paper; but in fact I would have been just as happy or happier with it on Kindle.  I don’t know that I shall read it again, so the paperback will go out to a charity shop.

Maybe one-time or two-time novels should be read electronically, rather than on paper?  But … what about our eyes?  Eyestrain is such a problem for smartphone users.

Today I broke off from my house-related chores, and took a restorative walk by the sea.  While doing so, I saw that a new information board had appeared there.  This referred to a building on the sea front, which was recently – within a year or two? – demolished, and was called the “long shelter”.  I always felt that it was an attractive building, and that it should have been repaired rather than demolished.

Well, the information board told me that the demolition took place in 2008!  Was it really 8 years ago?  How fast the years now fall, like leaves in autumn after the first frost.

I was reminded yesterday of “Thoughts on Antiquity”.  This was the blog, at http://neonostalgia.com/weblog/, on which I started blogging.  It was the blog of Chris Weimer, who invited me to write a few posts.  These I copied here long ago; and just as well, for his blog has pretty much vanished.  Looking at Archive.org, I see the last post was 24 May 2010.  The last snapshot to show it was on September 26, 2010, and the next snapshot, December 17 2010, shows only an HTTP 301 code.  I wonder what happened to it?  Indeed I wonder what happened to him?  I see that I have an email address … I must write and ask.

I’ve had a series of minor health problems for most of the year, although I don’t believe anything is really wrong.  On Tuesday I go into hospital as an outpatient for a somewhat unpleasant examination.  Wish me luck!