Here’s some stuff that’s wandered into my in-tray.

Google is becoming a useful tool for biblical quotations.  While checking some of these by googling, I found myself looking at archive.org at several volumes of the critical text of the Vetus Latina.  A search on Vetus Latina brings up quite a number here.  I hope that Archive have checked the copyright tho.

How people find the energy to scan books I do not know.  I’m sitting here with a volume of St Augustine, and having to pause for breaks.  I know that I did a lot of this ten or twenty years ago.  How on earth did I do it?

It’s been a while since I get out my Plustek Opticbook 3600, and I couldn’t remember if it worked with Windows 10 or not.  At first try it didn’t work.  Looking at the manufacturer site did not look good either.  But there was a Windows 8 driver, which I installed.  Still nothing.  Anyway I rechecked the cables and… um, the cable was half-unplugged at the scanner.  When pushed in firmly then it all worked.  I’m using it with Finereader 12 at the moment.

Next up is a photograph of one of the lost streets of Rome, the Via Bonella, from 1907.

I plucked from here this modern image: 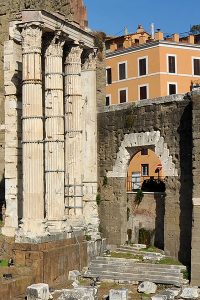 The columns are those of the forum of Nerva, to the left of the temple of Mars Ultor.  The modern street behind the arch, running left-right, is the Via Tor di Conti.  The orange building behind the arch is today the Forum Hotel, complete with a rooftop restaurant at which I had a terrible dining experience on my only visit to the building.

I do quite a bit of translating, so I was interested to come across an article, Translating for a Digital Archive.  This shows how the professionals do it, rather than people like me, alone in a room with a pile of dictionaries.  The project is to put British Library Arabic manuscripts online, and make the titles etc searchable in either Arabic or English.

As part of the BL’s [British Library] translation team, I work to produce and edit the Arabic language content for the QDL [Qatar Digital Library]. While the collection items themselves are displayed solely in their original language, all of the portal’s supporting and descriptive content is translated, as are the expert articles, meaning that the catalogue can be searched and used just as easily in Arabic as in English.

Like many large-scale translation projects, ours involves multiple translators, and several rounds of proofing and quality checks to ensure accuracy and consistency. To manage this, we use a piece of software called memoQ that includes two essential tools: a translation memory (TM) and a term base (TB). The TM functions as a bilingual database of previously translated segments of text; it works by storing pairs of original source-language content alongside its approved translation. When a new text is imported, memoQ breaks it into smaller segments on the basis of punctuation and line breaks, and automatically conducts a search for exact and partial matches. These are then presented to the translator for approval and/or review.

While a human expert still has the final say on whether to accept any suggestion from the TM, frequently only a minor edit is needed to make the old translation suitable for the new context. This serves the double purpose of saving time and maintaining consistency across the catalogue as a whole. Translation memories tend to prove their worth the larger they are and the more repetition there is in the content. Having grown over the years since the start of the project, our TM now routinely recognises a third of content in a new file, and often much more.

While the TM grows organically over time by compiling and storing translation segments, the term base is maintained manually. It works as a glossary for key terms, allowing us to suggest preferred equivalents for individual words or phrases, and/or to blacklist translations that should be avoided. As the TB is visible to all parties at all stages of translation and proofing, it helps to ensure the consistency of these terms in Arabic.

Authorities: making the most of memoQ

The TB has proved especially useful when it comes to translating authority files. An authority record serves to identify and describe a person, corporate body, family, place name, or subject term that is featured in a catalogue description. Each term is authorised and unique. As every record and every expert article on the QDL is linked to at least one authority file, they form an index through which users can search for all the content related to a specific term.

Read the whole thing.  I was unable to find an author’s name on it, curiously.

This idea of “Translation Memory Tools” sounded interesting to me.  I quickly found that several seem to be proprietary and expensive.  I did come across OmegaT, which is not, here.  But I suspect that none of my projects are large enough for me to use it.

Another interest of mine is hagiography, about which I know very little.  So I was interested to come across a seminar description (Seminar VII: Hagiography) at Lancaster University, with bibliography, and the following interesting introduction:

Hagiography, the historical genre which is the subject of this week’s seminar, comprises narratives concerned with the saints and their achievements, especially the miracles which God has performed through them and on their behalf. Six basic types of hagiographical ‘story’ or ‘scenario’ may be distinguished:

Miracula are typically concerned with the wonders that were performed after the saint has died and become a resident of the heavenly kingdom. A hagiographical text might well combine many of these stories or ‘scenarios’. Many vitae continue on, for example, well-beyond the scene of the saint’s death to describe how his or her corpse was lost, re-discovered and then brought and enshrined in the church where it now rests. In these texts the true climax comprises the saint’s translatio and enshrinement. Miracula, furthermore, were often combined to form libri miraculorum, ‘books of miracles’, which sometimes (but not usually) extended beyond the usual few dozen items to encompass hundreds of episodes.

In its various manifestations hagiography was the mode of historical discourse most frequently deployed in the Middle Ages, generating many thousands of vitae and miracula and contributing substantial passages to many chronicles and rhetorical histories. The similarities (and sometimes, the lengthy verbal affinities) between these narratives naturally lead to the suspicion that most, if not all, instances contain much that has been borrowed from earlier examples or which has been re-fashioned so as to resemble the scenes found in key archetypes—such as the late fourth-century Life of St Martin of Tours by Sulpicius Severus—which exerted great influence over the development of the genre. This conclusion seems inescapable; but the process might sometimes involve an oral phase, prior to the writing up of the legend, in which the hero’s story assimilated many standard elements or was gradually re-fashioned with each act of re-telling, bringing it ever closer to the recognised archetypes. The few texts which admit importing episodes from the lives of other saints invariably claim that the story was true of some saint if not of the saint with whom the text is chiefly concerned or that there is so little doubt about the subject’s sanctity that the mis-attribution of a few stories will scarcely make any difference to his or her cult. As such admissions show, hagiography’s claim to authority rested, as in the case of ecclesiastical history, on its claim to record actual events—actual moments of divine intervention in the world.

I’d like to know which texts include those admissions of borrowing material.  I wonder how one could find out.

That’s enough for now.  I find that I have 197 items in my backlog folder, so perhaps I should have a push on getting them out!