In the medieval manuscripts which transmit to us the text of Josephus Antiquities, each book is preceded by what looks to us like a table of contents.  These are present in the Loeb edition edited by Henry St. John Thackeray, who very properly includes and translates them, although they are at the back of each volume.

The books of this work were certainly subdivided in antiquity, because Cassiodorus refers to portions of the text by number in his Exposition on the Psalms, as I verified a post or two ago.  Polybius added tables of contents to his history, at least initially, as we learn from the introduction to book 11, and other writers followed.  Divisions of literature into numbered sections are found in papyri.  So it seems clear that the tables of contents in Josephus are ancient, and probably authorial or — since this is a work so much the work of secretaries — from the original team of authors and editors.

But Thackeray points out one piece of evidence that suggests otherwise.  In Niese’s edition, at the end of the table of contents / prographe for book 1 is a reference to the Chronicon of Eusebius. 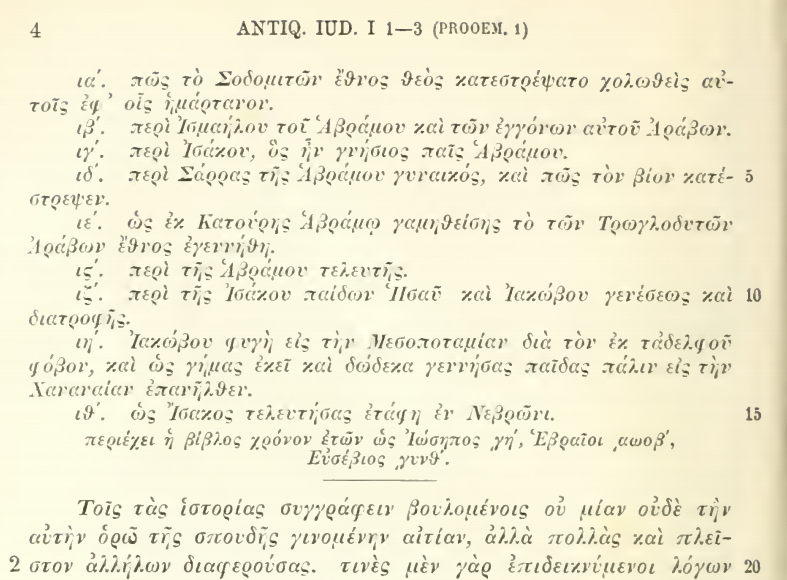 Of course that could not be a first century piece of text.  But Thackeray points out that it is not actually found in most of the manuscripts.  There is also an ancient Latin version of Antiquities, which also has these tables; and it is not found in there either.  Here is the apparatus from Niese, showing this:

This variation tends to suggest that this piece of text has a different textual history to the rest.  Perhaps we may surmise that it is a later addition.  No such details are found under the tables for other books.

There seems no real convincing reason to suppose that these titles are not part of the original book, and they should be printed as such.  Birt indeed opined that such tables were originally written on the outside of the roll, and Polybius confirms that copyists tended to ignore them.

These tables exist for some works where the text has been lost.  The prologoi of Pompeius Trogus exist, but the whole history by this contemporary of Livy has vanished apart from a 2nd century AD epitome by Justinus.  So these items had a life of their own, and might circulate by themselves.

Perhaps they were of service to booksellers also.  Is it possible to imagine these things being hung up on columns in the book-sellers’ shops?