Quite by chance I found myself looking at something that made me first rub my eyes and then burst out laughing.  I thought I would share it with you before it vanishes from the web.  From here:

The Bible was wrong. For evidence look to, well, the Bible.

Such is the conclusion of this stunning, provocative infographic, which maps contradictions in the Bible, from whether thou shalt not commit adultery down to the color of Jesus’s robes. Career skeptic Sam Harris commissioned the chart for his nonprofit foundation Project Reason, with graphic design by Madrid-based Andy Marlow. Whatever your religious views, it’s an incredible testament to the power of data visualization. It’s managed to make an ancient text — over which men have fought wars and women have sacrificed babies — look downright silly. 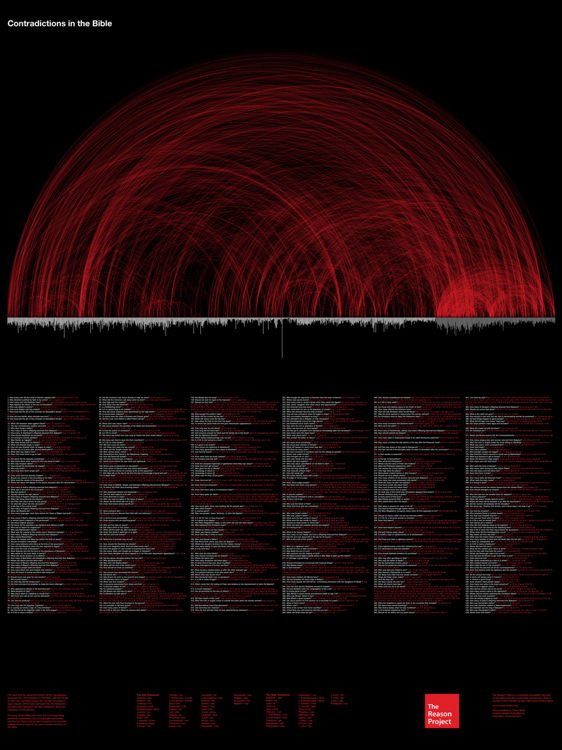 The organization here is pretty simple. You’ve got bars at the bottom representing the 1,189 verses of the King James Bible. White’s for the Old Testament, gray’s for the New Testament. Then a red arc links all the verses that contradict each other…. For the full key, download the chart as a PDF.

You’ve probably never heard of this Sam Harris, and I have never troubled to read anything he produces.  Those of his disciples that I have met have been very stupid people.

But back to the image, and let’s think about it critically.  What can it mean?  Someone draws a picture and that says, erm … what?  That a couple of atheists can compile a list of “bible difficulties” and represent it in graphical form?  Or that there are “bible difficulties”, as the Victorians used to quaintly call them?  There’s quite a bit of hubris in suggesting that what someone thinks is a problem, with something  he doesn’t want to believe, must really be one.

Mind you we should not be unfair.  Those exulting over this curious production seem to understand quite well that it is designed for emotional impact rather than intellectual impact.  But let’s have some fun!  Let’s see if we can actually get a sensible meaning out of this?

The lesser kind of atheist writers have been trying for some centuries to compile lists of “bible difficulties”. They would like us to believe that, if they can find or invent anything which looks like a contradiction, by whatever combination of ingenuity or wilful stupidity, in a library of books written over a period of several centuries and copied by hand — especially a numerical difference, and we all know how reliable is the copying of numerals in ancient texts –, then that proves … well, what?  They get quite hazy about what it proves, specifically, other than that “the bible is not true”.

But the logic is never quite laid out for us to inspect.  Is it some sort of unspecified theological point, about how divine inspiration ‘must’ work?  If so, do these sort of atheists believe they can make valid theological statements about a God in whom they do not believe?  Or perhaps is it that this text cannot be the work of an omnipotent God, working through human hands to give a message and accepting that those humans may make mistakes in copying or reading, because… erm… sorry why was that?  It’s as if the argument falls apart, just as soon as you recast it into your own words and omit the slogans.

To those who think of the crisp incisive prose of J.S.Mill when they think of atheism, this sort of argumentation will be a sad disappointment.

Intellectually — and we do “intellectual” on this blog, I think — the whole exercise of piling up “problems”, as a way to refute something, is rubbish.   It’s not going to tell you anything, and it will do injury to the person doing it, because it is unbalanced.  It is the favourite method of the hate-writer, and the process corrupts those who do it, as the “faults” of those they dislike grow larger and larger under the distorting lens of the microscope.  No sensible person looks for accurate information about wombles from www.iHateWomblesKillKillDieDieDie.com.

Consider the idea of a heap of “problems”, as applied to any ancient text or collection of texts.  Won’t any text of any length have “problems” of this kind?  Not because it’s, erm, whatever point they are trying make here, but because of how the world is.  People see things differently.  Typos creep in.  Cultural differences get misunderstood  by modern readers.  And so on and so on.  To make these  facts about the world into an argument against one kind of belief, while silently ignoring the same problem with every belief and everything we know, is rather silly.

I need to get back to proof correcting the Eusebius volume.  I’m pretty sure Eusebius, author of Gospel Problems and Solutions, had heard that there were things that some people thought were diaphonia.

8 thoughts on “How not to do atheism”