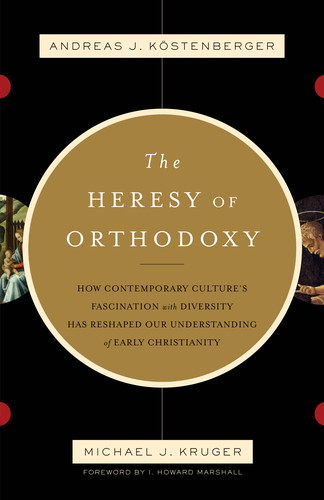 I learn from the blogosphere that an interesting book has been published.  The title is the “Heresy of Orthodoxy”, by Andreas Köstenberger and Michael Kruger, of Wheaton College, published by Crossway.

Tim Henderson devotes three posts at his blog, Earliest Christianity, to a review, here.  The review gives us quite enough to go on, and makes the book seem interesting indeed.

The authors express unease that the clamour for “diversity” in contemporary society is infecting the study of Christian origins.  In particular they assert that much contemporary scholarship projects a quite spurious diversity onto the first century.  The diversity argument cannot be unfamiliar to any of us.  According to those making it — step forward Bart Ehrman — it’s as if Jesus never taught anything much and as if anyone who ever claimed the name of Christian must indeed be derived from his teaching.  More specifically, they reject the idea that the Fathers actually follow the teaching of the apostles more than anyone else.

This seems absurd to anyone familiar with the Fathers.  The point about heretics is that they did not try to follow a teaching handed down from Jesus, but instead made up their own from ideas around in contemporary society.  We know how how heretical teaching changed; how the disciples of Valentinus felt no compunction in changing his teachings in whatever way they chose.  We know how Tertullian lists the schools of philosophy that each plundered for ideas, and contemptuously tells them that the teaching from Jerusalem has nothing to do with the Academy or the Stoa.  Quite why we are supposed to believe that those heretics whom we see being careless about transmitting doctrine in the second century were somehow careful when we cannot see them I don’t know.  We know which groups in ancient society cared about being faithful to the teaching once delivered to the saints, and which did not.

Ehrman has also done his bit to convince people that ancient texts are not transmitted to us.  I’ve met his disciples online, and every one of them has been taught to take up an attitude of obscurantism.  It is more than slightly irritating for those of us interested in ancient texts and transmission to learn that funds for textual criticism, to repair damage so that we can consult texts, are funding a man who is preaching that textual criticism is fundamentally an illusion.  Again the authors attack this, and rightly so.

So it is good to see this book being produced, and the arguments made all seem rather sound to me, in as far as I can tell what they are from the reviews.  to read it.

Tony Burke of Apocryphicity also reviews the book here and here from a position of disagreement with their thesis, and their religion!  But he really tries to be fair, despite his evident loathing, which is nice to see.

UPDATE: I have corrected the publisher details.  And I’ve found that the book can be obtained very cheaply indeed at Amazon US, and also at Amazon UK if you ignore Amazon and go for the other suppliers on the page, so I have ordered a copy.

6 thoughts on “The heresy of orthodoxy”