In the spring a young man’s fancy, lightly turns to thoughts of foreign holidays, as Tennyson might have remarked in Locksley Hall, but, obsessed with his piffling love affair, for some reason did not.  The sun broke through the incessant rain yesterday, giving that bright winter sunshine which always reminds me of the Mediterranean. 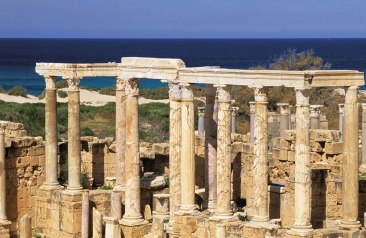 I found myself remembering two trips to Libya, taken with Cox and Kings, who do a very nice Libyan Long Weekend tour.  So I did a Google search, and found myself looking at their Classical Libya tour.  By coincidence the next one is on the 19th February, the day after my current contract at work finishes, so I could take a week then without fear of disappointing my clients.

On holiday, the hotel is all.  I’ve stayed at the Corinthia in Tripoli, which was truly excellent.  But this tour would also take you to Benghazi, to visit Cyrene and Apollonia, which means two nights over there.

Geographically the country is fundamentally two countries, linked by a narrow strip along the coast.  The area around Cyrene had and has a very different culture to that around Tripoli.  In ancient times the former was Greek, while the latter was Punic or Latin.  Even today, the two populations have local loyalties which outweigh any idea of “Libya” as a whole.

So to visit Cyrene means staying at some rather less good hotel.  The page lists the Al-Manara, which doesn’t get too bad a write up in TripAdvisor, except as being very noisy.  Maybe I should consider it.  I must admit that I have always wanted to go there.

But the instability in Tunisia raises questions.  Will it spread to Libya, one wonders?

Perhaps the answer is to book, and merely ensure one has good cancellation travel insurance.  I admit that I am still irked, a year on, that Voyages Jules Verne, and their partner in crime, europAssistance insurance, helped themselves to $350 of my money under various pretexts when I had to cancel my trip to Syria last year.  I don’t need a repeat performance.

I also looked for their Libyan Long Weekend tour, which I remember so fondly.  I notice the price has dropped quite a bit — a consequence of the recession, no doubt.  But that doesn’t go until April.

Hmm, what to do?  Probably sort out the insurance first, I suspect.

4 thoughts on “Thinking of Libya”