For the last few days I have been dipping into a general tourist guide to Rome at odd points during the day.  It’s been very pleasant, imagining myself there, thinking of the Piazza Navona or the Spanish Steps, or the little shop not far from the Pantheon where one can buy bread and cheese and other essentials. 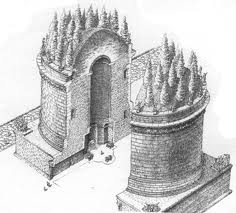 But today I found myself reading a section about the Appian Way, running south-west from the city.  The Baths of Caracalla I have seen; but beyond these the road runs out through the Aurelian walls of Rome, and down past various catacombs to the tomb of Cecilia Metella (reconstruction image left from here).  The circus of Maxentius is nearby, and the guidebook vaguely refers to the ruins of an “imperial palace” nearby.

What does one do?  Has anyone any tales to tell?

I mistrust taxis in Rome.  I well remember picking up a taxi at Termini to go to my hotel — which was almost walking distance away — and noticing with surprise that the meter started, not at zero, but at 20 euros.  That was a pricey trip; and when the time came to return I walked back.

I must go to Rome again.  Only … my last visit was by myself, to photograph a manuscript.  It was cheap enough to do, and to take a flight by Easyjet — was it Easyjet? — to Rome and an Easyjet minibus as far as Termini.  But it was a lonely trip, really.  I remember feeling lonely while I was there.  My other trips have been as part of tours, with people to talk to if I wanted.  Perhaps I need to find a Rome tour that will do much of this with me.  But where, I wonder?

14 thoughts on “Dreaming of Rome”