A commenter added some very useful links to my last post on this.  The following is another drawing (from here) of the ruins of the temple of Sol Invictus, as they were before 1704, in a drawing by Jan Goeree.  The top bit is uninteresting, but the portrait at the bottom is another matter. 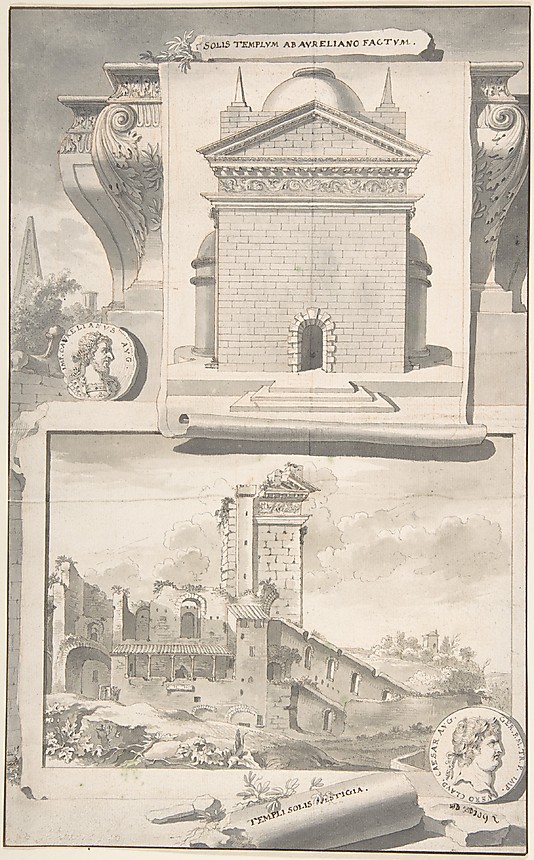 The same commenter pointed out that Bill Thayer has an article online with much useful content about this edifice.  The article adds that it might, indeed, not be Aurelian’s temple at all, but rather a temple of Serapis.  Here is what it says about the ruins (over-paragraphed by me):

In the gardens of the Palazzo Colonna considerable remains of a great temple were standing in the sixteenth century, consisting principally of part of the cella wall of peperino and the north (right) corner of the façade and pediment. This was known as the Torre Mesa, Torre di Mecenate, and Frontispizio di Nerone; LR, fig. 166 from Du Pérac,º Vestigi, pl. 31 (1575).

Part of these ruins were removed at the end of the fifteenth century, and more between 1549 and 1555, but the final destruction of the Torre itself was not effected until about 1630 (LS III.203‑205, and earlier references there given).

Numerous drawings and plans of these ruins are extant, made by the architects and artists of the period, from Sangallo [2] (Barb. 63v., 65, 65v., 68v.) in the fifteenth century to Giovannoli (Ill. 47) and Donati in the early seventeenth century (for list see HJ 422, n79; LS loc. cit.; DuP 141);[3] the plans, however, by their differences in detail show that they have been arbitrarily filled in.

The building stood on the edge of the hill, on the west side of the present Via della Consulta, and extended due east and west, with a great flight of steps leading from the platform at the rear of the cella to the plain some 20 metres below.

This flight was curiously built, being divided into double narrow rows of steps on each side with a central space. The temple area was surrounded with a wall containing niches but not with the usual porticus. The cella was built of peperino lined with marble, and was surrounded by marble columns in front and on the sides. The shafts of these columns were 17.66, the capitals 2.47, and the entablature 4.83 metres in height.

The corner of the pediment now lying in the Colonna gardens is the largest architectural fragment in Rome, its dimensions being 3.70 by 2.80 by 3.90 metres, and its weight 100 tons.

Interesting to learn that a 100-ton corner of the pediment still exists.  Does anyone have a photograph?

The article above includes a great number of abbreviations, which makes it rather hard to look any of the items up.  What I’d like to see is some of the pictures and plans.

Du Perac is Etienne du Perac, Vestigi Dell’Antichita Di Roma, Rome, 1575, that much I can find.  It seems to be online at Gallica here, although the quality is very poor indeed.  But even from this I can see that Du Perac’s book must be stunning, if one could get a decent copy.  Here’s his picture: 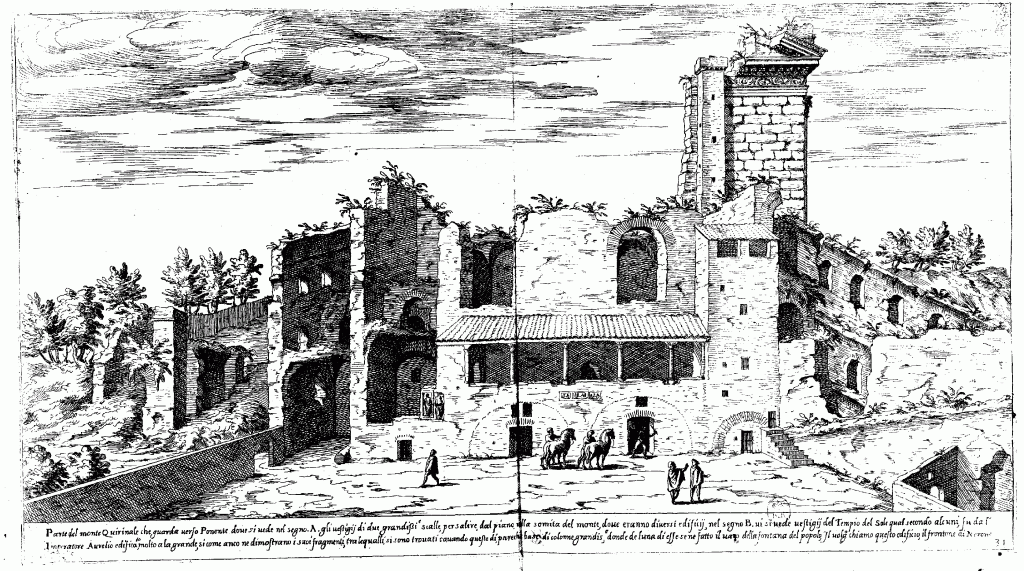 (Du Perac also includes an image of the Septizonium!)

I found that Smith, Dictionary of Greek and Roman geography, vol. 2, p.830, also has an article on the Aurelian monument:

By those who assume it to have been on the Quirinal it is identified with the remains of a very large building, on the declivity of the hill, in the Colonna gardens, on which spot a large Mithraic stone was discovered with the inscription “Soli Invicto.” (Vignoli, de Columna Antoniniana, p 174). This position may be very well reconciled with all the accounts respecting the temple. Becker that it is mentioned in the Notitia in the 7th Region (Via Lata). But this Region adjoined the western side of the Quirinal and the temple of the Sun may have been recorded in it just as buildings on the declivity of the Aventine are enumerated in the 11th Region or Circus Maximus. In the Catalogus Imperatorum Vienn. (ii p 246 Ronc.) it is said of Aurelian, “Templum Solis Castra in Campo Agrippae dedicavit” and it will appear in the next section that the Campus Agrippae must have been situated under this part of the Quirinal. …

Vignoli is online here, and the item proves to be a tauroctony, 4 “palmos” high and 8 broad, found in the Colonna temple. 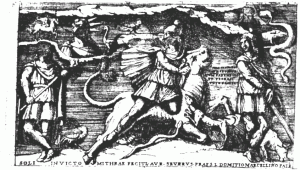 Does this really have anything to do with the temple?

But I’d still like to see a collection of all the images and floor plans of this monument!

3 thoughts on “More on Aurelian’s temple of the sun”