We all know that during the 4th century the emperor Constantine constructed a Roman basilica over the grave of St. Peter.  This was replaced during the renaissance with the current structure, as the old church had become structurally unsound during the interval.

A reconstruction of the old church, drawn in 1891, is here: 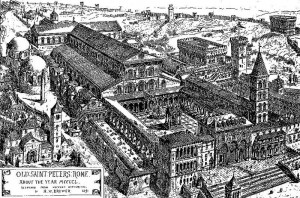 It would be interesting to know the authorities on which this drawing was based.  Are there, indeed, old sketches of the basilica?  There surely ought to be!  And it was a Roman basilica, preserved intact, so should be of interest to classicists.

6 thoughts on “The church that Constantine built over the grave of St. Peters, 1450”