Ancient works were frequently divided into many books.  What did the end of a book look like, in an ancient roll?[1]

To answer this question requires examining papyri which contain such items.  Francesca Schironi assembled a dossier, with photographs, of 55 papyrus fragments, 51 of them from Homer.  Her analysis is very dense, and her conclusions deserve to be more widely known.

Two symbols are used in a great many of the papyri in this context.  The symbols are mentioned among various forms of punctuation by Galen in Peri Alupias 14-15[2].  These are the paragraphos, and the coronis.

The paragraphos is a horizontal line in the left margin, extending under the first few letters on the line.  It is used to divide chunks of text in various ways, of which the end of a book is just one.[3]

A coronis looks like a bird standing upright and looking to the left, and has been connected with korwnh, or “crow”.  In the Palatine Anthology of Greek verse, Meleager says:

I, the coronis announcing the final lap, the most trustworthy guardian of the enclosure of written sheets, proclaim that Meleager has brought his labour to an end, having gathered all the works from all lyric poets into one collection and having wrapped them into this roll.  And that from flowers he has twined together one poetic wreath worthy of remembrance from Diolces.  And, curled in coils like the back of a snake, I am sitting here enthroned beside the conclusion of his learned work.[4]

An example from P. Berol. inv. 9875, column 5, may be found online here, courtesy of an anonymous papyrologist in Wikipedia.[5]  This dates from 400 BC, contains a part of the Persae of Timotheus of Miletus, and shows both the coronis and paragraphos: 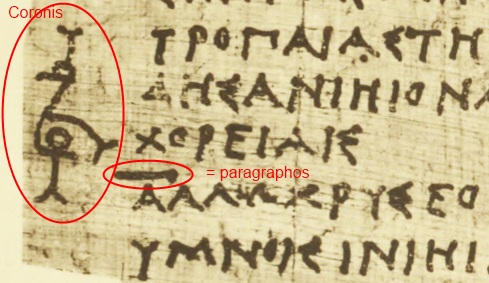 A less good image of the same material may be found here.[6]  The paragraphos, from the1st century onwards, is always “forked” at one end.[8]

The end title is usually written in somewhat larger letters, usually after a line or two has been left blank.[9]

4 papyri have the symbols, but no end-title.  All are early (second half of 3rd century BC to second half of the 1st century BC), and tend to suggest that the use of the end-title in Homer developed in the Roman period.[10] Dramatic papyri of the Ptolemaic period do contain end-titles, however.[11]

One papyrus, numbered 2 by Schironi, has none of these signs or titles, and is one of the oldest, dated to the second half of the third century BC.  It does demonstrate that even early rolls of Homer contained more than one book.[12]  And it is the only Ptolemaic papyrus of Homer not to have some form of division markers.[13]

In the Roman period, a roll of epic poetry would be organised as follows:

The same organisation appears in codices, of which examples appear from the 3rd century AD.

The remainder of the papyrus rolls are damaged in various ways, and so cannot be interpreted certainly as evidence.  None contradict the impression given by the data above.

A further element at the end of the book is the versus reclamans.  This is the first line(s) of the next book, written immediately after the last line of the book.  It indicates, therefore, which is the next book; what the order of the books in the work may be.  5 Homeric papyri have these.  Two of these are clearly the end of the roll, indicating that the next book was in a different roll.[16]  The reclamans became unnecessary with the development of end-titles, and is not found in any example of Homer after the 2nd century AD.  Yet it persists in prose texts later, and indeed is found in medieval manuscripts of texts such as Herodotus, Dionysius of Halicarnassus, and the biblical book of Kings.[17]

There are also sometimes stichometrical annotations at the end of a book — a count of the number of lines.  These indicate that some rolls contained 4 books.[20]

The end-titles in other types of literature had some differences.  They usually consisted of the name of the author in the genetive, following — often on a new line — by the title of the work in the nominative.[21]  Some texts circulated without an author’s name; sub-literary grammatical texts, glossaries, astrological texts.[22] There are cases of works by very well-known authors where only the title is given.  Homeric papyri do not name the author.  Likewise a papyrus of Sappho is known with no name, although another exists which does.  A collection of 8 oratorical manuscripts likewise fails to include any names of the authors; Demosthenes, Isocrates, Hyperides.  But the hypothesis is that these all consist of manuscripts containing works by only one author; and that the name, therefore, probably appeared at the beginning, or end of the whole volume.[23]

The name of the work can appear in these genres in a number of ways:

Schironi does discuss beginning-titles briefly.  16 manuscripts of hexametric verse display beginning-titles, but only 13 are certain (7 rolls and 6 codices), all dating from the 2nd-6th century AD.  The beginning title is not associated with any symbols.[25]

I think we may all agree that this is very interesting indeed.  The differences by genre are apparent; the text of Homer, the ‘bible’ of the Greek world, might be expected to differ in some respects from other texts.

There is certainly room for a further study, to cover the same ground with respect to the Herculaneum rolls.  Let us hope that someone undertakes it!