I have just stumbled upon a couple of very nice photographs of some very, very nice sculptures in the Louvre.  Here’s one: 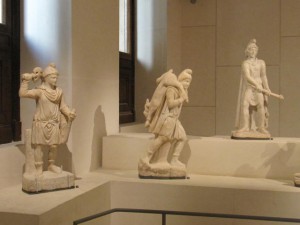 The image is on Picasa, here.  Blessedly the photographer, Julianna Lees, has also photographed the notice boards that went with the images, and written a note:

Louvre, New Galleries, The Roman Empire in the Eastern Mediterranean – sculptures from the Mithraeum at Sidon, Lebanon, marble, 389 AD.  Mithras, sacrificing the bull, is surrounded by the figures of his cult, Cautes and Cautopates with  their torches, the double axe of thunder, etc.  The winged figure with a lion’s  head represents Kronos.  The Mithraeum was discovered in 1887 by Edmond  Durighello, an eccentric antique dealer who did not reveal its exact  whereabouts.

Now that certainly piqued my interest!  Very late but very nice sculptures of items that we normally see only in low-relief, often in grotty photos.  And … “a lost Mithraeum”?

Sidon is in Lebanon, which was part of French Syria during the first half of the 20th century — the happiest days that part of the world knew for 2,000 years, I’m sure — and naturally finds from there ended up in France.

Vermaseren discusses the Sidon Mithraeum in the CIMRM, I see, entries 74 onwards.  And … in his time, these weren’t even in the Louvre:

About the Mithraeum at Sidon (Saida), the article of the journalist Durighello, which has been published again by Reinach, does not give satisfactory explanation. Part of his statements, especially those about the finds, is based on the truth; according to de Ridder, however, one has “demesurement grossi l’importance d’une decouverte reelle”. Beside the statues, niches are mentioned, in which they shall have been placed, and a tesselated floor. According to the seleucid era the Mithraeum must have existed in the second century, assuming, however, the autonomic era of the city itself, the sanctuary existed in the fourth one. The last dating has been proposed by E. Will in Syria XXVII, 1950, 261ff, especially the name of one of the dedicators Fl. Gerontios points into this direction. The collection of sculptures (coll. Peretie) was bought by de Clercq in Paris in 1882 and is now deposited with Comte Louis de Boisgelin, 5 Rue Masseran, Paris (VII), To his kindness we-owe that we have been in the opportunity to study the documents.

I shall work on all these, and try to add as much as I can to the Mithras site.  There must be other photos of so nice a set of items!