There have been vague reports on twitter for a few days of a 4th century Coptic church, the “Virgin Mary church”, being burned by the Moslem Brotherhood’s thugs in Egypt.  Today I find something solid, and it looks grim.

As Muslim Brotherhood supporters continue their jihadi rampage on Egypt’s Christian churches—several dozens have now been attacked—it’s important to remember that their hostility is not simply directed to churches, but any and every expression of Christianity, including crosses, Bible stores, and even remote monasteries.

The news link above leads to an Arabic language site, but we can use Google translate to get the gist:

Supporters of imprisoned president set fire to the Muharraq Quisya centre in Assiut. 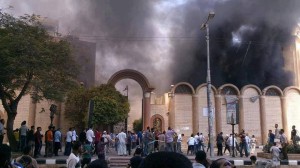 Sparked hundreds of supporters of President Mohamed Morsi, isolated in Assiut, in the early hours of Thursday morning, the fire in the Diocese monastery Muharraq Qusiya center , and the flames spread to more than 15 homes adjacent to the Copts.  The civil defense forces are trying now to control the fire that broke out in the monastery of the oldest monasteries in the archaeological world.

This comes after the establishment of thousands of supporters of President isolated march night protest through the streets of Center City Qusiya condemn the decision of the curfew and the imposition of emergency law, in addition to resolving Aatsami “fourth Adawiya” and “Renaissance” by force by the police and military forces and the accompanying casualties.

In a related development, a number of supporters of President Mohamed Morsi, isolated fired two shells from guns “mortar” on a police station Sahel Selim, east of the Nile Assiut Governorate, in an attempt to storming resulted in the demolition of the center and interface wall.  Military sources said that the car tracked armored and armed forces on their way to the police station amid heavy exchange of automatic weapons fire between the security forces and a number of supporters of President orphaned.  The sources said that it had been determine where it launched a missile village “Boit” east of the Nile and the reinforcements being sent military and police, sources reported that there were casualties among the security forces Safwat.

The Al-Muharraq monastery has an English language website here, and a short Wikipedia article here.  The Tour Egypt site has a long page on it here, which includes something on the library:

The library of the monastery is divided into two main sections. The first  section contains thousands of modern books and reference material dating from  the 19th and 20th centuries. They cover religion, science and other subjects  written in various languages including Coptic, Greek, Arabic, English and  Amharic. The second section of the library contains hand-written manuscripts in  Coptic and Arabic. Scientifically indexed, these priceless manuscripts date back  as early as the 13th century.

The monastery website helpfully explains the various names of the monastery, including the name of the “burned monastery”, and “Deir al-Muharraq”.

For a long time the place has been well known as “Virgin Mary monastery”. It has also been reputed as “Muharraq Monastery”, and “Mount Koskam Monastery”.

But it does make clear that the monastery has a manuscript library:

There has been a great interest in Coptic manuscripts whether they are originally in Coptic language or translated into Coptic since the European movement of geographical and scientific discoveries. Travelers, explorers, researchers, scholars and scientists collected manuscripts from ancient monasteries and churches, and took home all what they could during the 17th. century when the Europeans began to take interest in studying Coptic language (stated by Mallon in his introduction to: Coptic Agronomy)

Some famous transcriber monks are:

Hegomen Kuzman (14th. C.) who cared for copying some books of the Holy Bible.

Hegomen Yohanna (19th. C.) from Etleedem copied 64 manuscripts within 48 years. He was worthily called the father of transcription.

Some important manuscripts in the monastery have been printed and published.

However the main churches are apparently 19th century.

The Coptic Encyclopedia has an article on Dayr al-Muharraq (why on earth can’t the Arabs organise among themselves a standard transcription of their language?):

Nothing is known for certain about the date of the foundation of this monastery. A sermon attributed to the patriarch THEOPHILUS OF ALEXANDRIA (384-412) credits him with a vision of the Holy Virgin in which she revealed to him that the principal church of the monastery in the place where Mary and her son sojourned during their flight from Herod was consecrated by Jesus himself, assisted by his disciples. Guidi (1917) has published the Oriental versions. The Arabic text is also given in a work entitled Al-La’ali’ (1966, pp. 56-70). A reworking of this sermon is attributed to Zechariah, bishop of Sakha at the beginning of the eighth century (pp. 40-55).

The monastery is said to have been founded by Saint PACHOMIUS (Simaykah, 1932, Vol. 2, p. 121), but the Lives of Pachomius, both Greek and Coptic, do not speak of it. The most ancient source appears to be the HISTORY OF THE PATRIARCHS of the Egyptian church, which in its list of the places where the Holy Virgin stayed with Jesus in Egypt names Qusqam, but not Dayr al-Muharraq.

The clearest source is without doubt ABU SALIH THE ARMENIAN from the beginning of the thirteenth century (1895, pp. 224-27). He knew the legend of the Holy Family’s FLIGHT INTO EGYPT and of the consecration of this church, but he never spoke of a monastery.

A manuscript of the Synaxarion deriving from the library of the Dayr al-Muharraq indicates the feast of the qummus ‘Abd al-Malak on 18 Babah. This saint built or restored the Church of Saint George. He lived in the Arab period, prior to the date of the manuscript (1867, according to Troupeau, 1974, Vol. 2, p. 30).

In 1305 Marqus, bishop of Qusqam, was present at the preparation of the chrism (Munier, 1943, p. 37), and in another manuscript about the same event, Marqus is called bishop of al-Qusiyyah. Since the monastery is only a little over 4 miles (7 km) from this town, he was probably bishop of these two places (Muyser, 1945, p. 158).

In the fourteenth and fifteenth centuries, several monks of Dayr al-Muharraq became patriarchs of Alexandria: in 1370 GABRIEL, in 1378 MATTHEW I, in 1452 MATTHEW II, and in 1484 JOHN XIII.

So the solid evidence is of foundation before 1300.

But what of the manuscripts?  I can find no more information online.

It’s so very hard to get useful information, because the BBC and other “mainstream” outlets seem to be ignoring most of the violence, and all of the violence against Copts.  Thank heavens for Jihad Watch and its staff, trawling through the Arabic news output.

If anyone has more details, I should be glad to hear it.