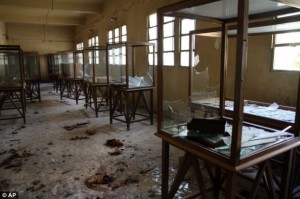 Egypt’s famous Malawi National Museum has  been ransacked, looted and smashed up by vandals in another example of the  recent unrest in the country.

Photos of the damaged artefacts and empty  display cases were released this afternoon as supporters of deposed President  Mohamed Morsi fought a gunbattle with security forces in a Cairo  mosque.

According to a statement made by the Ministry  of Antiquities, the museum, in the Upper  Egyptian city of Minya, was allegedly broken into and some artifacts were  damaged and stolen on Thursday evening.

Scroll down for videos

It not yet clear what is missing – a list is  being compiled to ensure the artefacts are not smuggled out the country.

All of which is very bad.  But there is worse yet, improbable as it may seem.  At the bottom of the article we read:

We are no longer accepting comments on this article.

We need hardly ask, in these days of political correctness, when expressing negative opinions about certain favoured groups is a matter for the police, why the proprietor of the newspaper has instructed his staff to ensure that ordinary mortals are not permitted to express their disgust.  What hope for the civilised world, when the defenders of it are not permitted even to object to the actions of the barbarians?

It is as if Luke Skywalker were not permitted to mention that Darth Vader had something to do with the Death Star.  Such a path must bring ruin on the world.

While we are still permitted to say anything — the BBC has omitted to report on all this — here are some more of the photos that the Mail posted. 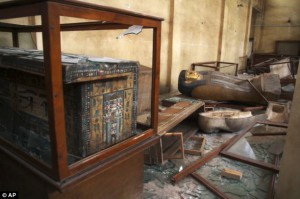 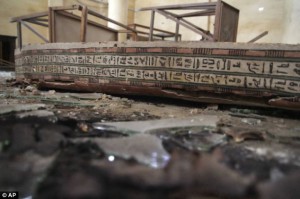 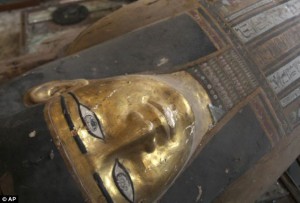 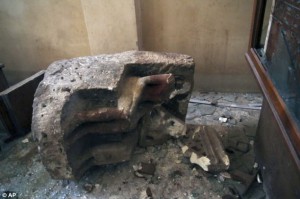 Update: I see no sign of BBC reporting this story.  Protect the Pope has a list of further attacks on churches, equally unreported.

Update2: With some difficulty, I eventually found a BBC story by John McManus, reporting on some of the attacks on churches, from yesterday (16 August 2013).  It’s not very good, nor very visible:

At least 25 churches across Egypt have been attacked by arsonists in a wave of anti-Christian violence, a non-governmental group has said.

Homes and businesses have also been targeted, the Egyptian Initiative for Personal Rights (EIPR) says.

But his Muslim Brotherhood supporters say it is the military regime that is instigating the violence.

It is impossible to say whether the decision to break up the pro-Morsi camps in Cairo was the trigger for the church attacks.

But Egypt’s minority religion has often borne the brunt of discrimination and violence from some Islamists.

The article does not state at any point who is actually doing the violence, preferring to suggest that these are claims by one group.

We should note the scare quotes in the heading, and the claim that violence is from “some Islamists”.   Perhaps the BBC could do a little more, and use its correspondents on the ground to investigate the facts?

11 thoughts on “More Egypt vandalism: the museum in Minya attacked and looted by Muslim Brotherhood”