From Christian Today (6th September) comes news of yet another political arrest of a street preacher in Britain, this time in Basildon in Essex (also at Christian Concern): 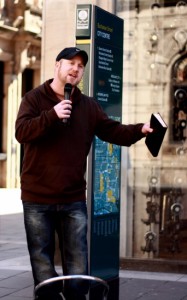 A street preacher was arrested in Basildon on Wednesday following a complaint by a member of public.

The Christian Legal Centre reports that Rob Hughes was held for seven and a half hours at Basildon police station before being released without charge at around 11:30pm.

The CLC reports he was detained under Section 5 of the Public Order Act on the grounds that he “caused harassment, alarm or distress”, an accusation he denied.

The centre assisted him by providing a solicitor to help him during the police interview.

“I am so grateful that the Christian Legal Centre was able to react quickly and effectively in my situation,” said Hughes afterward.

He added that he felt Christian street preachers were being “presumed guilty until found to be innocent”.

Holding a man in a cell for seven and a half hours, right up until almost midnight — clearly some kind of legal threshold beyond which they will get into trouble — smells very bad.  This is what Wimbledon did to Tony Miano.  No normal arrest would be held so long.

Rob Hughes is associated with Rev. Josh Williamson of Craigie Reformed Baptist Church in Perth.  The latter tweeted that Rob was released without charge.  The two were working with Operation 513: Essex, who have an account of what happened here:

The Operation 513 Team evangelized Basildon today and we were blessed with fabulous weather.  The team consisted of Rob, Chuck and Myself and a young man named Sasha who lived nearby and had contacted me through the website.  We set up and prayed.  This was Rob’s first time in Basildon and it was his first outreach since coming back from Canada, therefore it was his job to start !!  Rob began to preach using his new amplifier which is very loud and clear; he was soon approached by a man who said “the ten commandments were great advice for life”.  However, as Rob unpacked the commandments the Holiness of the Law began to expose the man’s sin to which he began to get angry and walk away.

As Rob continued more people gathered to listen and/or heckle.  A young couple came up and began to ask “why we were forcing our beliefs on people” etc.  Rob dealt with the arguments very succinctly and soon the girl confessed to being a pagan.  The conversation was cut short by a lesbian yelling that we were “judgmental”, to which Rob turned the accusation against her and asked her not to judge us either.  Another lady asked about Bible translations and was thankful for the answers she received.  A girl named Sarah who grew up in a Christian home also had a number of good questions and the Gospel was preached to her.  Also a grandmother and her daughter and grandchildren came up and asked “the problem of evil question” relating it to specific events in their life.  Rob responded with empathy and decorum to which the grandmother kind of appreciated his response but her daughter was not interested.

We eventually encountered a  “christian” lady who said we were not preaching the Gospel but preaching condemnation.  She was very frustrating and tried to stand infront of Rob and tell everyone that “God loves everybody and has wonderful plan for thier life”.  It made me question if she had ever read Ps 5:5, 11:5, Mal 1:3, Rom 9:13 etc or the large number of passages that explain about Gods hatred and anger towards human wickedness and sin.  Anyways, Rob countered these foolish objections by reading John 3.16-20 which makes clear that God’s love is for those who repent and those who do not repent are already condemned.

During the course of the afternoon many hecklers came and went but the content of the message had obviously offended the lesbian, because she called the police.  Soon enough the police arrived and questioned the crowd of angry bystanders who were telling all sorts of lies about us.  The police did not ask Rob to stop preaching but waited till he had finished before questioning him.  Eventually the police arrested Rob for breaching Section 5 of the Public Order Act claiming that he had used language that “caused harassment, alarm or distress”.  Rob was taken to the Basildon Police Station and I called the Christian Legal Center for help.  Later that evening the CLC lawyer arrived and had an interview with Rob and the Police and all trumped up charges were dropped with no further action to be taken !!

Rob was vindicated but felt vilified.  It does remind me of when Jesus tells His disciples “Blessed are you when others revile you and persecute you and utter all kinds of evil against you falsely on my account. Rejoice and be glad, for your reward is great in heaven, for so they persecuted the prophets who were before you” Matt 5:11-12.  By Gods grace we live to preach another day, Praise be to God!! SDG.

All of this should lead us, as Christians, to prayer.  Let us thank God for the witness of the gospel on the streets, and the courage of Rob Hughes and his fellow-workers in Christ.  Let us also praise God for the work of the Christian Legal Centre.  Let us also pray for this poor country, where the preachers of the gospel may be arrested at the whim of any malicious person.  Finally, let us pray for that poor woman who informed on the evangelists.  May God have mercy on her and show her the more excellent way.

Finally let me pass on the appeal of the Christian Legal Centre (via Anglican Mainstream):

Can you help us keep our free legal hotline open for Christians like Rob? (Donate here)

And please pray for street preachers up and down the country, that God would use them to bring many people into the Kingdom.

In fact, we are also handling another case of a street preacher who was arrested in London earlier this week. We cannot say anymore at this stage for legal reasons but please pray for a just outcome.