Last year Josephus scholar Louis Feldman wrote a tentative article in support of the hitherto fringe idea that Eusebius of Caesarea composed the so-called Testimonium Flavianum found in Josephus’ Antiquities of the Jews, book 18.[1]  On p.26 we find the following statement:

There is one phrase in the Testimonium that, while it has been noted by several scholars, has not been sufficiently emphasized, namely, eis eti te nun (still to this day), referring to the fact that “still to this day,” “the tribe of the Christians, so called after him, has not disappeared.”

This brief phrase, I would like to suggest, may–I repeat, may–give us the key to the whole puzzle as to the legitimacy of the Testimonium Flavianum. That key is now available to us because of the compilation during the past few decades of the Thesaurus Linguae Graecae, the complete dictionary of all the Greek words in all the extant Greek literature. In such a thesaurus, one would expect such a phrase to appear not hundreds but thousands of times, and it does appear frequently; but the only writer in this entire collection of many thousands of Greek texts to use this phrase with the words in this order, aside from Josephus, is Eusebius, in whose writings it appears three times. This phrase thus appears to be a favorite of Eusebius and of no one else, at least of extant writers from that period.

Now this seems really rather impressive (to me, anyway). But we must always verify our facts.

Let us do a textual search on the TLG for eis eti te nun.  What do we get? 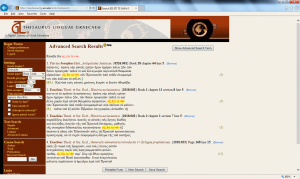 We get precisely four results.  I’m not sure what search term produced “frequent” results.

1. The first result is Josephus himself.  So far so good.

2. The second result is … erm … Eusebius quoting Josephus in the Church History book 1, chapter 11, verse 8; English translation here.  This, of course, is neither here nor there as far as Feldman’s theory is concerned.

It is not obvious from this list of data just why this means that Eusebius composed the TF.  So at this point we may ask ourselves what Feldman’s argument was again.  It would be advisable to place the argument in our own words — to avoid the danger of being influenced by rhetoric —  and to make explicit any inferred arguments.

Feldman’s argument would seem to be as follows:

I think most of us will be perplexed a little at this logic.

The first part of the argument seems very risky in a number of ways.  The phrase is a simple one, and ought to appear, as Feldman acknowledges, all over the place.  But the TLG as it stands reports only 4 results.  It would seem possible, therefore, that the TLG database is not representative of Greek literature or speech.  Since only 1% of ancient literature is preserved, and the TLG contains only a portion of that 1%, it is not impossible that this supposition is correct.  But if the TLG is not comprehensive, then the presence of only 2 authors in the search means nothing; only that the TF is not comprehensive.  In regard of completeness, it is suspicious that no other quotations of the TF appear in the results.  Is it really the case that no later Greek author quotes the TF?

Likewise a phrase of 4 words is not much of a fingerprint.

Finally, arguments from parallels are always dangerous, because trivial parallels can be mistaken for significant fingerprints.  They can arise in a great number of ways, and do not necessarily involve connection, never mind derivation.  For instance literature derives from oral speech.  Phrases appear in multiple places in modern literature, not because the authors know each other but because of some other source.  The popularisation of the term “chillaxing” by British Prime Minister David Cameron in 2010 will undoubtedly have left its mark in the literary record; but woe betide any subsequent scholar who draws conclusions from comparing literature, rather than seeking its real origin.

The fourth part of the argument is a non-sequitur.  If we allow a connection, it may arise in a number of ways.

The first possibility is the simplest.  Let us suppose that Josephus wrote those words.  Let us suppose that Eusebius copied them for the HE I, liked the phrase, and, having it in mind, repeated it when he composed book II, and, later, in the GEI.  What could be more natural?  What need is there to suppose anything other than copying?

There is another, many-headed alternative.  For this we need to consider the second quotation of the TF by Eusebius, in the Demonstratio Evangelica, book 3, chapter 5.  This does not appear in the search because, simply, it has a different text: “ὅθεν εἰσέτι νῦν ἀπὸ τοῦδε τῶν Χριστιανῶν οὐκ ἐπέλειπεν τὸ φῦλον.”

Why are there two versions?  Is Eusebius quoting from memory and tripping up, or using different copies of the text? — for how else can the same quotation have two different wordings?

But if he is quoting from memory a favourite saying then why does he get it wrong?  This, surely, is evidence against the “favourite” argument.

If he has access to copies with two different versions, then of course there is a textual problem at this point with Josephus in transmission, which means that arguing from a parallel in the text is pointless because in this case we don’t know what the text is.

We might also consider the well-known phenomenon of harmonisation.  This is most familiar to us from the New Testament and the Lord’s Prayer where — I am told — the version in Luke tends to become assimilated to that in Matthew in the manuscripts, as the former was more familiar.

Now Eusebius HE is a common text.  Josephus’ Antiquities 11-20 is comparatively a rare one.  The TF was so well known by itself that it intrudes into Josephus Jewish War.  The conditions are right for assimilation in transmission.  Do we know for sure that, far from Eusebius composing the TF, the copyist of the 9th century ancestor of all our modern mss. of Antiquities 11-20 did not harmonise the text with the HE, conciously or otherwise?

We do have evidence that assimilation did occur in versions of the TF.  Jerome quotes in Latin in De viris illustribus a somewhat different version of the text.  But I am told that in the Greek translation of DVI, someone has “corrected” the TF to the version found in Eusebius HE and Josephus.

On the other hand, the DE is also a rare text.  Evidently harmonisation was not that commonplace.

But if we do assume a connection, and we allow for harmonisation, then it is equally likely that the Josephan TF is merely a scribal copy of the Eusebian version in the HE, itself probably corrupt, and that the real text is lost.  If Eusebius (or his literary assistants – we must remember that there are problems with the quotations in the HE) did write down the TF from memory, and did so differently in the HE and DE, then of course errors of memory are possible and Eusebian phrasing may be introduced by a normal text-critical path.

Some will also feel rather concerned at the tiny data volumes – 4 words, 2 quotations – involved.  Are these numbers large enough to be statistically significant?  Databases can tell us much, but they can also mislead if used without awareness of the pitfalls, and without devising a way to exclude false positives.

In short, the argument put forward by Prof. Feldman is interesting but unconvincing.  The data does not require the hypothesis of Eusebian composition in order to explain it.

UPDATE (17/2/17): In a new article, atheist Richard Carrier complains here that, for the purposes of the theory, I should have searched for eis eti nun instead of the exact phrase in the text of Josephus, eis eti te nun.  In fact I just searched for the “brief phrase” that Feldman gave, and I didn’t look further for ways to make it work.  But let us by all means discuss this in a separate post when I have had a chance to look at the TLG.

13 thoughts on “Feldman, the Testimonium Flavianum, Eusebius and the TLG”